William Doyle, an Associate Professor of Economics at the University of Dallas, has penned an article Friday in The Federalist titled "Why the Wall Street Journal Is Wrong About The 2020 Election."   The WSJ had published an editorial on Tuesday, saying that while some election rules were bent, there was no massive voter fraud that cost Trump the election.  He lost it because GOP voters defected on his race.  Doyle apparently concurs on the lack of fraud, but demurs on the WSJ's conclusion, instead pointing to a new boogeyman to disbelieve Wisconsin's 2020 election results - the involvement in the election by Facebook's Mark Zuckerberg and his evil non-profit, the Center for Technology and Civil Life (CTCL). 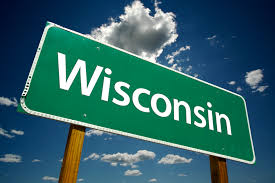 As an aside, I get a chuckle every time Trump and his allies attack Mark Zuckerberg and former FBI Director James Comey.  They are the two people most responsible for electing Donald Trump in 2016.  MAGA world ought to be building statues to honor Zuckerberg and Comey.

At the bottom of the Federalist article, Dr. Doyle is billed as the "principal researcher" at the "Caesar Rodney Election Research Institute," which says it is located in Irving, Texas.  I've never heard of the organization, so I began clicking through the Institute's website.  The Institute's "Our Work" seems to involve nothing more than attacking Zuckerberg and the CTCL on such Trump-friendly media outlets such as the NY Post, The Federalist, Red State, American Thinker, and, unbelievably, RT, a TV network run by the Russian government.

Doyle's rebuttal to the WSJ article is actually a follow-up to a longer piece he wrote titled "The Wisconsin Purchase" which appeared in The American Conservative on December 24, 2021.

Instead of going down the fraud rabbit hole, Doyle launches a new argument to undermine the validity of the Wisconsin 2020 presidential election results - that there was a sinister "shadow campaign" run by CTCL, and funded by Zuckerberg, that pushed Biden over the top in Wisconsin.

Here is a portion of Doyle's pitch:

What happened in 2020 involved a highly coordinated and privately funded “shadow campaign” for Joe Biden that took place within the formal structure of the election system itself. Through the injection of over $419 million of Mark Zuckerberg and Priscilla Chan’s money, laundered through the Center for Technology and Civic Life (CTCL) and the Center for Election Innovation and Research (CEIR), the professional left presided over a targeted, historically unprecedented takeover of government election offices by nominally nonpartisan, but demonstrably ideological, nonprofit organizations and activists in key areas of swing states such as Arizona, Georgia, Michigan, Pennsylvania, and Wisconsin.

Big CTCL and CEIR money had nothing to do with traditional campaign finance, media buys, lobbying, or other costs that are related to increasingly expensive modern elections. Rather, it had to do with financing the infiltration of election offices at the city and county level by Democrat activists and using those offices as a platform to implement preferred administrative practices, voting methods, ballot harvesting efforts, and data sharing agreements, as well as to launch intensive multi-media outreach campaigns and surgically targeted, concierge-level get-out-the-vote efforts in areas heavy with Democratic voters.

Yeah, that is called democracy. Next, Dr. Doyle moves on to outline CTCL's four major (and sinister) "strategic objectives."

According to Doyle, the CTCL funded election offices in Wisconsin aimed at courting a coalition of "people of color, single women, young people and...members of the LGBTQ community" to "replace white working class voters who have abandoned the Democratic party." Doyle goes on to talk about the CTCL's "Wisconsin Safe Voting Plan" which was aimed at encouraging low propensity voters to cast ballots.  He highlights the "extravagant wish list of far-left Democratic election concerns and priorities" the plan would address.

Indeed, it is not unusual in the slightest for 501(c)(3) organizations such as CTCL to engage in voter registration and voter engagement activities.  That such efforts may accrue to the benefit of one party over another doesn't make that work illegal or a violation of the organization's tax status. Conservative and liberal leaning nonprofit organizations have done such work for decades.

At one point, Doyle complains about a clawback provision CTCL includes with its grants which says the recipient must the money for voter engagement type efforts or refund the money to CTCL.   Again, cue sinister music.  But wait...that's an IRS requirement.  If CTCL is handing out grants and the money is used for such non-allowable purposes such as promoting particular candidates or partisan political activities, that could cause CTCL to lose its charitable status as a 501(c)(3) organization.

While Doyle is suggesting wrongdoing by CTCL, it is actually Doyle's Caesar Rodney Election Research Institute which might be running afoul of the law.  Although it bills itself as a 501(c)(3) organization, it seems its only mission is political campaign activity, i.e. attacks on Zuckerberg and the CTCL.  That might violate IRS rules and make contributions to the organizations non-deductible.

If the accusations against CTCL weren't laughable enough, Doyle's analysis becomes even more of a joke when he tries to quantify the effect CTCL's work had on the outcome in Wisconsin.  His chief complaint is the mail-in ballots (he uses the term mail-in ballots and absentee ballots interchangeably) that were cast heavily for Biden.  He notes CTCL money going to five large Wisconsin cities and says that those cities had more a much higher mail-in vote rate than the rest of the state in 2020.  In particular, he cites the 59.8% statewide mail-in rate and that Dane County (Madison) was at 74.4% and Milwaukee County checked in at 70.6%.  Cue sinister music.

Doyle estimates that CTCL's investment in seven Wisconsin counties resulted in an additional 65,222 votes for Biden, enough to more that make up the 20,800 vote deficit that cost Trump the state in 2020.  In reaching this conclusion, Doyle puts together a table in which he lists the 2020 vote results for certain counties, the number of absentee votes and then seeks to quantify the "excess" Biden votes received doing a comparison to the 2016 election featuring Trump and Hillary Clinton. 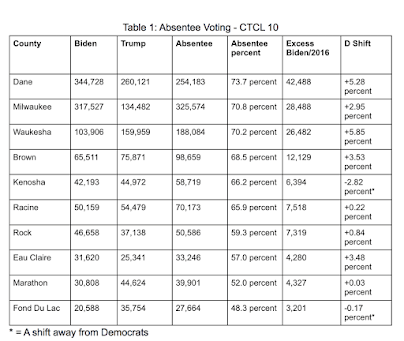 In his response to the WSJ editorial, Doyle singles out Dane (Madison) and Milwaukee counties, recipients of CTCL money as being the chief culprits in the swing of Wisconsin from red in 2016 to blue in 2020.  Doyle notes that Biden ran 364,372 votes ahead in the two counties in a state in which he won by less than 21,000 votes.  How can this be?  Cue sinister music.

A quick review of the two counties do not show anything unusual going on.  In 2016, Hillary Clinton received 75.4% of the vote in Dane County.  In 2020, Biden received 76.8%.  That's a rather small increase and not at all surprising.  Dane County, home to the University of Wisconsin, is dominated by upper middle class suburban whites, a demographic that is increasingly moving to the Democratic column.

As far as Milwaukee County, in 2016 Hillary Clinton received 69.6% of the vote.  In 2020, Biden won 70.2% of the vote, a miniscule increase in an urban county that also is not surprising.  In 2016, Trump won Wisconsin by 22,746 votes.  In 2020, Trump lost Wisconsin by 20,682 votes.  Contrary to Doyle's assertions, the results in Wisconsin were not in the slightest bit suspect.  If anything, the numbers suggest CTCL's expenditures and work didn't make a huge difference.  (Note, to make things simpler, the percentages cited in this analysis do not include thee third party vote for President in 2016 and 2020 which was miniscule.)

I would mention too that Doyle does not even attempt to assert that CTCL did something illegal in its work in Wisconsin?  The fact is, with the claim of voter fraud falling, Doyle is seeking to find another way to de-legitimize the 2020 Wisconsin election results.  He's hoping that the Trump rubes will buy the snake oil he is selling.  And they probably will.

Here is the real reason why Trump lost Wisconsin.  According to exit polls, 4% of Wisconsin Democrats voted for Trump, while 7% of Badger State Republicans crossed over to vote for Biden.  If Republican Wisconsin voters had simply matched the Democrats 4% crossover rate, Trump would have received 36,401 more votes and won the state.

FOLLOWUP:  To be clear, I don't support private money going to government entities to fund operations.   Years ago, we had a state official in Indiana whose salary was paid for by the private sector.  I thought then, and still think today, such a practice is a terrible idea.  While CTCL is certainly free to engage in voter engagement activities, the organization should be doing so on their own or through other private entities, not through the government.  But to be clear, CTCL played by the rules that existed at the time and did absolutely nothing illegal.  What is more, from the election results it doesn't appear the organization's efforts made much of a difference at all in the outcome.  Trump lost Wisconsin because a significant percentage of Republicans crossed over to vote for Biden before voting for GOP candidates down ballot.