Indiana Senator Todd Young's Re-Election in 2022 No Sure Thing

When it comes to Democrats compiling a list of vulnerable Republican Senators, Indiana's Todd Young is unlikely to make the cut.  But a close look at recent Indiana voting trends suggests Democrats have a chance to steal a seat in the Hoosier state. 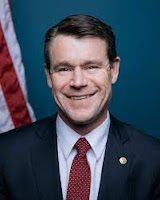 No one was better at driving turnout than Donald Trump.  Rural voters who previously weren't motivated to go to the polls did so in massive numbers during the Trump era, particularly the years when he was on the ballot.  The problem for Republicans though was that Trump not only drove GOP turnout, he motivated Democrats to go to the polls.  That pretty much evened out the score. What defeated Trump in 2020 was GOP-leaning voters in swing state suburbs crossing over to vote for Biden.  Although those voters didn't like Trump, they voted for Republican candidates down ballot.

In 2018, Trump was in the White House but not on the ballot.  That year, the GOP statewide baseline in Indiana fell to 57.5% from 62.1% in 2014.  Nearly every larger suburban Hoosier county saw a relative decline in GOP votes.  Here are the top 12 Hoosier counties ranked by population with the decline in the GOP base vote noted:

While the number of Republican votes in these counties went up in Trump's only mid-term, the Democratic turnout in these populous counties increased even more causing the GOP vote decline.

Obviously the greatest decline in Trump support was in Marion County and its suburbs, including the donut counties of Hamilton, Boone, Johnson, Hendricks and Hancock.

In short, the way the Democrats win Todd Young's seat in the Senate is for rural turnout to return to its pre-Trumpian levels while Democratic turnout in the more populous counties remains juiced.  It would also help if the Democrats could recruit a more moderate candidate who could get GOP crossover vote living in the Indianapolis' suburbs.

Is that possible?  Certainly.  I am not convinced rural voters will continue going to the polls en masse to vote for Republicans when Trump is neither on the ticket or in the White House.  I think it is a bit more likely that the Democrats will continue with higher turnout post-Trump, at least for awhile.

Of course, it all depends on the Democrats recruiting a top notch U.S. Senate candidate to oppose Young.  I'm just not sure the party will do that.  Witness the debacle in 2020 with its gubernatorial nominee, Woody Myers.

Blessings and you are correct the young Mr. YOUNG, altar boy to Mitch McConnell is very vulnerable. But only with the right candidate. If Joe D. backed away there would have to be a Billionaire wanting to throw away the money because as I found out last year the Indiana Democratic Party is controlled by Communists/Socialists. So Hannifa Kalique is the D running from Gary for the D Nomination. No chance outside of Our Revolution endorsement to get votes in the state's blue bubbles. One thing you might not know is the Ron Paul Populist Libertarian side of the party. That is my home Populist Libertarianism. Take a look at my website www.ppsec.us and give me a call if you want to chat... 317.372.3493

There is a Populist Libertarian element in the LP. Rand and Ron Paul folks. I'm a Lutheran Pastor and am exploring taking a run at the young Mr. YOUNG. Take a look at the website...www.ppsec.us