Today is "safe harbor day," the day when states are supposed to have all their election disputes wrapped up in preparation for the electors casting their votes on Monday, December 14th.  Pete Williams of NBC News explains:

States that haven't yet certified their votes for president or that face legal challenges are rushing to resolve any remaining disputes by Tuesday, known as safe harbor day.

Under federal law, Congress must count the electoral votes from states that act by Dec. 8 to choose their presidential electors — the people who meet next week in each state to cast the actual votes for president — and to resolve any remaining legal disputes over their choices. 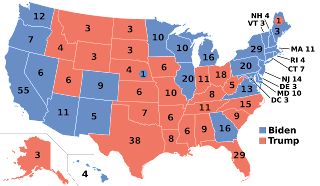 The Electoral Count Act was passed in 1887, after four states sent in votes from two different sets of electors from the 1876 presidential race between Rutherford B. Hayes and Samuel Tilden. Congress had established no mechanism to resolve fights over competing slates of electors, and it adopted the act in hope of heading off future disputes.

Under the law, Congress must count the electoral votes from states that chose their electors and resolve any legal disputes over the choices by the act's deadline, which is six days before the electors meet to vote. Of course, if a state fails to meet the safe harbor deadline but chooses its electors by Dec. 14, Congress can still count the votes.

Individual members of Congress could try to object and claim that a state didn't achieve safe harbor status. But states are nonetheless eager to meet the deadline. It was the Florida Legislature's desire to meet the safe harbor deadline in 2000 that led the Supreme Court to rule, in Bush v. Gore, that the state had run out of time to conduct any further recounts.

The federal law says a state qualifies for the safe harbor protection if it has resolved "any controversy or contest concerning the appointment of all or any of the electors." State court cases remain active in six states that certified Biden as the winner — Arizona, Georgia, Michigan, Minnesota, Nevada and Wisconsin. So they may not be able to claim the protection unless their cases are resolved by Tuesday.

For the record, all states have met the safe harbor deadline except for Wisconsin which is hearing a newly filed legal challenge to a recount of two counties in the state.

Williams seems to thinks Trump's challenge to Biden's apparent electoral vote win will cease with today's safe harbor deadline.  Absolutely not.  Trump and his allies will challenge the electors up until the date Congress announces and affirms the electoral vote on January 6th.

I get tired of people talking about how the "institutions have held."   We have scores of supposed constitutional conservatives trying desperately to overturn the result of a democratic election.  The fact that there are quite a number of points in the post-election process in which they could have accomplished their goal should be alarming.  In many states, it came down to courageous local Republicans refusing to go along with the attempt of the Trump campaign to steal the election and instead insisted on doing their job of certifying the results.  Many of those local Republicans have been or will in the future be the target of angry Trumpers.

Fortunately, the election did not come down to one state's electors.  Likewise, we are fortunate in that the electoral vote is not close.  If, after the votes were counted, the electoral college vote was 270-268 in favor of Biden, the Trump folks would have had to get just one Biden elector to abstain to deny him a majority and hand the election to Trump (via the U.S. House).  You think the Trump people wouldn't have found that Biden free agent elector who was willing to abstain for a pile or money or a cushy job during a Trump second term?   That scandal did not happen following the 2000 election (271-267) because, unlike Trump, the two candidates, George Bush and Al Gore, in that contest were real patriots who cared about what was best for the country.