I don't spend a lot of time on Twitter these days.  It's become a cesspool of misinformation, a forum by which people can live in an alternative, fact-free environment.   A place where people can have their own biases reinforced by like-minded individuals who don't care about actual facts.

Twitter is also where Jenna Ellis, one of Trump's closest attorneys, likes to hang out.  Unfortunately, I often run across posts by Ellis in which she readily regurgitates the most recent Trump talking points. 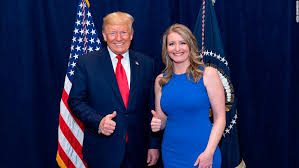 K-file published an expose of Ellis which detailed her previous criticism of Trump...criticism she leveled at the reality show star before he got elected.  CNN reported on the K-file revelations:

Jenna Ellis has been one of President Donald Trump's most ardent defenders since joining his campaign as a legal adviser and surrogate a year ago, but in early 2016 she was one of his toughest critics and deeply opposed his candidacy, according to a CNN KFile review of statements she made on her official Facebook page and in local Colorado radio appearances.

Ellis ... repeatedly slammed then-candidate Trump as an "idiot," who was "boorish and arrogant," and a "bully" whose words could not be trusted as factually accurate. She called comments he made about women "disgusting," and suggested he was not a "real Christian."

In one March 2016 Facebook post, Ellis said Trump's values were "not American," linking to a post that called Trump an "American fascist." She praised Mitt Romney for speaking out against Trump, referring to him as "Drumpf," -- a nickname coined by comedian John Oliver after a biographer revealed Trump's ancestor changed the family's surname from Drumpf to Trump.

"Why should we rest our highest office in America, on a man who fundamentally goes back and forth and really cannot be trusted to be consistent or accurate in anything," Ellis said in one April 2016 radio appearance.

In March 2016, Ellis attacked Trump supporters in a Facebook post for not caring that the Republican candidate was "unethical, corrupt, lying, criminal, dirtbag."

"I could spend a full-time job just responding to the ridiculously illogical, inconsistent, and blatantly stupid arguments supporting Trump," she wrote in March 2016. "But here's the thing: his supporters DON'T CARE about facts or logic. They aren't seeking truth. .. .And this is the cumulative reason why this nation is in such terrible shape: We don't have truth seekers; we have narcissists."

The article continued on to cite Ellis saying Trump was trying to destroy democracy, threatened our liberty (by seeking to limit freedom of speech via stricter libel laws), was not mature enough to handle criticism, and was not a genuine Christian because he was incapable of seeking forgiveness or repentance.

I couldn't agree more with everything Jenna Ellis said back then..

In conjunction with the K-file expose, CNN interviewed Ellis.  She said her earlier views were because she just didn't know Trump at the time and that she has found him to be a "sincere, Christian, the best president in modern history, and made and kept his promises to the American people."

Assuming that claimed re-evaluation of Trump were sincere, that would mean that Ellis aggressively and publicly defamed someone she did not even know.  It would reflect a person who is reckless and has bad judgment...certainly not a person you would want to be your attorney.

One would have to question what events in Trump's presidency persuaded Ellis that her original impression of Trump was wrong.  Indeed, Trump's four year tenure as President seems to provide a plethora of evidence (too much to get into here) reinforcing Ellis' original view of the reality show star when she opposed his nomination in 2015/2016.

Of course, the more logical explanation for her conversion is that Jenna Ellis wanted to advance her career and sucking up to the President of the United States was a way of doing that.  So, like so many other Trump critics turned sycophants, Jenna Ellis willingly set aside her morals and values, as well as her intellectual integrity, to go all in on Trump.  It appears to be working.  Ellis seems well on the way to transforming a modest legal career into a much more financially lucrative career as a "conservative legal media analyst" post-Trump.

To give herself more legal credibility, Ellis also claims to be a "law professor."  I went looking for support for that claim.  Turns out Ellis taught pre-law classes at Colorado Christian University, a small private school.  CCU does not offer a law degree.  I doubt most lawyers, or even lay people, would call someone a "law professor" if they are not teaching at a law school.

In researching CCU, I ran across the school's student handbook which governs student behavior while attending the school.  It is clear from reviewing that document that Donald Trump would have been kicked out if he had been a student where Ellis taught.  According to the Handbook, CCU:

Trump would pretty much fall short on every one of these items.  Indeed, if anyone has seen Jenna Ellis' media appearances and Twitter feed, she has not lived up to CCA's expectation regarding honesty either.
OOP's short takes:
Posted by Paul K. Ogden at 3:13 PM