You might be getting a bigger paycheck for the rest of 2020, thanks to President Trump's executive order deferring payroll taxes. Starting September 1, your employer doesn't have to withhold the 6.2% Social Security payroll tax from your paycheck if you earn $4,000 or less for a bi-weekly pay period (or less than an equivalent amount if you're paid weekly, monthly, or on some other schedule). This payroll tax break runs through the end of 2020. If your company participates in the program (it isn't required to), you can get a boost of up to $248 in each bi-weekly paycheck during
the last four months of the year. That can add up to as much as $2,232 more in your pocket for 2020.

But there's a catch – you'll be taxed twice during the first four months of 2021 to pay that money back. Although President Trump wanted a payroll tax cut for 2020, the best 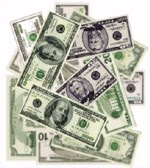 he could get without Congressional action is a payroll tax deferral. In other words, he can temporarily suspend your employer's obligation to collect (through withholding) and pay the Social Security tax, but he can't make the tax debt go away completely all by himself.

According to the IRS says, any business that defers collection and payment of Social Security payroll taxes in 2020 will have to collect the deferred taxes from their workers' paychecks ratably from January 1 to April 30, 2021. So, during the first four months of 2021, you could have 12.4% (rather than 6.2%) withheld from your paychecks to make up for taxes that weren't collected in 2020.

If President Trump is re-elected in November, he has promised to push for the elimination of the deferred taxes so that workers will not have to pay them later. That would take Congressional action, so his ability to fulfill that promise probably depends on whether Republicans can retain control of the Senate and gain a majority in the House.

It's unlikely that the Republicans will completely sweep the election and control the White House and both houses of Congress. As a result, workers should plan to pay back any payroll tax that's deferred. So, if your employer does stop withholding the Social Security payroll tax from your wages in 2020, you probably don't want to spend that money right away. Our advice is to put that money aside for now because you're probably going to have it taken out of your paycheck in 2021.

The payroll tax funds Social Security, Medicare, and other social insurance programs..  Trump had pushed Congress to stop collection of the payroll tax during the pandemic, and later said his goal was to eliminate the payroll tax altogether.  But Trump found virtually no support in Congress for either idea. Without congressional authority, he used his authority to delay collection of the tax for four months.  Companies are not obligated to participate in the program, however.