The news yesterday brought a smile to my face.

I used to religiously read the online conservative publication, RedState.  Prior to 2016, RedState enjoyed a good reputation among conservative intellectuals.  But when Trump was elected elected, RedState jettisoned its principled conservative writers to become a pro-Trump propaganda machine.  The intellectual heft of the publication declined dramatically, as the bulk of the writing fell to pro-Trumpers often using pseudonyms to cloak their real identity.  Needless to say, when RedState writers began writing anonymously, the quality and journalistic integrity of the publication fell precipitously.

Occasionally I would post comments on RedState, often expressing my disagreement with positions taken by the RedState authors.  I was never argumentative or profane.  I just pointed out facts that contradicted the author's positions...like I have done on numerous websites over the years.  Thus, I was shocked when I went to poste one day and found that I had been BANNED from posting on RedSTate.  I eventually changed my user ID, but the next time I dared to criticize a position taken by a RedState writer, I was BANNED again. 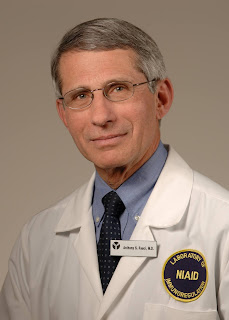 To date, the only website which has ever banned me from posting comments is RedState.

I had always suspected the person behind my banning at RedState was an anonymous RedState editor and writer with the pseudonym "streiff."  (Yes he always writes it in lower case.)  I reached out to streiff on Twitter to get clarification on what policy I had violated.  No response.  I reached out to other people at RedState...again no response.

That brings me to the news that made my day yesterday.  The Daily Beast found out who "streiff" is and outed him.  Turns out while he was attacking Dr. Fauci (pictured) and his recommendations, streiff actually was working public relations for Dr. Fauci's agency:

But that writer, who goes by the pseudonym “streiff,” isn’t just another political blogger. The Daily Beast has discovered that he actually works in the public affairs shop of the very agency that Fauci leads.

William B. Crews is, by day, a public affairs specialist for the National Institute of Allergy and Infectious Diseases. But for years he has been writing for RedState under the streiff pseudonym. And in that capacity he has been contributing to the very same disinformation campaign that his superiors at the NIAID say is a major challenge to widespread efforts to control a pandemic that has claimed roughly 200,000 U.S. lives.

Under his pseudonym, Crews has derided his own colleagues as part of a left-wing anti-Trump conspiracy and vehemently criticized the man who leads his agency, whom he described as the “attention-grubbing and media-whoring Anthony Fauci.” He has gone after other public health officials at the state and federal levels, as well—“the public health Karenwaffen,'' as he’s called them—over measures such as the closures of businesses and other public establishments and the promotion of social distancing and mask-wearing. Those policies, Crews insists, have no basis in science and are simply surreptitious efforts to usurp Americans’ rights, destroy the U.S. economy, and damage President Donald Trump’s reelection effort.

“I think we’re at the point where it is safe to say that the entire Wuhan virus scare was nothing more or less than a massive fraud perpetrated upon the American people by ‘experts’ who were determined to fundamentally change the way the country lives and is organized and governed,” Crews wrote in a June post on RedState.

“If there were justice,” he added, “we’d send and [sic] few dozen of these fascists to the gallows and gibbet their tarred bodies in chains until they fall apart.”

Upon The Daily Beast unmasking of streiff as Cruse and bringing Cruse's comments to the attention of NIAID, the agency announced that Cruse was was retiring.

FYI, above I quote only a portion of streiff's outrageous comments quoted in the Daily Beast article.  People should read the entire article to find out how outrageous his writings have been..