Four former presidents of the D.C. Bar Association have signed a letter calling on the group to investigate whether Attorney General William Barr has violated its rules. The District of Columbia Bar authorizes lawyers to practice in the city and has the power to punish them for breaking its rules and to revoke their law licenses. 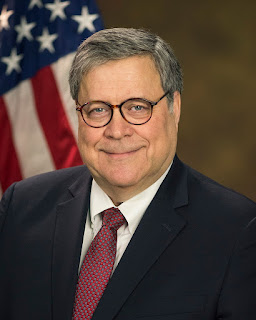 and violating his oath to uphold the Constitution, along with other charges. And it highlights four episodes in Barr’s time as attorney general to make the case: his characterization of special counsel Robert Mueller’s report on Russia’s 2016 election interference, his criticism of an inspector general report on the Russia probe, his criticism of FBI officials in a TV interview, and his role in the disbursement of peaceful protesters from Lafayette Square, outside the White House. A spokesperson for the Justice Department declined to comment.

“Mr. Barr’s client is the United States, and not the president,” the letter says. “Yet, Mr. Barr has consistently made decisions and taken action to serve the personal and political self-interests of President Donald Trump, rather than the interest of the United States.”Barr’s early description of the Mueller report and his handling of protesters in Lafayette Square have long drawn pointed criticism. But his comments on the inspector general report on the FBI’s Russia probe hasn’t drawn as much attention. In an NBC News interview after the report’s release, Barr called the FBI’s basis for opening the Russia probe “very flimsy.” The letter argues that the criticism was dishonest.

The letter also argues that Barr broke the D.C. Bar’s rules when he criticized former FBI officials’ decisions regarding the Russia probe and suggested they could be prosecuted. The letter focused on a comment Barr made in a CBS News interview: “Just because something may even stink to high heaven and ... appear [to] everyone to be bad, we still have to apply the right standard and be convinced that there’s a violation of a criminal statute.”

The letter argued the statement could unfairly influence potential criminal proceedings against those officials and that Barr should have followed the standard DOJ practice of declining to comment on ongoing investigations....

Unfortunately disciplinary investigations take a long time and Barr is likely to be long gone from the Attorney General position long before such an investigation could be concluded.  Nonetheless, an ethics investigation is certainly warranted.  In his role as Attorney General, Barr has repeatedly lied in legal proceedings and to the American people.  He has politicized the Department of Justice and trashed the rule of law.  Even though the United States and the American people are his clients, not President Trump, Barr has repeatedly used his position to advance Trump's political and personal agendas.

Trump threatened to withhold congressionally-appropriated military aid Ukraine needed to counter Russia's advances, unless Ukraine would help him politically by announcing a fake investigation of Joe Biden.  For that, Trump certainly deserved impeachment.  But as bad as Trump's behavior was, Barr's misconduct is much more extensive and knowing.    In Trump's defense, he is not a bright man and often, I truly believe, has no concept that what he is doing is wrong, or illegal.  Barr on the other hand knows what he is doing is legally and morally wrong and does it anyway.  Of all the Trump enablers out there, Attorney General William Barr is the absolute worst...and the most dangerous.  He is corrupt to the core.