American intelligence officials have concluded that a Russian military intelligence unit secretly offered bounties to Taliban-linked militants for killing coalition forces in Afghanistan — including targeting American troops — amid the peace talks to end the long-running war there, according to officials briefed on the matter.

The United States concluded months ago that the Russian unit, which has been linked to assassination attempts and other covert operations in Europe intended to destabilize the West or take revenge on turncoats, had covertly offered rewards for successful attacks last 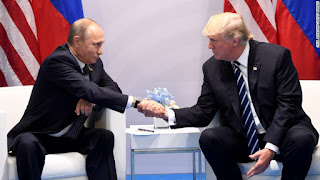 Islamist militants, or armed criminal elements closely associated with them, are believed to have collected some bounty money, the officials said. Twenty Americans were killed in combat in Afghanistan in 2019, but it was not clear which killings were under suspicion.

The intelligence finding was briefed to President Trump, and the White House’s National Security Council discussed the problem at an interagency meeting in late March, the officials said. Officials developed a menu of potential options — starting with making a diplomatic complaint to Moscow and a demand that it stop, along with an escalating series of sanctions and other possible responses, but the White House has yet to authorize any step, the officials said.

When questioned today, White House officials denied President Trump had been briefed on the intelligence.  The USA Today reports:

The White House denied Saturday that President Donald Trump and Vice President Mike Pence had been briefed on an intelligence finding that a Russian military intelligence unit secretly offered bounties to Taliban-linked militants to kill American troops and other coalition forces in Afghanistan.

“The United States receives thousands of intelligence reports a day, and they are subject to strict scrutiny,” White House press secretary Kayleigh McEnany said in a statement.

While the White House does not routinely comment on intelligence or internal deliberations, “the CIA Director, National Security Advisor, and the Chief of Staff can all confirm that neither the President nor the Vice President were briefed on the alleged Russian bounty intelligence,” McEnany said.

McEnany said her statement “does not speak to the merit of the alleged intelligence but to the inaccuracy of the New York Times story erroneously suggesting that President Trump was briefed on this matter.”

In short, the Trump administration does not deny that there is intelligence that Russia offered to pay the Taliban a bounty for killing American soldiers, it just says that information was not passed along to President Trump or Vice President Pence.

That offers only two possibilities.  The first is that President Trump was informed of the bounty and refused to act on the information while at the same time demanding that his buddy Russian President Vladimar Putin be invited to the next G7 Summit.  The second is that Trump's national security team chose not to pass along the intelligence to Trump because they did not want to upset the President by telling him what Putin had done.  The former is downright treasonous.  The second, while not treasonous, is still alarming because it means that Trump's national security team does not believe the President can handle information he does not want to hear, even when that information might be critical for making foreign policy decisions.
Posted by Paul K. Ogden at 7:52 PM

Really? Only two options? The obvious conclusion which you should have reached decades ago is that the New York Times
employs a great number of accomplished liars. At some point in your education you should have learned that they only print the news that fits. That is, fits their ideology, which is constantly to the left side of any spectrum....perhaps their worst being the covering up of the Stalinist murders in Ukraine by starvation.

The Trump administration did not deny that Russia put a bounty on the killing of American soldiers. According to the NYT, Donald Trump was informed of the bounty. I gave DJT the benefit of the doubt and didn't assume that was accurate. (Despite the fact the Trump administration lies CONSTANTLY.) Best case scenario that leaves the two choices I outlined.

Maybe it's time to accept the fact that Donald J. Trump is not a patriot and doesn't give a squat about Americans or American soldiers. He cares only about himself.

As usual Leon gets it wrong. The murders in Ukraine are by the Trump-loving Russians. It is Trumps bromance with Russia and Vladimir that has allowed Russia to get away with murder quite literally. Leon gives the traitor Trump a pass once again and once again blames a newspaper for telling the truth.

Leon, the article you linked to does not dispute that the Trump administration had intelligence that Russia was paying bounties to the Taliban for killing American soldiers. (After the New York Times reported this, several other news organizations independently confirmed this by the way, so it wasn't just the New York Times reporting it.) Instead, the White House disputes only the portion of the NYT article that Trump was personally told about the intelligence, which is a possibility I actually put into my blog article.

I am not sure why you think this acquits Trump. If it was in his daily briefing and other reports (as some reports say) which he didn't bother to read, that doesn't speak well for Trump. And if it wasn't in those written briefings, but intelligence officials did not believe they could be honest with Trump about critical intelligence Trump did not want to hear, that's really bad as well. We want our President to take in all information to make decisions, not just the information he wants to hear.

Why is it too much to ask that we have a President who is intelligent, competent and who will do the work necessary to get informed about the issues, especially those that directly impact the lives of American soldiers who put themselves in harm's way for the country? Biden may be too far to the left for my tastes, but there is no question about his competence, his intelligence, his ability and willingness to learn about issues and the fact he cares about this country. Trump, on the other hand, falls short in every one of those categories.