One of the reasons I became a Republican is that the GOP historically had a more realistic approach to deficit spending, i.e. that absent an economic downturn, the United States should not be spending more than it takes in.  Although Republicans usually fell well short of that philosophy in practice, the need to control deficit spending was at least an organizing principle of the GOP.

Guess that is no longer true.  The Wall Street Journal reports on the soaring deficits under all Republican leadership in Washington, D.C.:


WASHINGTON—The U.S. government ran its largest budget deficit in six years during the fiscal year that ended last month, an unusual development in a fast-growing economy and a sign that—so far at least—tax cuts have restrained government revenue gains. 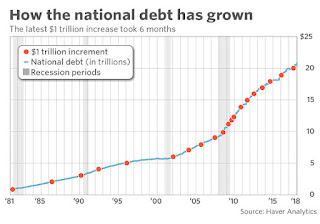 billion in fiscal 2017, the Treasury Department said Monday. The deficit is headed toward $1 trillion in the current fiscal year, the White House and Congressional Budget Office said.

Deficits usually shrink during economic booms because strong growth leads to increased tax revenue as household income, corporate profits and capital gains all rise. Meantime, spending on safety-net programs like unemployment insurance and food stamps tends to be restrained. In the last fiscal year, a different set of forces was at play as economic growth sped up.

Interest payments on the federal debt and military spendingrose rapidly, while tax revenue failed to keep pace as the Republican tax cuts for both individuals and corporations kicked in. The problem with the tax cuts passed at the end of 2017 is that the decreased revenue was not accompanied by corresponding spending cuts. Instead Congress passed a budget dramatically increasing spending across the board. Then you had the added problem that the tax cuts came during a time when the economy was already experiencing solid growth. A smart move would have been to wait until the inevitable economic downturn to cut taxes, particularly corporate taxes. Instead the tax cuts ended up pouring gasoline onto an economic inferno.

We are on track to have annual deficits in excess of $1 trillion with a growing economy.  The total national debt is currently closing in on $21.66 trillion dollars.  Interest paid to service the debt is the fourth largest item in the budget and is on the way to becoming the second largest item in a decade or so.

Did I also mention that the Chinese own much of our national debt?  What could possibly go wrong?
Posted by Paul K. Ogden at 2:29 PM