Picking Seven Winners and Losers for 2017

Presenting seven winners and losers for 2017.

1.  American Investor:  The economy went from doing well in 2016 to doing even better in 2017, with the stock market soaring.   Workers with 401Ks and other investors did incredibly well.

2.  Women:  This year ushered in a new awareness for sexual harassment in the workplace.  Women are signing up to run for office in record numbers. 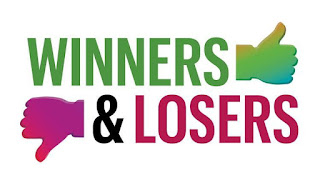 3.  Democratic Party:  Republicans began the year winning several special elections for Congressional seats, but ominously the margins were much more narrow than should have been given the ruby red nature of the districts.  In November, Democrats won a sweeping victory in Virginia that not only included the Governor and other statewide offices, but also scores of state assembly districts, a victory that has taken that body from a Republican super-majority to on the verge of a 50-50 tie.  Then came the shocker in December.  Republicans lost the special election to fill the United States Senate originally vacated by Attorney General Jeff Sessions.

4.  Corporations:  Corporations did extremely well under the GOP tax bill.  Contrary to the assumption of Democrats, not all corporate-type entities are large monoliths, overflowing in stockpiled cash.

5.  The Mainstream Media:  Despite getting lambasted by the President and his allies (or actually probably because of), TV networks like CNN and MSNBC, and news publications like the Washington Post and New York Times are enjoying better ratings and rising profits.

6.  Tom Brady & The Patriots:  Brady rallied his team to win the Super Bowl in early 2017 and the 40 year old quarterback appears poised to take his team back to the big game again in 2018.  As a Colts and Peyton Manning fan, I hate to admit their success, but it is impossible to deny.

7.  Major League Baseball: Ratings were up as a strong regular season was capped by a highly competitive and exciting post-season.  MLB is poised to gain fans as NFL declines in popularity.  That is if the baseball Gods do not blow it by continuing to do stupid things like having Playoff and World Series games run past midnight, when young and old fans of the game have long since gone to bed.

1.  Political Civility:  Name calling, "alternative facts," and lying has become accepted as part of political discourse.  It is not clear how our Republic will survive if the truth no longer matters.

2.  Steve Bannon:  He lost his job at the White House, then his candidate for U.S. Senate, Roy Moore, went down to spectacular defeat in December.   By the end of the year, President Trump was seen cozying up to Senate Major Leader Mitch McConnell, Bannon's arch-nemesis.  Bannon's expressed desire to primary "establishment" Republicans, with the support of President Trump, appears to be on shaky ground..

3.  GOP-Controlled Congress:  It wasn't before the end of the year that Republicans in Congress got around to passing a major piece of legislation.  Now entering 2018, the GOP majority in the House appears to be in great peril and the Democrats have a shot of winning the Senate, despite a map skewed heavily in favor of Republican challenges to red state Democrats.

4. American Democratic Institutions:  Institutions that Americans have taken for granted,  things like a free press, the rule of law, and an independent, non-politicized FBI, are under full scale assault by President Trump and his GOP allies in the House.

5.  Michael Flynn & Paul Manafort:  Flynn started the year as national security adviser.  He ended the year as a convicted felon. Paul Manafort was indicted for money laundering (seriously what took so long?) and other charges and faces spending the rest of life in prison if he doesn't cut a Flynn-like sweetheart deal to cooperate with the Mueller investigation.

6.  America's Youth:  We adults just added nearly $1.5 trillion to the deficit you will have to pay back during your lifetime.  You're welcome.

7.  Apple:   The I-Phone 10s are not selling and Apple was caught causing older I-Phones to slow down.  It appears the shine is wearing off the apple.
Posted by Paul K. Ogden at 12:50 PM

forgot Papa John's and the NFL ratings were down.