As of present, there are 14 states in which the presidential candidates are less than 7 points of each other, states that can plausibly be considered as competitive.  Here they are starting with the most competitive, using the Real Clear Politics polling averages: 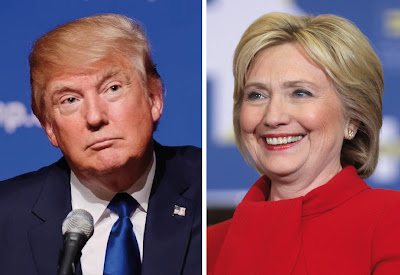 Hillary Clinton currently enjoys a narrow 1.3% lead in the Tar Heel State.  In 2012, Romney won the state by 2.04% in 2012..  This would be a huge victory for the Democrats, causing Donald Trump to try to make up ground elsewhere

Romney won Arizona in 2012 by 9.06%, but this year Democrat Clinton is polling much closer to her Republican rival, only trailing by 1.3%.   The state is being overlooked right now by the campaigns, undoubtedly because it is assumed to be leaning strongly Republican. But polls show it is tied for being the most competitive state.

Trump is doing surprisingly well in the state, leading in several recent polls.  President Obama
defeated Romney by 6.68% last year, but now Clinton leads by only 1.4%.

Colorado is another western state in which Trump is exceeding expectations.  Recent polls though show momentum in the state swinging back to Clinton. She leads by 1.8%.  Obama won the state in 2012 by 5.36% of the vote.

Florida ties with Ohio in closeness at 2.4%.  But in this state, very important for Trump's chances, Hillary Clinton leads. Obama narrowly won the Sunshine State in 2012 by .88%.

There is nearly a 2 point gap between the top 6 competitive states and those below.  Although Obama won the state by a whopping 17.69% in 2012, Democrat Clinton only leads by 4.3% in Minnesota Unlike neighboring Wisconsin, Minnesota is not yet on the candidates' radar, but perhaps it should be.

Georgia checks in as the next most competitive state, with Trump having a lead of only 4.4% in a state that went to Romney in 2012 by 7.72%.

Returning to the Midwest, Wisconsin polls as the 9th most competitive state with a margin of 5% in favor of Hillary Clinton.  Obama won the state in 2012 by a 6.94% margin.

Staying in the Midwest, Iowa ties Wisconsin as the 9th most competitive state.  Although Obama won the state by 5.81% in 2012, Trump leads in the Badger State by 5%.

Obama won New Hampshire in 2012 by 5.58%.  The Granite State is proving to be equally competitive this time around with Hillary Clinton leading by 5%.

Maine is one of two states which awards an electoral vote to the winner of each congressional district in the state.  Trump is solidly ahead in the more rural Maine CD #2  while Clinton has a large margin in the more populous Maine CD #1.  Statewide though the situation is more competitive, with Clinton leading by 5.5%.  In 2012, Obama won the state by 15.29% of the vote.    Nonetheless, there are not enough electoral votes in Maine to make it a high priority for the campaigns.

In contrast, the campaigns have put in an inordinate amount of effort to win Pennsylvania.  But polling shows Trump trailing by 6%, and, thus, actually doing worse in the Keystone State than Romney did in 2012 when the former Massachusetts Governor lost the state by 5.38%.

A state which enjoyed some initial attention for being surprisingly close, continues to poll as being marginally competitive. Trump has a lead of 6.7% in Texas.    By contrast, Romney won the Lone Star State in 2012 by 15.79%.  While Trump will likely keep Texas in the Republican column, the declining GOP fortunes in the state have to worry Republicans as they ponder the electoral college map in 2020 and beyond.

Surprisingly Not Competitive:  Virginia (13 electoral votes) and Michigan (16 electoral votes) fail to make the sub 7% cut for competitiveness.  Both states show Clinton with a 7% lead.  Obama won the states by 3.88% and 9.5% respectively in 2012.
Posted by Paul K. Ogden at 2:39 PM

Though, keep in mind, Romney and McCain were also losers. Republicans have no idea what they believe; they should go the way of the Whigs if they lose to Her.

https://pjmedia.com/election/2016/10/06/5-conservative-reasons-to-vote-for-donald-trump/ Add Dole to your list of losers but read Phyllis Schafly's 50th anniversary issue of A Choice Not an Echo to see how the scam has worked and why she supported Trump.