Rotten eggs. Sulfur. Natural gas. Near Southside residents describe the odors that permeate their neighborhood in many ways.

"This neighborhood, it just stinks," said Lisa Barnes, 52, who has lived with it for years. 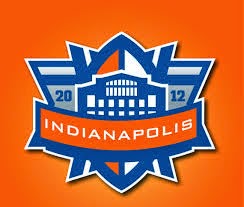 Officials at the nearby Metalworking Lubricants Co. plant have insisted that what is known as the "Southside stench" isn't caused by the dozens of smudged tanks behind their chain-link fence.

Government regulators, too, have said they don't have proof the company is the source. And even if they did, they say, they can't regulate smells.

But those regulators knew where to turn when they wanted to put an abrupt end to the smell in 2012.

With Super Bowl XLVI only a week away, an Indianapolis Star investigation recently discovered, city and state officials quietly signed an agreement to suspend operations at Metalworking Lubricants for seven days in the lead up to and during the nationally televised NFL festivities.

Some activists and residents say the Super Bowl deal raises questions about what the city and state promised the company in order to persuade it to shut down. Were favors offered, some ask, in exchange for ensuring a stink-free event at Indy's nearby Lucas Oil Stadium?

City and state officials insist no favors were extended. But to residents — who had complained about the odor for years — the Super Bowl deal stings in other ways.

"It strikes me as unfair and unfortunate that we can provide clean air and non-smelly air for visitors who come for the Super Bowl," said Southside resident Jim Simmons, "but not for our citizens who are in the path of this odor every day."

...[A]t a recent public meeting at Manual High School, neighbor after neighbor took the podium to express their frustrations with both the state and the city.

They said smells from the plant are so noxious they scare away guests, prevent them from going outside and stymie efforts to revitalize what's long been an impoverished area south of Downtown.

A "voluntary agreement" was signed Jan. 23, 2012, by Rick Powers, the city's then code enforcement chief; Tom Easterly, the top official at the Indiana Department of Environmental Management; and the company's president. None of them would speak with The Star for this story.

The agreement says that between Jan. 30 to Feb. 6, the company would conduct "no activity" at the South Senate Avenue plant's oil processing center. City and state inspectors would have access to the plant during that time, and the company would be required to "submit time-dated photographs" to verify it had shut down.

The city also agreed to suspend any enforcement actions during the shutdown, unless "an odor event ... is attributable to Metalworking and is potentially disruptive of Super Bowl-related activities."

Why have state and city officials been so reluctant to go against the company?  The state failed to issue any air quality citations against the company despite the Indiana Department of Environmental Management having received at least 30 complaints about the smell.  IDEM's defends itself saying that, although the department now has exclusive authority to regulate air quality, it has no authority to regulate "foul orders."  Although that claim is difficult to buy,  IDEM though correctly points out that the City of Indianapolis could still pursue complaints against the company pursuant to local ordinances regulating nuisances.

City Prosecutor Samantha DeWester though claims she has never been asked to pursue any nuisance violations against the company.  So let me get this straight, at least 30 complaints have been filed at the state level, but those same folks did not think of making a complaint to their local government?  Even if the 30 complaints were wrongly made to the state, why didn't IDEM officials simply refer those complainants to the City?  Then again, maybe they did.    Certainly DeWester's claim that there have been no complaints to the City about the company and the smell, just doesn't ring true.  It appears that the city officials once again are failing to operate in a transparent fashion, including not producing public documents when requested.

It also raises red flags that Rick Powers, who was then head of code enforcement, and Tom Easterly, the chief of IDEM would not speak for the story.  When public officials won't speak about what they did, it is generally because they did something that is indefensible.

As far as Southside residents complaining that they have been treated as second class citizens compared to Super Bowl visitors, welcome to Indianapolis city government. That's how we roll here.

Kudos to Star writers Ryan Sabalow and Vic Ryckaert for writing an article that demonstrates what a local newspaper should be doing.   See also a companion article to the piece discussing the contract in bit more detail and the reaction of "good government" advocates to the deal.  Unfortunately the piece doesn't link to the actual contract.
Posted by Paul K. Ogden at 12:56 PM

Paul, anyone who knows south side gal Samantha ("Sam") DeWester, the nominal Republican Center Township Chair, would similarly question assertions by DB's own Stepin Fetchit that she's received no complaints about the south side smells.

Or- to be fair- maybe this heavy cigarette smoking chick can no longer discern fresh air from foul.

Thus explaining why the "Right to Farm" amendment that denies local communities to decide where they want, and don't want agricultural operations, is dangerous.