Browning Investments’ controversial plan for a $25 million mixed-use development in Broad Ripple cleared its first hurdle Thursday, despite a strong showing from area business owners and residents opposing the project. 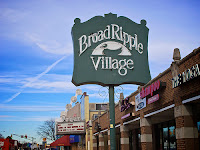 The local developer is seeking a zoning change and variances to redevelop the 2-acre property northeast of the intersection of College Avenue and the Central Canal. Browning has planned a 75-foot-tall apartment building for the site and a 33,500-square-foot grocery store, earmarked for a Whole Foods.

On Thursday, the Metropolitan Development Commission’s hearing examiner, Rex Joseph, recommended approval of the changes. The MDC will consider the issue on Sept. 4.

Upon announcing his decision, Joseph said he wasn't sure what economic impact his decision would have on the neighborhood’s small businesses, but, “as you look around Broad Ripple, you don't see a lot of change.”

Besides the retail component, Browning’s project would contain 104 apartment units and a four-story parking garage with 340 spaces.

About three dozen opponents appeared at the Thursday meeting, many of whom pleaded with Joseph to deny Browning’s requests.

Rudy Nehrling, owner of the organic Good Earth Natural Foods grocery, located just a few blocks away from Browning’s site, said he had collected more than 3,200 signatures opposing the project.

The article doesn't mention that our property taxes are being used for this project.  That should be the major objection to it.  Why should politically-connected Browning and Whole Foods be able to tap into millions of our tax dollars while others in Broad Ripple, such as Good Earth, have to compete on their own, without taxpayer assistance?

Another major problem with the development is the terrible traffic congestion in Broad Ripple, particularly at the nearby three-way intersection of Broad Ripple/College and Westfield Avenues.  With the added traffic from congestion and the removal of two traffic lanes from Broad Ripple Avenue, driving through the village now is frustrating enough to turn people off from visiting Broad Ripple.

Unfortunately, the way it works in this town is that the process will be so greased that Broad Ripple residents opposing this project have little chance of stopping it.
Posted by Paul K. Ogden at 8:34 AM

Paul, could you refer me to a detail source of information about how tax money is subsidizing this project? I keep reading the accusation, but I must have missed the proof.

Browning has said from the outset the project would not move forward without TIF money. I heard him say it at a BRVA meeting and it's been in several published reports. The figure commonly cited is $5 million Browning wants in subsidies from the TIF. I think the actual approval of the TIF expenditure comes later.

These TIFF styled intrusions on the free market drift into anti-trust issues...