Last night, I attended the IndyCAN meeting in Carmel that I wrote about on my blog.  As I sat in the parking lot playing with my phone another car pulled up.  The vehicle, a Honda, was driven by Erika Smith, the Indianapolis columnist who continues to turn out column after column (ten this year alone) advocating an enormous expansion of mass transit

When I got out of my car to retrieve something out of my trunk, I noted something peculiar about Smith's car.  It had Ohio license plates.  The frame surrounding the plate  said "BMV CLEVELAND" at the top and "DAVIS AUTOMOTIVE GROUP" at the bottom.  Of course, Smith is forever writing about how wonderful mass transit has worked out for Cleveland.

Shortly after the meeting, I went back to the parking lot to take a picture of the plate.

Erika Smith's LinkedIn profile says the columnist came to the Indianapolis Star in August 2005 after a five year stint at the Akron Beacon Journal.  Before that she was an intern at the Cleveland Plain Dealer  When she came to Indiana she was initially the Star's business and technology reporter, then later became a metro reporter.  In March of 2011, she became a "Metro Columnist" for the Star. 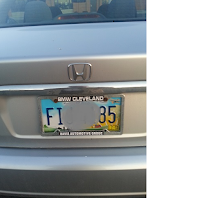 According to the BMV's website, a person moving to Indiana has 60 days to get Indiana license plates.  Erika Smith has been in Indiana for going on eight years and apparently still has Ohio plates on her car.

Why would someone continue to put Ohio plates after moving to Indiana years ago?  Because unlike Ohio license plates, Indiana plates come with a hefty auto excise tax attached to them.  The revenue from excise taxes is not dedicated and is distributed to local governments pursuant to the same formula used for property taxes.  In other words, excise tax money goes to schools, libraries, parks, public safety and to fund the very bus service that Erika Smith is pushing Indy residents to dramatically expand.
Posted by Paul K. Ogden at 12:12 PM

Bumper sticker: My other car is a tax on your income....

Stunned.
Or as we used to say on the copy desk, "good catch."
The hypocrisy of this mass-transit maneuvering has more roundabouts than Carmel. I hope Erika will write yet another transportation column, explaining her position for not rendering unto Indiana what the state is due.

Probably the more important question here is where is she registered to vote? There is a possibility that she has two homes: one in Ohio and one in Indiana. In that case you need to choose which state you're going to be "from"-- and register to vote there, pay taxes there, etc. If this is the case, then she may have gotten out of excise taxes, but she's still paying property & income taxes in Ohio, as well as in Indiana, and possibly Marion County taxes and city taxes. My husband & I own 2 homes too, one in Ohio, one in Michigan, and property around a lake in Indiana. Our attorney told us that basically you have to pick a state and be from it, lock stock and barrel when it comes to voting, homestead exemption etc. And I work for a company out of Illinois. If you don't think that's not a tax nightmare, I don't know what is. So the bottom line is: where is she registered to vote?

Just to be clear, I own two cars. One is my primary vehicle, which is a not-so-snow-friendly sports car registered here in Indiana that I drive most of the year. The car with that Ohio plate is owned by my father, although I believe my name is also on the title. I drive it only a couple months out of the year (the rest of the year, it sits in Ohio) and that is why it is registered with Ohio plates.

I do, however, have an Indiana driver's license (and plenty of parking tickets to prove it) so I am indeed paying taxes here year-round.

Thanks for blurring the plate number, though.

Thank you, Erika, for responding to these concerns so quickly.

Sure. Now that the weather is so nice, I'm actually looking forward to getting my MR2 back.

Erika,
Regardless of where you park a car, if you live in Indiana, the cars you own and drive must be titled and registered in Indiana.
Straight from the Indiana BMV website "You must title your vehicles in Indiana within 60 days of becoming an Indiana resident and will need to visit a BMV branch to complete this transaction."

As I said, the car is not solely mine. My father lives in Ohio and has the car for most of the year. That is why it is registed there. If I had the car for most of the year, as I do my sports car, then it would be indeed registered in Indiana. I had this discussion with the BMV here and my insurance company back when my family got the car. Now, if something in the law has changed, I'd be happy to adjust. (I admit I have not checked the specifics in a few years.) But as far as I know, it has not.

1734 UirnselErika, Great to know that you read this blog. One quick question.

Why do you wake up every day hating Indianapolis?

Could you just please leave and take Crotchfelt with you.It really sucks knowing that part of the $12 you guys scam out of me every month goes to pay for your car you don't plate here in Indiana..umm Im not buying the dad story,your a "columnist.You get paid to make crap up.

So by your own admission, "the rest of the year, it sits in Ohio." I guess I could understand your point if your dad actually drove it, but I doubt the BMV would allow you to avoid the tax by putting two names on the title and garaging it in another state for the majority of the year.

Paul, I ask that you appear at the Prosecutor's office and sign a criminal complaint against Erika Smith for violation of Indiana Law!

She doesn't appear to have a personal exemption for the car she owns and drives in Indiana. Furthermore, as a liberal Gannett employee, this appears to be action consistent with liberals....do as I say, not as I do. I think Gannett should assign her to Lake County, or back to nasty Cleveland.

"IC 9-18-2-45
Improperly registered vehicles; misdemeanor
Sec. 45. A person who knowingly or intentionally owns a motor vehicle that is registered outside Indiana but that is required to be registered in Indiana commits a Class B misdemeanor.

-I wonder what a 180 day sentence to our jail would do for her liberal perspective????

But you then move off ownership and talk about possession, claiming the car somehow splits time during the year, sitting at your parents house in Ohio before being used during the winter by you in Indiana.

Again, that doesn't matter. If you're driving the car here in Indiana, on Indiana roads, using Indiana services, you need to have the car registered here, have Indiana plates and pay Indiana excise tax.

When you file your Indiana taxes, you state under threat of perjury, i.e. a felony, that all cars you have are properly registered here in Indiana.

The state shouldn't be in the car licensing business, anymore than it should be in the marriage licensing business. I commend her badass scofflaw attitude to taxation, and expect to see her jump the turnstiles at the coming light rail stations. Now, if her behavior was only reflected in her writing...

ahhh, Nicholas, when you come back to reality, let us know.

IC 9-18-2-2 disagrees with your premise. Do you actually read the laws before you accuse people of breaking them? Are you actually a lawyer?

Michael: please stop with your irrelevant or ignorant comments.

9-18-2-2 states that "an exemption granted to nonresident owners under this section applies only to the extent that Indiana residents are granted exemptions in the jurisdiction that is the residence of the nonresident."

Bottom line, "IC 9-18-2-45
Improperly registered vehicles; misdemeanor
"Sec. 45. A person who knowingly or intentionally owns a motor vehicle that is registered outside Indiana but that is required to be registered in Indiana commits a Class B misdemeanor."

It is prima facie a Misdemeanor CRIME in Indiana! -180 days in jail! I believe Smith admitted all elements of the crime.....

I can sympathize with Ms. Smith on multiple counts: 1. She normally drives a sports car that cannot handle winter, so she has to have another car for winter purposes; I do the same thing; and 2. she is from Cleveland, as my family is, and thinks if Indianapolis was more like Cleveland it would be a better place, and I happen to agree. That said, her obsession with mass transit is the epitome of the advocacy that has destroyed journalism. She misrepresents the line from the Cleveland Clinic area to the edge of downtown Cleveland, which is not nor was intended to be regional mass transit like the current Indianapolis proposal is. She also fails to acknowledge the fact that Clevelanders still much, much prefer driving their own cars to public transportation, despite the fact that northeast Ohio's bus system is far superior to Indianapolis'. The Cleveland metro area is larger than Indianapolis both geographically and in population, and they still prefer driving to mass transit by exponential margins.

Erika's not committing any crimes and I'm sure pays sales taxes on gasoline when she fills up the van. The question to ask, however, is why such a supporter of mass transit (which as currently discussed in the G/A is not self-funding & would require a violation of the libertarian non-agression principle to fund via taxation) isn't riding IndyGO.

And to be clear, of course I support mass transit, as long as it's not subsidized by the taxpayer, does not employ eminent domain, raise taxes or insulates itself from civil liability.