If you want to know why the Tea Party became as strong in the Republican Party as it did, and clearly has a future in American politics, look know further than the deal Senate Republicans and, some, House Democrats agreed to in an effort to avoid the so-called "fiscal cliff."   Analysis from the Congressional Budget Office estimates that for every $10 in tax increases, there is $1 in spending cuts.  (This is a revision of the earlier CBO mate that had it at 47 to 1.) 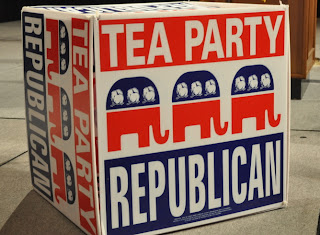 The Tea Party arose because of an unwillingness of some politicians, in particular Republican elected officials, to take seriously our deficit problems which has led to the federal government borrowing 40 cents of every $1 it spends.  Paramount to the rise of this taxpayer angst fueling the Tea Party was the belief that the problem is not that we are under taxed, but that federal spending is out of control.  This fiscal cliff deal makes a mockery of that belief

Democrats and some more "moderate" Republicans insist that the Tea Party's days are over thanks to some notable election losses in 2012.  (Of course they ignore the huge Tea Party wins in 2010 and the victories in 2011 and 2012.)  Even if that were true, the lopsided deal supported by numerous Senate Republicans, including Indiana Senators Lugar and Coats, and some House Republicans, albeit no Indiana House GOP members, is bound to re-energize the Tea Party.

I have argued in these pages that, while I believe socially conservative positions are essential to the success of the Republican Party, the Tea Party, as a movement, needs to focus on its core mission, the problem with deficit spending and holding the line on the growth of the federal government.  The fiscal cliff deal will turn out to be the best thing that has happened to the Tea Party since the 2010 election victories.  The funny thing about politics is that sometimes losing small battles lets you win bigger battles down the road.
Posted by Paul K. Ogden at 12:18 PM

As a Liberal I am not sure what you all mean about Socially Conservative Issues.

We hear a lot about cutting Entitlements. We need to take a close look at this. Surgery may be needed but, I would strongly oppose some meat axe approach.

The concern I have about the TEA Party is they seem AWOL on the issue of Local Corporate Welfare.

I have to wonder also about how many tax dollars are diverted into the pockets of Non-Profit Organizations.

Hey Flogger: Palin's focus on "crony capitalism" is nothing less than concern about "corporate welfare," which she exposed with some level of discomfort in Alaska.