The proposal is called Arts2Arts. The idea is to place public art along the Indianapolis Canal Towpath, that scenic trail that runs along the canal through midtown Indianapolis, in order to make it a "destination" for the arts. The Canal Towpath has been a popular spot for joggers, dog walkers and bike riders who live in the Broad Ripple area.

The proposal has sparked a battle pitting the Indianapolis arts community versus nature preservationists and history buffs. The latter groups want the canal protected. 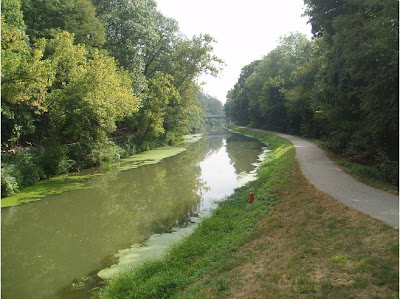 The Arts2Arts proponents have a glossy presentation on-line about the proposal. Ironically the presentation provides so many wonderful pictures of nature along the towpath as well as detailed history that it actually undercuts the concept. Reading that, I have to wonder why anyone would want to clutter the Canal Towpath with "public art."

Not surprisingly, the Broad Ripple Village Association, which supported the elimination of two lanes of traffic on Broad Ripple Avenue in favor of barley used bike lanes, supports the idea.  It is a wonder that the good people of Broad Ripple do not run BRVA out of the village since the group seems to care so little for the people who actually live and work in the Village.

Meanwhile the Arts2Arts idea has flagged opposition.  A group called Save Our Scenic Central Canal has been formed to oppose the idea and has a website up and running.  Just this month, SOSCC released a statement on the Arts2Arts idea:

Case Statement for Preserving the Canal and Towpath for Future Generations


by Save Our Scenic Central Canal
September 4, 2012


Save Our Scenic Central Canal was formed in the summer of 2012 to oppose a plan that would fundamentally alter the nature of the Indianapolis Central Canal and towpath. The plan, dubbed Art2Art, would create an “arts walk” along the towpath, nominally linking the Indianapolis Arts Center to the Indianapolis Museum of Art. The plan envisions architectural installations, sculpture, painted and digital media, interactive media, functional design elements, and new access points to adjacent property in order to “make the trail more enjoyable and more of a destination.”
Far from making the trail more enjoyable, we believe the Art2Art plan is a threat to the towpath’s preservation as a recreational trail, historic landmark, and place of scenic beauty. Henry David Thoreau said, “A man is rich in proportion to the number of things he can afford to let alone.” By sharing the following reasons for opposing Art2Art, we seek to build support for our position that the canal and towpath should be left alone so that future generations can enjoy it as it is today.
1. The natural beauty of the towpath deserves protection from development, including art installations. People visit parks, forests, trails, and yes, even urban greenspace, for its natural scenery. There are fewer and fewer such places.
2. Art along the less traveled areas is bound to attract vandals and graffiti artists, thus further spoiling the landscape. Unauthorized graffiti tagging of sculptures, monuments, and public art is a growing problem across the country.
3. Elements of the Art2Art plan would affect wildlife habitat. For example, the plan recommends the removal of some streamside vegetation in order to open up the view. Clearing of vegetation and increased traffic that would occur along the towpath would threaten the habitat of frogs, turtles and birds, including the great blue heron.
4. The canal and crushed-limestone towpath are rare historic artifacts that should be preserved to the extent possible as they appeared in 1839. The Canal Society of Indiana notes, “This stretch of canal, with the exception of bridges and streets which have been erected over and adjoining the canal, remains close to that which was originally dug in Indiana.” Placing art along the towpath would diminish its historic value.
5. There is no public demand for art along the towpath. No survey has been conducted that would suggest support for the idea. Instead a small group of “art movers and shakers” proposed the plan and are advocating for its implementation directly to Citizens Energy Group, which owns the towpath. The public needs ample opportunity to voice opinions about this project before it is foisted upon them.
6. Acts of creating places of “destination” often create unintended consequences for neighbors. As one local example, zoning variances granted for the retail corner at 49th and Pennsylvania streets boosted economic activity as intended, but led to significant overloading of parking on residential streets and increased traffic volumes and speeds. We can expect similar unintended consequences if the towpath becomes an art corridor. Not only would parking be problematic, but those who use the towpath for hiking, biking, and dog walking would face new obstacles and risks from the additional usage.
7. Recent news and editorial coverage in The Indianapolis Star spotlighted the relatively poor ranking of the Indianapolis Parks system nationally and the deterioration of park facilities and lack of maintenance. Public art requires maintenance, and, eventually, removal and restoration of the site. Public art installations would possibly become an added responsibility for the city or Citizens Energy. Fiscal resources would be better spent on maintaining the aging park facilities that we already have.
8. The canal has functioned for many generations as one of the city’s most important water sources, carrying water from the White River to the water treatment plant where it is purified for customers. It is also currently enjoyed by the community as a place for quiet repose and reflection. There is no compelling reason to diminish or eliminate that by making it “more of a destination.”
9. In the eyes of many, the canal towpath is already art and cannot be improved upon, and certainly not by the installation of “public art” over which there is no critical public review process. The siting and character of public art is almost always controversial because quality is in the eye of the beholder. It’s notable that plein air painters regularly use the unadulterated scenic canal for their work. One of their favorite locations would be altered by the addition of public art.
Instead of intrusive public art, we support the continued preservation of greenspace and the scenic and historic qualities that make the Central Canal towpath a special place in Indianapolis. We would consider supporting selected basic towpath enhancements, such as safety features and native plantings, which do not distract from the bucolic setting and provided that they would be submitted for public review.
Public art is a vital and inspirational element in any civilized society. However, undisturbed nature, especially in an age of unbridled development, is even more vital and inspirational. Indianapolis has many other locations for public art that are more appropriate than the towpath. To learn more about Save Our Scenic Central Canal, visit savecentralcanal.wordpress.com.
***
An Arts2Arts supporter offered the comment on the SOSCC blog suggesting that the group wait until after there is a formal proposal to offer opposition to Arts2Arts.  Hopefully SOSCC won't take the bait.  The way things are done in this city is that deals are cut and projects developed behind closed doors.  By the time a project like Arts2Arts is presented to the public for a "dog and pony show" it is a done deal. The wheels will have been greased and time for any real opposition will be over.

The SOSCC needs to fight this dumb proposal NOW.

Hmmm, a fight between our elitist local arts community, which always has its hand out for more of our tax dollars, versus nature buffs and history preservationists. It is not a hard figuring out which side I am going to support.
Posted by Paul K. Ogden at 11:42 AM

Good grief. Look at a Monet painting - see any manufactured "art", or do you see nature in all its glory ?

This is what happens when white liberal d-bags get together - they think they call all the shots: http://www.midtownindy.org/board

The canal looks good, as-is. And there's no such thing as "Midtown".

What's wrong with a quiet path where you are surrounded by nature? When I'm on the trail I want to see Blue Herons, turtle families sunning themselves, and listen to the birds singing.

I don't want some half-baked hodgepodge of welded metal 'art'. I can get that on the Washington St bridge over White River.

Maybe they'll move that monstrosity there that they had at the City-County Building for awhile. (It could still be there.) The one that look like a female body part, although the hole is square.

What will they stink of next?

LOL @ "What they will stink of next?"

Somebody buy that domain!

I live in the area. I want nature, and do not consent for them to put some plastic faux art facade over our natural landscape!

That is so ridiculous. I'm am literally laughing so hard as I type and think about the pompousness of it all.

They are never going to pull that off.

Paul, for yet aother time, I agree with you. There are works of art on the Monon---in Broad Ripple, not on the stretches once the Monon gets into the woods. There are works of art other places in the City of Indianapolis. There is very little green space. You also are right about the way in which deals are done in this town. Wait until a plan is finalized, and it will be final, the members of whatever board smiling as each citizen---maybe---is given two minutes to express an opinion on already was final a week before.

That's cute. You are crying fowl at an institution dedicated to art saying it will destroy nature for those that live in or near Broad Ripple..........is your house a nutural feature? The road you so joyfully slander for its dedication to improved access, is this a natural feature? The car you clearly dedicate your life to as a serious cyclist, nature? Try and think large picture before speaking. You continue to show a very short sighted view for someone so "engaged" in the law profession and local politics.

I think their point is that there is plenty of art lying around town, generally art no one asked for in places no one wanted (see, eg I-70 West). This would be yet another example. There is nothing wrong with the Broad Ripple Canal, just as there was nothing wrong with Broad Ripple Avenue until they put in the stupid bike lanes. This is another stupid idea from people and for people who have little or no concern for the local residents.