I have a lot of friends who are Libertarians.  Most of them I admire very much. They are smart and committed to principles of limited government.  We have disagreements on issues, but I admire how they try to be consistent ideologically and stand by their principles.

Probably nothing is more important to the Libertarian Party than ballot access. The Libertarians for years fought to get it and every four years fight to keep it by getting the requisite 2% in the Secretary of State's race. The alternative to automatic ballot access is a time-consuming petition process where members obtain the signatures of registered voters.  Even thought the Libertarian Party now has ballot access, there are still races which require petitions be gathered to qualify for the ballot - races like Governor and U.S. Senator. 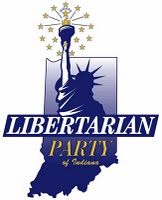 The case at hand involves Rev. Mmoja Ajabu, an interesting political activist in our Indianapolis community.  Rev. Ajabu, albeit controversial, has the same rights all of us have to throw our ring in the hat to run for Congress.  He did just that this Spring.   That was when he ran into the Marion County Board of Voter Registration, an outfit headed by a Democrat and Republican appointee, individuals selected by the two major party chairmen.  No elected official has any control over the MCBVR...it is total party control, yet the job they do is supposed to be ministerial in nature.  In Ajabu's case the MCBVR was charged with the simple responsibility of verifying names on the petitions were of registered voters

But as gubernatorial candidate Jim Wallace and presidential candidate Rick Santorum had previously learned, the MCBVR does more than its ministerial duty when it comes to voter petitions.  It is the gatekeeper for who the establishment in Marion County believes should be allowed the ballot (or, in a case brought by Attorney Greg Bowes, which candidates can have useful public voter information for their campaigns).  With regard to Wallace, his challenge to his candidacy was spearheaded by Attorney and former Marion County Republican Chairman Tom John, the very person who had appointed Susan Mowery, the Republican head of the MCBVR.  Needless to say, the MCBVR kept finding problems with the Wallace petitions, including address problems and signatures supposedly not matching. One involved a husband and wife couple who signed the petition at the same time.  One was deemed okay by the MCBVR, while the other was disallowed.  Wallace didn't make the ballot, conveniently falling just a few votes short.

Rev. Ajabu had to turn in 3,010 signatures of people from the 7th Congressional District in Indianapolis to qualify.  He first turned in 4,700 plus names.  The MCBVR went through the petition marking individuals as "NR" in a column, i.e that they were not a registered voter.  In the end, the MCBVR certified that 1,300 names were of registered voters.  Although now a minor issue, Ajabu, using the database the MCBVR told him to use, found another 130 plus individuals who should have been counted as registered, including one prominent Republican attorney who was at traffic court, the location where the Ajabu team collected signatures.

Apparently the MCBVR thought Ajabu would give up, but he didn't.  This time, armed with better knowledge of how to gather signatures specifically from 7th District voters, gathered 4,430 more names. He took them to the MCBVR.  What did they do?  They sent him a letter certifying that of the 4,430 names, not a single registered voter could be found among the 4,430 pages of names and that Ajabu's total still stood at 1,300.  The voter registration database, however,, shows there were 2,418 names of registered voters among the second batch, putting Ajabu at over 3,700 names and easily qualifying for the ballot as an independent.  A later review of the petitions at the Secretary of State's Office revealed that the second batch, as opposed to the first batch, had no notations of "NR" or any notations of any sort.  The Board had obviously never even reviewed the petitions before certifying that Ajabu had failed to qualify.

It is not difficult to speculate that Marion County Democratic Chairman Ed Treacy, fearing an independent candidate would endanger Rep. Carson's chances (to one degree or another), may have instructed his MCBVR appointee, LaDonna Freeman, to make certain Ajabu did not qualify for the ballot.  As far as the argument the Republican appointee, Susan Mowery, would act as a check on the Democrats, the fact is the two county party organizations have always worked together on ballot access and other issues.  Besides the Wallace issue, we just had a new issue where the appointee of the two chairmen to the Election Board voted, over the objections of Clerk Beth White, to hire a Democratic and Republican law firm to the tune of a quarter million dollars to defend the Board on its decision to enforce a law that was declared unconstitutional in 2003, at which time Election Board agreed not to enforce the law.  Yet none other than Ed Treacy filed the complaint against an unslated candidate that triggered the Election Board's decision to violate a federal court consent decree, a decree that it had entered into in 2003 finding the law was unconstitutional.

One would think Rev. Ajabu's dilemma would concern the Libertarian Party.  After all, that party could well face the same concerted effort by the MCBVR an the two major parties to keep the Libertarians off the ballot down the road.  Yet when the time came to stand up for principle, the Indiana Libertarian Party, led by Sam Goldstein, remaining seating.  To paraphrase a famous saying:

First they disqualified the unslated party candidate, and I didn't speak out because the candidate was not a Libertarian.

Then they disqualified the Socialist candidate, and I didn't speak out because the candidate was not a Libertarian.

Then they disqualified the Independent candidate, and I didn't speak out because the candidate was not a Libertarian.

Then they disqualified me, a Libertarian  candidate, but there was nobody left to speak out for me.

People who are considered "outsiders" need to learn to stick together, and stand for principle if they want to oppose the establishment.  The Indiana Libertarian Party had a chance to stand for principle yesterday, and the party instead chose to remain seated.

Note:  Ironically, Rev. Ajabu at the press conference made a forceful argument that Libertarians be appointed to the various boards dominated by the two parties with the hope the a Libertarian appointee would act as a watchdog.   So Rev. Ajabu was making an argument for the Libertarian Party, when the Libertarians had failed to support him in the principle he was asserting on ballot access.
Posted by Paul K. Ogden at 10:22 AM

I would bet Sam Goldstein doesn't like Ajabu and that has something to do with it.

Goldstein doesn't like people he decides are firebrands or people outside the box.

Once I was at a Washington Township School Board meeting at the request of Greg Wright and Penny Bigelow to stand up against their rubber stamp board meetings by holding up some signs in the audience. Goldstein was very angry that I was there.

I promise you that if it was a guy like Carlos May who was treated as such, The Libertarians would not hesitate a minute to get involved.

And you are right, Paul. The Libertarian Party leadership missed the boat here and should have spoke out, even if they didn't support the candidate or his platform.

I like the Libertarians, and hold great respect for a lot of them like Andy Horning and Chris Spangle. However, they do not always stand on their principles, which is why I quit the party.

If I am going to be a MEMBER of any party, they better practice what they preach.

Has an actual LP official said anything about the Aajabu case? There's a difference between no statement, possibly being unaware of it, and actively working and involving one's self in this case.

In more casual discussions, I know I've had LP members say they're in favor of lowering ballot access requirements. Maybe not necessarily changing the SOS 2% threshhold, but lowering the amounts for unrecognized 3rd parties and independents to make the ballot.

HFFT, I think Sam didn't want to support Ajabu because he didn't agree to run as a Libertarian. But Libertarians are supposed to be about principle first. Here they weren't.

IS, the Libertarians were aware of it, and initially we thought they were going to support Ajabu in the dispute, but apparently Sam Goldstein vetoed the party being involved.

Paul....thanks for speaking out on this. I hope Sam Goldstein is paying attention.

I don't think it would fall under the 1965 Votring Rights Act, but it could well fall under other civil rights provisions. And I'm not 100% sure there couldn't be federal and/or state criminal statutes violated as well.

It's a very, very serious matter to deny someone the right to be a candidate.

It is unfortunated that the Libertarians did not support liberty. However, I still support them being authorized to appoint members to the Marion County, Indiana State Election Commission, and the Secretay of State's boards. They would surely act as a counter balance to the centralized power now in the other two parties hands. We are looking for a ruling on tomorrow from the SOS. Stay tuned. The fight for liberty is front and center. Be blessed - Rev. Ajabu

Paul, Were some of his petitions summarily denied because they were photocopies instead of original signed petitions?

Joe, what "resources?" All we were asking was to mention that the Libertarian Party supported our efforts.

I have reconfirmed that Rev. Ajabu turned in originals. I looked at them in the SOS office and they certainly looked like originals. I can only suppose the Marion County Board of Voter Registration is claiming (which is a complete change in theory from the Board saying the names weren't of registered voters) that because Ajabu copied the Can 19 form to be filled out by the voters (which he did on instructions of the Election Board as the Board didn't want to give him 1000 forms), that makes them copies instead of orginals. Yeah, good luck with that one.

Nonetheless, I also reread the statutes in IC 3-8-6 (the article on third party and independent candidates gaining access to the ballot) and am writing to clarify what the law says about filing "original" petitions. It doesn't say you have to file original petitions. The only use of the word "original" in the article deals with the situation in which the candidate wants to get what he filed back from the BVR. (IC 3-8-6-10). It says the candidate is supposed to get the "original" petition back, which means in that context EXACTLY WHAT HE FILED NOT A COPY OF WHAT HE FILED It doesn't mean what he had to file an original document. The only way you interpret that way is to completely ignore the context in which the word is used.

I would point out that very, very few things in law any more require you to file an original document. For example, in most counties, including Marion County, you can record a copy of a deed if you don't have the original.