I'm probably one of the few Republicans who has nice things to say about the American Civil Liberties Union.  The ACLU fights tirelessly for Free Speech, including for those among us - the Nazis, the Klan, etc., who are the least popular.  Although to a lay person those battles seem misplaced, they are important to protecting the bedrock principles of the Free Speech Clause from erosion. 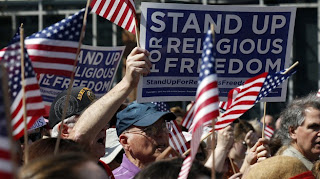 When it comes to the Constitution though, I always make the comparison between the Libertarian Party and the ACLU. Both purport to defend the Constitution. But my Libertarian friends, although they sometimes are sometimes wrong about meaning behind various constitutional provisions, or the history behind those provisions, are adamant about fighting for all of the Constitution. The ACLU though is is selective on which constitutional rights it will stand up and defend often choosing to sit on the sidelines in some of the most significant legal battles of this past century.  Further, the ACLU, under the guise of interpreting the Constitution, supports interpretations that twist or even obliterate the actual words of the grand document.  Make no mistake about it, the ACLU has a liberal political agenda, and their venue for pushing that agenda is an activist judiciary which is willing to ignore history and even the actual words of the Constitution if necessary to advance that agenda.

A recent National Review article entitled "Wherefore Art Thou ACLU" notes the absence of the organization from key cases where the Supreme Court has been called on to interpret the Constitution:


Like the Supreme Court, the ACLU is as easily judged by its sins of omission as by the  active positions it takes. Certain cases that one would assume to be within its sphere of interest are met with a deafening silence. The national ACLU ignored the internment of Japanese American citizens during the Second World War, was notably quiet during the McCarthy era, and made no mention whatsoever of D.C. v. Heller, the most important Second Amendment case that the Supreme Court took since the New Deal. And until Wednesday of last week, to its long Catalogue of Things Overlooked we could have added the HHS contraception mandate. But then the ACLU spoke up — for the government.

Yep, the ACLU had a chance to stand up for religious freedom enshrined in the Constitution against government intrusion, and instead chose to make a political argument for the federal government in its desire to mandate religious institutions provide contraception coverage even though doing so is against the tenets of those religions.  The National Review article continues:


Responding to the controversy, the ACLU’s Alicia Gay criticized the “powerful lobbying arm of the Catholic Church” for creating much ado about nothing, and then, for good measure, chastised the Church’s bishops for their perceived failure to talk about “women’s health.” Gay flatly denied that the measure violated the First Amendment, contending that “the fundamental promise of religious liberty in this country doesn’t create a right to impose those views on others, including ignoring civil rights laws or denying critical health care.” 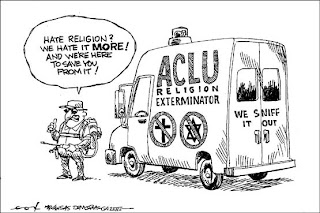 Well, let’s break this down, starting with the charge that the Church wishes to “impose . . . views on others.” Given how often the organization has dealt with the First Amendment, one might expect the text to be seared into the collective eyes of the ACLU’s rank and file, but in the absence of such fluency, a refresher: “Congress shall make no law respecting an establishment of religion, or prohibiting the free exercise thereof; or abridging the freedom of speech, or of the press; or the right of the people peaceably to assemble, and to petition the Government for a redress of grievances.”

In the case of the HHS mandate — which way does the coercion run? Are Catholic institutions forcing the government or their employees to do something — anything — or is the government impressing them into its service, and violating their “religion” and “free exercise thereof” by that act? The answer is clear: As with so much of Obamacare it is free American citizens, churches, and companies that are being bullied into a particular course of action when they were previously free to choose, and it is the federal government that is doing the imposing. For an organization with the words “Civil Liberties” at the heart of its title, this should be of great concern. Alas it does not seem to be so.

The Washington Examiner correctly characterized the ACLU’s position on the contraception mandate as being that “individuals who choose not to pay for employees’ contraceptives . . . are forcing their beliefs on their employees.” But it is downright impossible to “force” a “belief” on another adult by doing nothing. By such logic, all employers who do not offer pensions or travel expenses as part of their reimbursement packages are stealing from their employees. ...

Put simply, the federal government was never afforded the right to interfere in this sphere in the first place, and no amount of insisting that two and two make five will change that fact. Arguing for religious toleration in his Notes on the State of Virginia, Thomas Jefferson wrote that “our rulers can have authority over such natural rights only as we have submitted to them. The rights of conscience we never submitted, we could not submit. We are answerable for them to our God.” (Much as this might vex those on the left, “God” and “State” are not interchangeable terms.) Jefferson’s words formed the intellectual basis for Virginia’s Statute for Religious Freedom and, in turn, for the first amendment of the very Constitution that the ACLU claims to protect.

To see all of the National Review article, click here.
Posted by Paul K. Ogden at 10:24 AM

there's so much faulty reasoning in this post it's hard to know where to start, so i'll start here:

these employers aren't "doing nothing". they are in fact providing insurance for their employees, but are deliberately trying to choose policies that deny certain types of coverage. furthermore, whether an employee is denied coverage is based entirely on that employee's gender. not only is this "doing something", but it's doing something disciminatory. which is the whole point.

That is a ridiculous argument stAllio, employers aren't required to choose ANY health insurance AT ALL for their employees, and it matters not which plan they choose and for whatever reasons they choose it. I've worked places where insurance coverage has been cut to not include family members, to cut out other previously covered procedures. Employees are LUCKY that they get any insurance at all, no matter how little the coverage is, so your argument is irrelevant.

stAllio, you're trying to make a religious institution, most particularly the Catholic Church, fund an insurance policy that provides for coverage for something -artificial birth control - that is totally against the Church's teachings. And you don't see anything wrong with that? What's next, you going to insist the Catholic Church provide insurance policies to its employees which cover abortion?

To say the Obamacare policy is is based on gender, even if true (which it isn't as it applies to men as well), is completely irrelevant. Even religious beliefs that are deemed sexist are protected under our Constitutiion. What's next...you want to revoke the Catholic Church's tax exemption because women can't become priests? While it's a policy I favor, it's not the position of the Church and it's a religious belief that's protected.

The fact is you simply don't like what the Catholic Church stands for. That's certainly your right. The problem though is when you want to use the coercive power of government to force religions to do things that violate their beliefs. The Constitution doesn't allow that. If you don't like the Free Exercise Clause, I would suggest you try to have it repealed so government can tell religions which beliefs are acceptable. Personally that's not a world I want to live in, but it's your right to advocate for a repeal of the Free Exercise Clause.

Oh, and st.Allio, religious views can be "discriminatory" or "sexist" or just plain bad...they're still protected by our Constitution.

Whatever increases government power, the ACLU supports. Like, gun control. The ACLU doesn't give a hoot about economic freedom or the right to defend one's self.

second, i am not trying to make a religious institution do anything. as i just said, employers are free to choose not to give their employees health coverage, and would be fully in compliance with the law if they did that. furthermore, the law is set up such that (1) religious institutions are exempt, and (2) insurers, not employers, will be the ones funding the coverage.

the fact is you simply don't obama or his health care initiative. that's certainly your right. the problem though is when you use faulty reasoning and untrue premises in order to reach erroneous conclusions. logic doesn't allow that.

The acronym itself suggests constitutional tendonitis.

So St. Allio, you think it's somehow different that insurers, paid by religious institutions, providing contraception coverage somehow gets around the constitutional violation? It's the same thing. Nobody seriously believes the "compromise" works.

Rather than with the LP, it is more apt to compare the ACLU with the Institute for Justice, the libertarian organization defending speech and property rights.

Unlike the Libertarian Party, the Institute for Justice is principled and effective.