INDIANAPOLIS – Bill Levin, considered by many to be Broad Ripple’s “unofficial” mayor in the 1980s, is calling for the organizers of Occupy Broad Ripple With Guns to reconsider the rally they’re staging this weekend. Occupy Broad Ripple is asking licensed gun owners to carry their weapons to Broad Ripple on Saturday night, with the goal of raising awareness and educating people on how to protect themselves. 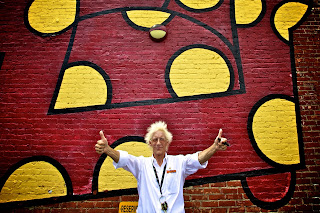 “Of course, responsible citizens with proper permits have the right to carry guns. There’s no question about that,” says Levin, a recent candidate for City-County Council. “But encouraging people to bring guns into the party-like and alcohol-infused atmosphere of Broad Ripple on a weekend night is tempting fate with firepower. And that, in my opinion, is a vast act of incredible stupidity.”

Levin acknowledges the circumstances that have led to this campaign. “It’s downright tragic that our usually peaceful community has seen such a spike in crime in recent months. But cooler heads must prevail. It’s irresponsible to mix excessive alcohol and firearms. And, although the organizers claim that this isn’t a vigilante movement, one minor scuffle could blow out of proportion and lead to gunfire, injury and death.

“As a Libertarian, I believe government must be limited to preserve our freedoms. But the fundamental purpose of government is to protect its citizens,” he continues. “So, as I ask the Occupy Broad Ripple With Guns’ organizers to cancel their rally, I also call on the City of Indianapolis and the Indianapolis-Marion County City-County Council to immediately address the issue of crime in Broad Ripple and act with speed and resolve to bring safety back to the village.

"And, as a long-time concerned citizen and community businessman,” Levin adds, “I offer my assistance to the City-County Council to help create a safe and peaceful resolution for everyone who lives in, works in and visits Broad Ripple.”

There is a straightforward idea that might better address the recent crime spree in Broad Ripple. Have the police thought of it? Perhaps. Might they have implemented it? Perhaps. Then again, there is little evidence to give the police much credence here.
It's probably been one individual. Soon, it will no longer be as the perception of "easy pickings" spreads.

The question is why didn't the counselor for that district take up this cause? Seems to me that this levin guy has a better understanding of the needs of Broad Ripple than the Counselor.

What he is saying is logical. Having a 120 people in Broad Ripple in the middle of the night running around with guns and a few thousand people drinking..its a recipe for disaster.

Someone is going to taunt these gun guys and its all over.

I never cease to be amazed at the reaction of non-gun owners. Even those that acquiesce to the fact that our Constitution guarantees us the right to self-defense, still fear guns and gun owners.
News flash folks, there are already armed citizens in Broadripple, and every other area of the country, and we don't see shooting anywhere, except places where guns are not allowed.
The idea that a rally of responsible gun owners, in some way leads to random violence, is simply absurd, and can't be substantiated by any known fact.
I respect Bills' concern, but in this case, he's simply wrong.

And I would point out that my publishing the press release doesn't mean I agree with it. I'm not 100% sure it's the right PR move, but licensed gun owners carrying their guns have never concerned me the least for my safety. In fact, I strongly believe there is a deterrent effect to criminals who think citizens might be armed.

...but isn't council president, Ryan Vaughn the councilor for the Broad Ripple area?????

I totally agree, StillWind. Citizens with CCW permits are all around, every where, every day. We don't see shootouts in the street and we don't see punks and thugs getting blown away because they taunted someone. That's because the "vast" part applies to responsible gun owners. Maybe instead of a rally, they should just hand out buttons saying "Gun owner" to everyone. Then the criminals can be reminded that they're playing roulette with their lives every time they decide to rob someone.

"Cooler heads" won't bring down violent crime. This rally will, as only a foolish thug would walk into a militia meeting with the intent to do harm.

What ultimately works in reducing violent crime are demographic changes, several criminals being killed by their victims or tyrannical curfews where none are allowed out-of-doors.

As the criminal element has easy access to Broad Ripple with its abundance of waiting victims, no demographic change will help it. IMPD makes too much money from providing private security to Broad Ripple bars (while never seeming to spot any crime on the street), so we won't see curfews.

A universally armed society and a laissez-faire Prosecutor is the surest way for this country to cure its violent crime problem.

If you want a deterrent effect, I would encourage the rally to carry handguns openly holstered or to carry long arms shouldered. In crowds, a shotgun is preferable to a rifle. I would also encourage the OBR members to have less-lethal rounds in their shotguns.

Unknown or sketchy faces should be met with "how are you doing, tonight?" That's a basic police tactic, long forgotten. OBR members should walk in pairs. Women, particularly, could be approached and offered tips on safety. "Do you have a minute to talk about your safety?"

If anyone objects, it's an easy matter to say "You're a very pretty lady. We're doing our part to see you go home safe and sound."

For women who don't want a gun, I recommend whistles and pepper spray.

By the way, the police are going to flat-out hate the recognition by the public that the cops are self-serving and ineffective. When the public challenges the cops for market share, the cops have the ability to drive their competitors from the marketplace.

dating is an experience. not a plan. said...

Bill Levin is a bleeding heart liberal with no balls! The reason this country is going to crap is because of these politicians that cater to the criminals and take the rights away from the law abiding citizens. Broad Ripple is PACKED with guns every weekend. The only difference this Saturday will be that the guns won't be concealed. They will be visibly holstered...
"cooler heads" don't prevail. As a former correctional officer, It was my job to keep a cool head at all times. That's why the prison system is a failure. The offenders do whatever they want and the officers can't do anything about it because of the policies that these political douchebags put into place that restrict officers from doing their job. I SUPPORT THE 2nd AMENDMENT RIGHT TO PROTECT MYSELF.

I live in Broad Ripple. I'm armed any time I'm out of the house. My roommate is armed any time she's awake. We're peaceable people -- and we aim to keep things peaceful.

Gun owners vary but let's see how this plays out. The organizer is not looking so good but he is just one guy and the "organizing" is what, a Facebook page and a loose call to show up?

A simple OC event is unlikely to be a problem. Seriously, "Someone is going to taunt these gun guys and its all over," you think so? What, 'cos hard time over some nitwit "taunting" is a lark? (And who wants to taunt an armed citizen?) Taunt me ("Na na na na-na, stooopid gurrl with a gu-un."), and I'm just gonna smile or say "have a nice day" and move on.

Business owners have the right to tell an open-carrier to leave and if they won't, that's a matter for the police. It's a misdemeanor but Officer Friendly wouldn't be amused -- and nobody wants that, he's got too many ways to ruin ones evening