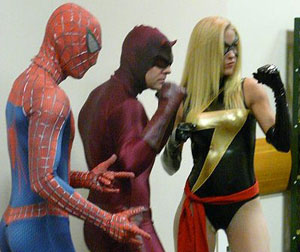 I have to admit that the Gen Con Convention is one of those things I simply don't get and have never gotten: Here's how the event is described by organizers:


Gen Con Indy is the original, longest running, best attended, gaming convention in the world. For over 41 years, Gen Con Indy has been setting the trend and breaking records. Last year, more than 100,698 turnstile and 30,000 unique attendees experienced Gen Con Indy. The biggest complaint we hear is that there is simply too much to do, see, and experience. Get lost in a phantasm of art exhibits. Stare at jaw-dropping costumes, or better yet, wear one of your own. Meet the movers and the shakers in the gaming industry. Check out the newest games and get a sneak peek at the latest editions.

I don't get the whole interactive gaming experience, role playing board games. or the attraction of dressing up in costumes or looking at others dressed in costumes.  But then again, I've never been a fan of science fiction.  My fondness for science fiction ends with the original Star Trek TV series and the original Star Wars movie.   I once accompanied my brother and nephew to the theatre to watch the Star Wars clone "prequel."  I kept making excuses to go to the lobby to escape the painfully boring experience.

I do know though that this convention brings a lot of cash to our city and has far more of a financial impact on the City than the professional sports teams we so heavily subsidize. With regard to the Colts and Pacers, most of the visitors are from the metro area.  The money spent downtown is discretionary spending being moved from various parts of the metro area to downtown.  There is no net gain.  But with regard to the Gen Con attendees, we are talking about money brought from all over the country to our fair city.  For that reason,  the Gen Con nerds are kings of the city this weekend.
Posted by Paul K. Ogden at 11:22 AM

And I'll bet nobody gets shot on the street either.

I could see some fights between people with light sabers.

I would bet this Gen Con brings in more cash for the city then all of the home games the Colt's play this season. To think the taxpayers are not even paying them to play games! What a concept!

I bet you're right, Guy.