On several of the Democratic blogs I'm seeing people express anger at Evan Bayh over his decision to forgo a third term, leaving the seat open that was won by former Senator Dan Coats 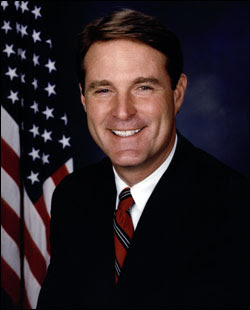 last night. The theory is that if Bayh had stayed on he would have cruised to victory and Brad Ellsworth then could have simply been re-elected from his 8th Congressional district in Southwest Indiana.

While I think Bayh and the Democratic leadership made a mistake, that wasn't it.

I haven't seen the numbers yet, but my guess is Coats beat Ellsworth in the 8th Congressional District. Ellsworth was popular, but I'm not sure he would have survived the Republican tidal wave.

So too, I'm not buying the simple assumption that Evan Bayh would have overcome the huge statewide Republican vote to capture re-election. Tuesday night reminded me so much of the Republican tidal wave that hit in 1980. In that year, Senator Birch Bayh was expected to easily be re-elected and was way well ahead in the polls over his little known Republican challenger first term Congressman Dan Quayle. On Election Night 1980, Quayle shocked everyone knocking out Senator Birch Bayh who was looking for his third term.

So I'm not buying the conventional wisdom that Evan Bayh would have turned around all those Republican votes cast on Tuesday for GOP candidates. He could have well been a victim of a political upset like his father was.

It's possible that Evan Bayh saw the Republican tidal wave coming and got out to avoid the same hit his father took at the polls. I never for a second bought the holier-than-thou reason cited by Bayh for his decision, a claimed epiphany about Washington politics that apparently only came to him about 11 1/2 years into his service in D.C. 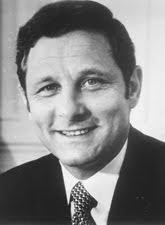 One thing I think Democrats should be mad about Bayh though is the lateness of his announcement, a sbuject the media has continually given the Senator a pass on. I think most certainly it was a deliberately timed decisions to avoid a primary and let party insiders pick the candidate rather than the Democratic electorate. Democratic voters, who had their right to pick their nominee, should have been furious about Democratic insiders taking that away from them.

What really hurt Ellsworth is the fact that the electorate outside of his congressional district didn't know him. He would have been aided by a primary in which for weeks if not months the free media attention was on him and his efforts to tackle the nomination. The "contested primaries are always bad" philosophy of party leaders is simply wrong. Sen. Dan Coats had a highly contested primary and easily won the general election over Ellsworth who had no primary opponent. The first Democratic presidential candidate to win Indiana since 1964, ran a contested primary in the state. Not only that, that candidate, Prsident Barack Obama, actually lost the primary here. People forget that.

Primaries produce stronger general election candidates and aid in name ID. As far as those negative attacks in primaries, well the electorate has a notoriously short attention span and tire of issues after awhile. Often airing dirty laundry in a primary, makes that dirty laundry less effective in the general election. With Coats, by the time the general election rolled around, the issue of Coats being a Washington lobbyist and a carpetbagger who had just returned to Indiana to run, was old news. Voters had moved on.

Of course in the end it didn't matter. Ellsworth simply wasn't going to in a Republican-leaning state, win a state wide race in a year when a national Republican tidal wave came to Hoosierland. So much of success in politics is knowing when to run and when not to run. Maybe, just maybe, Evan Bayh knew what he was doing after all and, like a heavyweight boxer, avoided stepping into the ring and facing the same upset in a massive Republican year that his father experienced in 1980.

Note: Pictured is Senator Evan Bayh and a picture of his father, Birch Bayh, while he was serving as Senator.
Posted by Paul K. Ogden at 5:50 AM

Michael Piper is reporting that there are indications that there are powerful and wealthy that are considering backing Evan Bayh for president, as a third party centrist candidate. As disturbing as are these times, they are interesting, eh.