Probably my favorite professor in law school was Henry Karlson. At some point, Prof. Karlson acquired the nickname "Hammerin' Hank." To detractors, it was a nickname 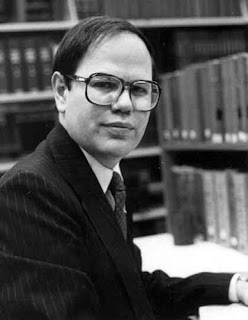 that was meant to be derogatory. But to those of us who knew him and appreciated his intellectual, confrontational nature, the nickname was a high compliment indeed.

Hammerin' Hank's area of expertise was criminal and constitutional law. But Prof. Karlson also had an extraordinary intellect when it came to other areas of the law. He had a gift for dissecting cases and making you think of legal positions you had never before considered before. Those intellectual challenges helped polish many a student for a future in the law.

I never had the pleasure of having Prof. Karlson for a law school class. I always ended up in the "other" criminal law or procedure class. Instead where I got to know Prof. Karlson was in the "gray lounge."

In the old law school, there was a lounge area in the middle of the classrooms. We students, being clever sorts, called it the "gray lounge" because all the chairs in the lounge were, well, gray. In later years, the school bought non-gray furniture and renamed it the "Dailey Lounge." Not sure if the name stuck.

We students hung out in the gray lounge, often talking about law and politics. All the professors ignored the students, heading directly to their offices after class, shunning any interaction with the students. Professor Karlson was the lone exception, sitting with students in the lounge debating the politics and legal cases of the day. Fiercely opinionated, a conservative in a bastion of liberalism, Professor Karlson debated issues with conservative and liberal students alike, challenging those students to consider other ways of looking at the issues. For many law students, who had for years gotten by simply regurgitating the liberal views of their professors, suddenly being challenged by a politically conservative intellectual threw them for a loop. Prof. Karlson "hammered" opened more than a few liberal minds at the IU-Indianapolis law school.

Probably the best compliment I ever heard paid about Prof. Karlson came from a most unlikely source. A friend of mine, now an attorney in the city, was one of the most liberal students in my class. Constantly spouting socialist nonsense and advocating limitless judicial power, he and Prof. Karlson often could be found at loggerheads in the gray lounge, embroiled in some legal or policy debate.

I graduated convinced my friend disliked Prof. Karlson for his right wing views. Then the other day, I ran into him. While reliving our old law school days, he began talking about how much he enjoyed those debates and respected Prof. Karlson. He said it meant so much to him that Prof. Karlson would take time out of his day to sit down and talk to the students outside of class. Prof. Karlson's willingness to do that enriched a lot of law students' lives, making them not only better future lawyers, but better people. Rest in peace, Prof. Karlson. We will miss you.
Posted by Paul K. Ogden at 6:00 PM

My thoughts and prayers go out to Liz and her family. While I only met Mr. Karlson once all I have heard about him speaks to his intelligence and determination.
Carlos May

My heart goes out to Liz too.