While a life-long baseball fan, I've never been a fan of the All-Star game which just took place a day or so ago. There is something phony about a "game" in which players are constantly shuttled in and out of the lineup. It's not a true test of which league has better players.

But the All-Star break, which ends today with the start of the second half of the 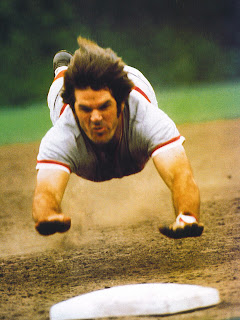 season, is a chance to reflect on the national pastime, baseball, the game of my youth. Growing up in Southeast Indiana, I was a fan of the Big Red Machine. While everyone else was a fan of the more popular and flashy Pete Rose, Johnny Bench, or Joe Morgan, I was a fan of the quiet slugger, first baseman Tony Perez. All are in the Baseball Hall of Fame. Well, actually Rose isn't but should be. Rose's sins were committed as a manager not as a player. And man what a player Pete Rose was. The all-time hits leader epitomized what baseball is all about.

The game has changed so much from when I was a kid. A few years back, I spent hours combing over the 1975 and 2006 New York Yankee rosters to see whether I was right about my memory that players growing up were much smaller than players in 2006, near the end of the steroid era. Boy was I right. I'm working off memory here as I can't find the research, but the players on the 2006 roster are about 32 pounds heavier and nearly 2 inches taller than the Yankees of 1975.

Baseball is a beautiful sport. Unfortunately the professional game has lost a lot of appeal it had in my youth. These are my recommendations for turning around the game:


Those are some thoughts. I would be happy to listen to others.

See also: Wednesday, October 28, 2009, There is No Cold in Baseball; Major League Baseball Turns Its Back on Youthful Fans

I can't agree with you more, especially how slow the game has become. The Kabuki theater of pitchers stretching and batters stepping out of the box just to adjust there shirt or helmet or bling has become insufferable.

That is why I'm a big fan of AAA baseball. I attended an Indians game last summer and it took me back to the way baseball used to be play.

In other words, the players really putting an effort into the game.