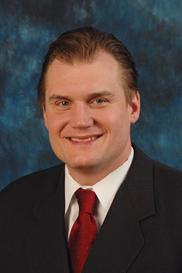 Marion County GOP Chairman Tom John has outdone himself.
During John's tenure, he and his Hamilton County sidekick, David Brooks, have turned the once vaunted Marion County Republican machine into an operation where virtually every decision is made behind closed doors by John and Brooks who then attempt to shove their decisions down the throats of Republican workers. While this is not unusual in Marion County Republican Politics, Tom John has taken the elitist, back room approach to a new level. Tom John, David Brooks, et al. apparently believe they have been ordained by God to pick the Republican nominees in Marion County and are furious when someone doesn't go along with their program. Brooks went so far as to make a silly Hatch Act claim to try to get Marion County Sheriff candidate Bart McAtee removed from the ballot.
Now Tom John has taken his hypocrisy to new levels. In a mailer with the tag line "Tired of Back Room Deals and Politics as Usual," Tom John, through the auspices of the Marion County Republican Central Committee (it's nice to see Tom John waste Republican funds attacking another Republican), accuses McAtee of cutting a "back room political deal" with Frank Anderson. For the record, I have zero regard for Frank Anderson. At best, he's been asleep at the wheel for 7 1/2 years and has repeatedly failed to do his job. He's also profited handsomely off the inmates and their families and he should be deeply ashamed of the way he's exploited them. Sheriff Further Anderson has spent over $4 million in commissary money on his private law firm (and political contributor) in clear violation of Indiana law. Talk about someone who has trouble following the law.
Having said that, Tom John should be the last person in the county to accuse someone of a "back room deal." That's Tom John's stock in trade. It's because John insists all decisions be made at the top of the county organization and believes the GOP precinct and ward workers exist merely to carry out his edicts, that John has not done what is necessary to reinvigorate the Republican grass roots by restoring the power of the GOP party worker.
Hopefully this hypocritical mailer will mark the beginning of the end for Tom John's chairmanship. That he is willing to use Republican funds to slander another Republican in a primary battle, all because his is angry his slated choice is being challenged, is emblematic of the need to kick Tom John and his Hamilton County sidekick to the curb.
Posted by Paul K. Ogden at 9:43 PM

Paul, It's unfortunate that you've not taken the opportunity to try to get to know Dennis Fishburn. I know you despise the people supporting him, but I think he's a decent guy. It's time to put an end to the McAtee cronyism in this county. I can't stand people that are all in it for their families, and that's my impression of the McAtees. Sorry you are so misguided on this race.

Please tell us what qualifications that Fishburn has to be Sheriff? He has ZERO budget experience,ZERO management experience and is not held in high regard by his fellow officers.

While the McAtee campaign may be above board and not take negative shots, I'm not.

Dennis Fishburn is a pawn in Tom John's game. Fishburn was choosen for 2 reasons. 1 is that he gets name recognition because of his son. Clearly Daddy isn't afraid to profit off of his son's misfortune. 2 Fishburn is before McAtee alphebetically.

I find it interesting that neopotism is being brought up by a candidate who is only in it because of his son. At least McAtee can stand on his own career and doesnt need to rely on the pity vote.

AI raises some good points about the need for new blood and not having one family control an office. But then again Larry has good points too. I have no reason to believe Fishburn is not an honorable guy, but right now he's a tool being used by Tom John and David Brooks. They don't care squat about winning in November. They're trying to beat McAtee and cover their own butts.

This paragraph of Larry's sums it up:

"Dennis Fishburn is a pawn in Tom John's game. Fishburn was choosen for 2 reasons. 1 is that he gets name recognition because of his son. Clearly Daddy isn't afraid to profit off of his son's misfortune. 2 Fishburn is before McAtee alphebetically."

I don't think we have any truly great candidates for Sheriff.

Paul and Gary? Who are you planning to vote for on Tuesday? Do you mind sharing?

The items cited by Larry as reasons why Fishburn would not be a good Sheriff unfortunatly McAtee does not have much experience with either.

As much as we do not like the leadership of the County Republicans at this moment, Fishburn is not a bad candidate. After having a great discussion with him several weeks ago, I have a feeling that things will not go the way that people are predicting as far as Fishburn being a puppet. I could be wrong, but after chating with him feel that he will be a big surprise.

I do know that McAtee is not a Republican, he is only what is self-serviing at the moment. If that were not true, he would have never supported Anderson and his bunch of misfits.

Melyssa is correct in the fact that neither of the major parties brought into the fold a "Super Candidate" for the people of Marion County to vote on. I for one would have liked to have seen the Libertarians put up a candidate, or even an Independent.

I think the best candidates for this office are the two outsiders, only because something has to be done to change where the Sheriff's Department is heading.

Well once again the fishburn camp wants to tell you why not to vote for McAtee rather than why TO vote for Fishburn. That should pretty much tell you who has a weak candidate and feels threatened. its the primary reason I'm supporting McAtee.

For the facts about experience why dont you visit the respective campaign websites to see who has the experience and who doesn't.

I once again welcome someone to tell me why to vote for Fishburn other than he's not McAtee. Hear that? its crickets...

As to the tired old claims that McAtee is not a Republican. Is that the best you can do? Some trumped up charge that because his dad supported Frank Anderson the son is not a Republican? I mean regardless of the fact that Schneider was under a federal investigation you should always support the party right? I mean thats the attitude of the Chairman even if it means corrupt politicians hold office. Heaven forbid McAtee's FATHER supported someone who he believed to be the lesser of two evils.

I guess I could start the whole Fishburn isn't really a mormon because of many of his actions but hey, even I wont stoop to the level of the Fishburn camp.

Now,
For the love of god will someone from the fishburn camp tell me why I should vote for him? I'm serious. You couldn't even come up with generic fluff to put on your website and are in fact running on the "I'm not McAtee" campaign tactic. Is your candidate really that weak that you have no hope of winning on your own stregths? What are you going to use for your tactic in the general election should you win the primary? Your son can only take you so far you know...

As a side note doesn't anyone have a shipping address for Tom John. I have a big old box of chapstick Im going to send to him when McAtee wins.

AA, it's simple: the slate is always wrong. Until Tom John stops this slating nonsense and its implicit corruption and coercion, his candidates must be presumed untrustworthy.

Isn't the MCRCC almost broke? More importantly, what about the other races and candidates!? What about the General election!? Did the MCRCC even seek advice from the people who donated or, most of all, other slated candidates?

are you including tomorrow's character assasination mailer that Tom Joh/Dennis Fishburn are putting out in your count of 3 x 10K?

Didn't Carl Brizzi transfer his campaign account to this cause? The campaign funded in part withut $200,000 that belongs to people in Millersburg, Ohio?

I do not understand why Carl Brizzi didn't quarantine that money for the Fair Finance bankruptcy trustee. Can one of you fancy lawyers explain this?

Obviously Buffy and Tom did not have one of these:

Tom John and Ed Treacy are equally salacious and vindictive toward strong people who dare run against their choices/slate, for whom all the party workers are expected to push, or face disgrace, or worse. Wednesday will not come soon enough.

Larry it's enforcement, not inforcement...

Your numbers are off. Tom John spent over $86,000 on those mailers.

Where did all of the money come from.Fishburn had none....


I am thinking that it came from Tom John himself.He had no choice.

If McAtee wins, Tom John will be selling Hot Dogs on the circle.

Do you hear that? its still crickets..

Congratulations to Terry Curry! It's time for a change in guard at the most important criminal gate keeper position in central Indiana.

It is critical, however, not to only change the guard but to also hold accountable the current and former guard (Brizzi) for his full transgressions. Carl Brizzi's personal brokerage and bank records for the period 2004-present should be made public. He should be forced to account for exactly how many shares of Cellstar and Red Rock Pictures he purchased and/or accumulated and where his source of funds came from. He did not just "guess" to buy a massive quantity of Cellstar right before Indpls-based Brightpoint, run by the brother of Tim Durham's convicted felon partner Dan Laikin, bought out Cellstar. He did not guess to accumulate what appears to be almost or about a million shares of a worthless boiler room, Red Rock Pictures, shortly before Dan Laikin was arrested for illegal manipulation of that same stock, Red Rock and National Lampoon.

And, I don't believe he just "guessed" to go run up to Elkhart and "find" a building for a newly formed partnership with Paul Page, just in time to magically ink, with the State of Indiana Child Care Services Department, a multi-year, above-market (reportedly) triple net lease of $245,000 a year on a cost basis of $825,000, with no money down! Why, it's Magic Brizzi!

Unfortunately, in fairness to Brizzi, no one has criminally charged him--yet. So, if you are reading this and are, for example, someone who is familiar with his tax returns for the last five years please forward those to this specific person: