A Primer on Primaries 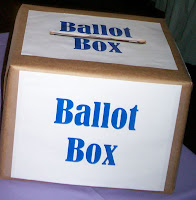 As I am no longer an appointed Pike Township Precinct Committeemen (apparently Marion County Republican Chairman Tom John pulled my appointment sometime before the county convention at which he was re-elected last year), I didn't have a vote at the GOP slating convention this Saturday. However, I had a chance to read up on the coverage of slating by the various blogs as well as the Indianapolis Star and now offer some observations.

Marion County Is A Democratic County - I have read a few people declare that Marion County doesn't really have a Democratic majority. Poppycock. Of course the Democrats have a majority in the county, and a significant one at that. The baseline partisan vote in an area is measured by looking at low-profile races, which are the races in which voters generally don't know the candidates and vote their party. In 2008, the baseline was 60-40 Democrat. That baseline was undoubtedly inflated somewhat because of the Obama turnout. In 2006, the county baseline was 53-47 Democrat and in 2004, it favored the Democrats 52-48. My guess is the baseline for the next election will be about 55-45, though a nationwide Republican tide could shave a couple points off that number.

Republicans can still overcome the Democratic baseline and win certain high profile races. The Republicans now have a shot at winning the Prosecutor's office with Mark Massa and an outside shot of winning the Sheriff's race, particularly if Bart McAtee wins the primary. But races like Recorder, Clerk, etc. are going to be virtually impossible to win unless there is a huge Republican tide. Those are almost always straight baseline races.

Slating is Almost Always About Party Leaders Picking Candidates Not Party Workers - People who are involved in Indianapolis politics are shocked to learn that slating is practiced virtually nowhere else in the United States. In theory, slating invigorates the grass roots and rewards party workers by giving them a say in the selection of candidates. In practice, the process inevitably becomes corrupted by party leaders filling vacancies with "mummy dummies" whose only "work" in the party is voting the way the leaders want at slating. Slating results in the nomination of a lot of candidates would aren't strong leaders and are afraid to stand up for the people's best interests over the interests of party leaders.

Primaries As a Negative for Political Parties is Greatly Exaggerated - I hear all the time that the worst thing that can happen is for a party to have a contested primary. Nonsense. Tell me how the Obama-Clinton primary/caucus battles inflicted damage on eventual winner Obama. It didn't. The battles in fact energized the grass roots of the Democratic Party, greatly increased registration and gave Obama much-needed campaign experience. Some primaries are bad, true, but many are not.

Mark Massa - He has to distance himself as far as possible from Brizzi. Eventually the Democrats will figure out that tying Massa to the scandal-prone Marion County Prosecutor Brizzi is far better strategy than tying him to the popular Governor Mitch Daniels. Party leaders should be putting pressure on Brizzi to resign so Massa can run in 2010 as the incumbent.

Terry Curry-Greg Bowes - This battle for prosecutor could be a lot closer than what people are thinking. Bowes has county-wide name recognition which is worth a lot of money. He is going to get media coverage. If he runs as a maverick candidate, an outsider who will aggressively target white collar crime and political corruption, regardless of party, he could score among mainstream populist Democrats eager for someone to oppose the Old Guard Democratic Establishment. Like the Republicans, the Democrats have a signficant populist element in their party that is fed up with establishment politics.

Dennis Fishburn-Bart McAtee - I have yet to decide who I will support in this primary contest for Sheriff, assuming it unfolds. While the McAtees have always been supportive of me, I find their affiliation with ethically-challenged, asleep-at-the-wheel Marion County Sheriff Frank Anderson to be more than a little troubling. Still I think the McAtee name still has political power and Fishburn's lack of political experience is troubling. Fishburn is going to get his first lesson in Marion County GOP politics when he finds out that, although the organization leadership helped him get slated, that's pretty much where the help is going to end. Any resources the county organization has is going to go to help Massa in his race. I would not bet against McAtee winning the primary.

Dan Coats Nominated in the U.S. Senate Republican Primary? - This would be a huge mistake. 2010 will be a good year for Republicans. The GOP will have an excellent shot at beating Evan Bayh. And you nominate a Washington lobbyist who doesn't live in Indiana? This is an example of how the importance of money can be overstated. Yes, Coats can raise money, but he has negatives that will doom his campaign with Hoosier voters, regardless of how much money he raises. The Republican Party is much better off nominating someone like former Congressman John Hostetler. If the conditions are right, which I expect they will be, any credible Republican candidate will be within striking distance of Bayh in the polls and the money will come in because of that fact.

Just my thoughts on this Sunday night.
Posted by Paul K. Ogden at 8:22 PM

As someone who's been very hesitant to align myself with one political party, I would put in as much time and money as I possibly could if John Hostettler managed to get the nomination. I can't believe he's having trouble getting signatures while someone like Coats almost coasts in and makes a power grab.

So, are you running for PC or just letting it go? If you weren't running for school board, you could sleep past 4 am on the 4th. That's got a lot going for it, to be sure.

I agree on slating and I often use the Clinton/Obama primaries as an example, too. What toasts me even more is that those who want to keep slating for its influence peddling properties, are the first to complain about low voter turnout at the primaries. No choice, no votes. It seems simple to me. I ended up skipping slating myself this year - they've pretty much drained any contests from slating, too. And, how many blinking LED donkey pins can one gal use, anyway?

I'll run for PC next time it's up again. I think the Ds must have their positions up this time but the Rs don't.

I am confused. I am failing to comprehend the replacement policy because I thought the precinct committeeman is an elected position and if it a vacated, then there is an appointment. I don't see how you could be replaced if you did not resign. I guess I need some clarification on the law.