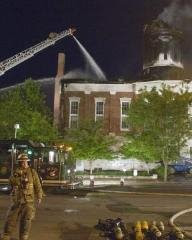 News out of my home town of Madison is that the county courthouse, a structure built, in 1855, has been severely damaged by a fire. The roof collapsed into the third floor substantially damaging the courtrooms that were located on that floor.
.
While I lived out in the country near a "town" of China, Indiana which had a population of about 17, I always considered Madison, a historic river city of about 12,000 about 6 miles away, as my home. I had my first job working at my great uncle's store, Hunger's Feed Market, where we sold supplies for farmers, just down the street from the Jefferson County Courthouse.
.
Later, I went on to college and then law school. Ironically my job at the Attorney General's Office, trying eminent domain cases, led me back to Madison. My first jury trial took place in one of those courtrooms affected by the collapsed roof.
.
In my various jobs over the years, I've had a chance to visit nearly every courthouse in the State of Indiana. I would be lying if I said Madison had one of the best looking courthouses in the State. I love old buildings as much as anyone, but the building lacked functionality, was cramped, and, with the exception of the dome, was unattractive. Ironically the fire might actually help the community make much needed improvements to the building, improvements that were never seriously considered given the desire to preserve the historic structure.
Posted by Paul K. Ogden at 8:26 AM

Mr. Ogden: I guess beauty is in the eye of the beholder, but I must take exception to your comment about the Jefferson County Courthouse being rather unattrative aside from the dome. It is a classic Greek Revival building listed on the National Historic Register. The day of the fire it had never been lovlier; and I think maybe you have been away from home too long!

Also, the day before the fire I bought three quarts of fresh strawberries at the Farmer's Market outside the Courthouse. They were excellent, and I think they were grown in the China area.

Please make a trip south when we have completed our rebuild.