There are few governors more ridiculous than Florida's Ron DeSantis. Rather than embrace thoughtful policies that would help the lives of Floridians, DeSantis looks for issues that can garner media attention and boost his popularity among the MAGA folks who dominate GOP politics in the Sunshine State.  The Governor doesn't care if it means trampling conservative principles or wasting taxpayer money.

The Florida legislature appropriated $12 million to relocate "unauthorized aliens...from this state."  But DeSantis had a problem. Florida doesn't have a border at which the "unauthorized aliens" are crossing.  So he didn't have anyone to relocate.  So what does DeSantis do?  He uses Florida taxpayer money to go to Texas to ship them out from that state to places like Martha's Vineyard, New York City and Washington, DC. 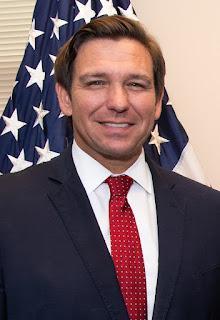 Never mind the literal language of the Florida statute doesn't allow DeSantis to do this.  MAGA Republicans aren't real big on following "laws."   Remember when Congress refused to appropriate money to build the absurd wall President Trump wanted?  Trump simply seized other appropriated tax dollars and started building it anyway.  (Very little wall ever got built.)  Not only are MAGA Republicans not real keen on following laws, they don't mind wasting taxpayer money.  I would remind readers that neither of those hallmarks of MAGA Republicans are traditional conservative values.

DeSantis claims that he had people from his administration in Texas several months screening these individuals to ascertain whether they might be inclined to travel hundreds of miles through several states to end up in Florida.  He claims that people from his office fully informed these Florida-bound migrants of other options to live, such as Martha's Vineyard, and they voluntarily agreed to board planes to travel there instead.  Does anyone actually believe this?  I am sure even DeSantis most fervent supporters, know he's lying.  They just don't care.  Lying for a what is perceived to be good cause is perfectly acceptable in MAGA world.

But let's examine that "good cause."  Most of the migrants that DeSantis is busing are refugees fleeing a brutal communist regime in Venezuela.  In the olden days, Republicans welcomed people fleeing from Communist regimes.  Yet more proof that MAGA Republicans are not conservative Republicans.

I'm sure it is just a coincidence that the refugees fleeing Venezuela have brown-skin while the Eastern Europeans fleeing Communist regimes who were welcomed with open arms had white skin.