Tomorrow is the one-year anniversary of the violent assault on the Capitol by Trump supporters, a last ditch effort to stop Congress from counting the electoral votes.  More than 140 police officers were injured during that clash.  Several deaths, directly and indirectly, are tied to the events that day.

In the immediate aftermath of that insurrection, Republican members of Congress took strong stands condemning what happened that day.  Shortly afterwards, they began the process of backing away, with some elected Republicans even some going so far as to now praise the action of the Trump supporters in storming the Capitol.

Republicans are boxed into a political corner because of January 6th.  While many in the GOP base celebrate the violent assault as a patriotic act, the general public finds the violence, and Republicans' support of it, appalling. 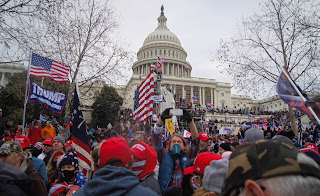 Tomorrow, the airwaves will be filled with video footage reminding people of the violent, and thankfully unsuccessful, insurrection that took place last January.  The video montage will be interspersed with live action from the floor of the United States House and Senate as members of Congress debate several resolutions honoring the Capitol police officers who risked their lives that day, condemning the violence and condemning the attempt to stop the counting of electoral votes.

Kidding. Congress won't be in session!

Democrats could use the one-year anniversary to force Republicans into defending the extreme positions of their most fervent and lunatic supporters or taking the heat by voting against those positions.  Instead, Democratic congressional leaders have decided to give Republicans a pass.

That is called political malpractice.

When I brought up the Democrats' failure to take advantage of the one-year anniversary in a newsletter forum, I received a response that my proposed resolutions wouldn't change anything, people will believe what they want to believe.

Democrats simply do not understand messaging.  They believe if their message doesn't get through the first time or two, it is hopeless and they walk away.  GOP strategists understand that for a message to be believed, it has to be repeated over and over and over again.   Most Republicans didn't wake up on November 4th thinking the Democrats stole the election from Trump.  They came to that conclusion after being repeatedly told that by Trump and the right wing media.

The fact that survival of American democracy may well depend on the political competency of Democrats is truly frightening.