Okay, I have to admit I was wrong.  I said Stacey Abrams would not reprise her 2018 run for Governor of Georgia.  Yesterday, she announced she is running for Governor again.

My reasoning that Abrams would not run again was based on my observation that successful politicians generally do not like to take chances.  While Abrams did not win in 2018, she was widely praised for her voter registration effort and for significantly closing the R-D gap in Georgia.  To run again in 2022 would mean taking a big risk. 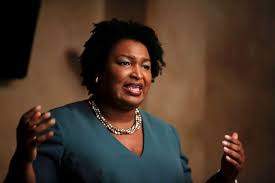 Losing two big races can pretty much end a promising politician's career.  Take Michigan's John James for example.  In 2018, the Republican ran against incumbent Michigan Senator Debbie Stabenow.  In a bad Republican year, he lost by 6.5% a fairly strong performance.  So, he ran for Senate again in 2020, this time against a weaker Democratic opponent, Gary Peters.  James lost again, this time by 1.7%.  While his political career might not be over, overcoming being a two-time loser will be difficult for James.

Abrams was on the ballot in 2018, an extremely good year for Democratic candidates.   She lost to Republican Brian Kemp by 1.4%, or about 55,000 votes.  Abrams will be on the ballot again in 2022, which is likely to be a good Republican year.  It's going to be difficult to duplicate her 2018 effort. One thing you learn in politics is the importance of timing.  A rising tide lifts all boats.  A good Republican year in 2018 will lift Governor Kemp's boat.  And there is nothing Abrams can do to stop that.

But Abrams has a Trump card.  No doubt Abrams is depending on the former President attacking Kemp so harshly that he fatally injures the Governor with the GOP base.  Trump might even cause Kemp to lose a primary, giving Abrams an easier primary opponent.  Trump has already indicated a preference for Abrams over Kemp who he feels wronged him by not helping him steal the Georgia election.

For the record, I'm no Stacey Abrams fan.  I do admire her work registering voters and building out the Democratic infrastructure in Georgia.  But Abrams has also been perpetuating her own version of The Big Lie, claiming that Kemp and Republicans used voter suppression to steal the 2018 gubernatorial contest from her.  In fact, 2018 featured heavy Democratic turnout and record African-American turnout in Georgia.  Abrams to this day will not concede the 2018 gubernatorial race, despite losing Georgia by three times the margin that Trump lost the state.  Most of the media have allowed her to peddle, without demanding any proof, the nonsense that Republicans stole the governorship from her.

If Abrams does get elected Georgia Governor it will almost certainly be because of Donald Trump.

Wet your appettive...as in, piss down your well creased trousers....https://www.washingtonexaminer.com/news/justice/justice-department-tells-court-alternative-mueller-report-found-and-may-soon-be-released Soon, you and the running dogs will have a new moon to bay at as this worthless POS reprises his crimes against America. There is even a book about this POS and similar, it is called Licensed to Lie. Looking forward to your future misrepresentations.....