For four years, President Donald Trump promised he would get Congress to pass an infrastructure bill.  But Trump failed to even get such a bill to pass one chamber, even though the Republicans controlled both houses of Congress up until his third year in office.  It took Sleepy Joe Biden to finally get the ball across the goal line.  Most noteworthy, it took a bipartisan effort in both the Senate (to clear the filibuster) and the House.  In the lower chamber, 13 House Republicans voted for the infrastructure measure.  Given six Democratic squad members voted against the bill in the House, it would not have passed without Republican votes. 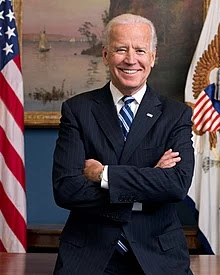 Thirteen House Republicans broke ranks Friday and voted with House Democrats, passing the bipartisan infrastructure bill and drawing the ire of some of their colleagues."

Leading up to the vote, House Minority Leader Kevin McCarthy trashed the bill as "reckless, irresponsible spending" and urged his party not to vote for it.

Rep. Marjorie Taylor Greene of Georgia warned that any Republican who votes for the bill will "feel the anger of the GOP voter," while Rep. Madison Cawthorn of North Carolina said: "Vote for this infrastructure bill and I will primary the hell out of you."

But some Republicans who didn't support the bill focused on their colleagues who did.

Greene labeled them "traitors" and tweeted out a list of their names along with their office numbers.
...
There's a lot of Democrats who call themselves Republicans in the US House," Cawthorn tweeted Saturday.

Rep. Lauren Boebert of Colorado said in a tweet "these fraudulent RINOs should be penalized for advertising themselves as Republicans but governing as Democrats."

Rep. Chip Roy of Texas retweeted Rep. Warren Davidson of Ohio, who said it was "painful" to watch his Republican colleagues deliver the votes to Biden and House Speaker Nancy Pelosi.

Meanwhile, President Trump aimed his fire at the Senate Republicans who had voted for the bill:

“All Republicans who voted for Democrat longevity should be ashamed of themselves, in particular Mitch McConnell, for granting a two month stay which allowed the Democrats time to work things out at our Country’s, and the Republican Party’s, expense!” Trump said in a statement.

The former president called Republican lawmakers who voted in favor of the bill “RINOs” — a widely used term he favors that means “Republicans in name only.” Trump suggested that Democrats would take advantage of Republicans by enlisting their support to pass their $1.75 trillion social spending bill.

“How about all of those Republican Senators that voted thinking that helping the Democrats is such a wonderful thing to do, so politically correct. They just don’t get it!” Trump said.

You'll notice that Trump doesn't criticize the amount that is being spent or what the money is spent on. Details of the infrastructure bill do not particularly concern him (most likely he's never bothered to learn the details).  What concerns him is that passage of the bill hands Biden and the Democrats a "win."  Never mind what is best for the American people. Trump has never been concerned about that.

Unlike Trump, most Trumpers do complain about the price tag of the bill, some oddly calling spending on infrastructure "socialism."  If Trumpers have a superpower it is a lack of intellectual honesty.  That the positions they take, when compared to previous positions they held, smack of hypocrisy doesn't faze them.  When the Former Guy was in office, Trumpers had no problem whatsoever with lavish spending measures, and running up huge deficits.  They also would have had no problem with the infrastructure bill that passed...if it had Trump's name on it.  That Biden's name was affixed to the measure...that's what bothers them.

Not that there aren't things that in the infrastructure bill that shouldn't cause a true fiscal conservative to pause, and possibly vote against it.  I don't think government should be in the business of building out electric charging stations (government help was not needed to build gas stations when cars first became popular).  And I think government pouring increased funds into antiquated mass transit systems is akin to flushing tax dollars down a toilet.

I've told this story many times before, but I will do so again.  When I transferred from Hanover College to Ball State in 1980, I became involved in conservative politics.  Believe it or not, there was a conservative tide that had washed over college campuses during those years.  It was a highly intellectual movement...conservatives had big ideas back then and they approached selling those issues in a positive manner.  For me, issues like balanced budgets, privatization, school choice, enterprise zones, etc. were important.  More generally, I was concerned we were drifting toward socialism and wanted a return to less government interference in the free markets.  I had also written a paper on pre-natal development in a health science class. a project that pushed me in the pro-life direction.

I could be characterized as a small government conservative with libertarian views.  Naturally some of my positions have evolved over the years.  I think privatization, for example, is good on paper, but has been bungled horribly in practice.  And privatization certainly doesn't work in some contexts such as privatized jails/prisons.

Nonetheless, I thought those were the most important issues.  But the primacy of those issues was based on the assumption that both parties, Republicans and Democrats, believed in American democracy and that disputes about policies would be decided in free and fair elections.  If there ever was a time when a party turned its back on American democratic institutions, trampled on the Constitution and embraced rule by autocracy, then those aforementioned issues would take a back seat to the need to fight for the survival of the American Republic.

We are at such a point.   A sizeable percentage of Republicans no longer believe in the American experiment of democratic self-rule.   They instead lionize dictators in Hungary, Turkey and Russia as providing the model of autocratic leadership they want to see the United States adopt.   What is worse, they are fine with political violence to overturn the results of democratic elections that do not go their way.

That's not an abstract assumption.  We have a real live example of Republican support of electoral violence.  On January 6th, Trump supporters, supposed "Backers of the Blue," assaulted hundreds of police officers as they stormed the Capitol to stop the counting of electoral votes in a last ditch effort to keep Donald Trump in power.  Their actions that day resulted in the deaths of several people.  They brought with them makeshift gallows to hang Vice President Mike Pence who they claimed was a traitor because he chose his constitutional duty over fealty to Donald Trump.  The collective GOP response to this violent insurrection has been a collective shrug of the shoulders to full support.

Since the January 6th insurrection we have learned that Donald Trump and his minions had developed an extensive plan to steal Joe Biden's win at the polls.  That plan was only foiled by elected and appointed local, state and national Republicans who insisted on counting and certifying the votes honestly.  Since that foiled coup attempt, Trump has made it a point to target those Republicans for removal, replacing them instead with loyalists who will do his bidding next time around. With Trump's urging, laws are also being considered by Republican legislatures that will allow them to override the popular vote for President in their states.  Not surprisingly, a bipartisan committee attempting to investigate what happened on January 6th is being stymied by President Trump who is making bogus legal claims to try to delay the American people finding out his exact role in the attempted insurrection.

Until my Republican Party returns to supporting American democratic institutions, the Constitution and free and fair elections, none of those issues I have cared about my entire adult life matter.   What good is winning some Trumped-up fight against "socialistic" policies if the cost is the end of American democracy?

All PBS needs to do is have Big Bird insult Ted Cruz’s wife and he will then start to praise them endlessly!

https://www.powerlineblog.com/archives/2021/11/crb-the-eastman-memos.php especially see the comments section where various points of view are offered bearing on the question as to whether or not Paul's sorts of republicans actually do have spines of bone or it they are just cartilage.

People forgot that Comey was a Republican.....and, as such, displayed republican values like senility....Meanwhile, all the lies about Trump have pretty much been traced to their source, duh FBI. https://www.jewishworldreview.com/1121/hanson111821.php And, paid for by that slut who ran for President.....

https://amgreatness.com/2021/11/18/terror-in-the-capitol-tunnel/ Curious that Republicans are so silent on this long known about issue.

So, you are down on Ted Cruz now a days? Meanwhile, trust the

The GOP has become a cult full of nutjobs.