Indiana Does Not Have the Most Gerrymandered State Legislative Districts

People in Indiana often complain that their legislature is "the worst."  I actually researched the issue a few years ago and found that residents of other states say the same thing about their state's legislature.  So the description of the Indiana General Assembly by Hoosier critics is not really unusual or necessarily accurate.

Now that the states have their decennial census data, they are drawing new boundary lines for their legislative and congressional districts.  In most states, this is a partisan process, done by the state legislature.  Indiana Republicans just released their proposed maps.  It did not take long for the allegations to start that Indiana GOP leaders have drawn the most gerrymandered legislative districts in the country. 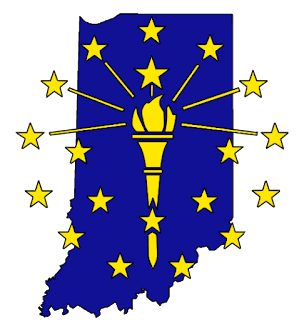 But is that claim, like the claim Indiana's legislature is "the worst," an embellishment?  Almost certainly.

It is hard to know how gerrymandered a map is given the difficulty in obtaining election result data on a precinct-by-precinct basis and assigning that information to the newly drawn districts.  Plus, Indiana was one of the first states to develop proposed districts.  So it is hard to compare Indiana's map to other states' 2020 census legislative maps, since most do not exist yet.

But there have been extensive studies of the 2010 census state legislative maps, including a study titled "The Worst Partisan Gerrymanders in U.S. State Legislatures" issued by the USC Schwarzenegger Institute for State and Global Policy prior to the 2020 election.   The report concluded that the top 11 states with worst "legislative partisan gerrymandering" are:

(Notably the report calls this a top 10 list, but actually 11 states are listed.)

As one can see, Indiana does not crack the top 11.  For the record, maps drawn by Republican legislators have resulted in the GOP having huge majorities in the Indiana House (71-29) and the Senate (39-11) as of the 2020 elections.  Indiana Republicans did pick up four House seats in the last election.

In analyzing the data, the Schwarzenegger Report (I'm going to call it that for simplicity's sake) compared statewide Republican and Democratic state legislative vote versus seats the party won.  The Report found that there were a handful of states which had "minority rule," the party which had a minority of the statewide legislative vote had a majority of legislators elected in the upper (Senate) and/or lower (House) legislative chambers.  Those states are:

Table 2: Minority Rule in U.S. State Legislative Upper Chambers
Notably these are all states in which Republicans go from minority party to majority via redistricting.  Until fairly recently, Indiana was an anomaly.  The Democrats drew the Indiana House maps in 1990 and 2000 and won a majority in the House in most elections utilizing those maps.
The Schwarzenneger Report also looked at states in which the party controlling redistricting excessively increased its margin during redistricting.
Table 3:  Worst state house legislative gerrymanders, disproportional seats relative to votes
Table 4:  Worst state senate legislative gerrymanders, disproportional seats relative to votes
It is doubtful that given how well Indiana Republicans have done under the 2010 maps that the 2020 maps could be more gerrymandered in the party's favor.  The number one priority in partisan redistricting is not gaining more seats, but incumbency protection.  Cutting incumbents' comfortable winning margins to create more districts favoring the party drawing the lines forces those incumbents into competitive races they would like to avoid.  Most likely Indiana's 2020 maps are more about shoring up the numbers in Republican members 'districts rather than creating more GOP districts.
Probably the best example of this is the 1st congressional district, which last election was won by the Democrat Frank Mrvan with just over 56% of the vote.  Indiana Republicans could have fairly easily shifted lines around and made the district a marginally Republican one.  But to do so would have meant taking GOP votes away from neighboring districts, giving those Republican members of Congress  tougher re-election battles.  As a result, Mrvan gets to keep his Democratic-leaning district.
Finally, it should be noted that having commissions, instead of partisan legislators, draw district lines does not mean the districts are more going to more closely reflect the partisan breakdown of a particular state.  The most extreme example of lopsided numbers is in Hawaii.  In 2020, Democrat Joe Biden received 63.7% of the Hawaiian vote.  Democrats though control the Hawaiian House of Representatives 47-4 (92.1%) and the Senate 24-1 (96%).  A bipartisan commission, with members appointed by Democratic and Republican legislative leaders, drew the Hawaiian maps.
Posted by Paul K. Ogden at 5:35 PM