Congress and the public might be sharply divided by bitter partisan politics, but justices on the United States Supreme Court appear to have not gotten the memo.  Two decisions handed down by the Court this morning reflect that the Republican and Democratic-appointed justices are more than willing to cross partisan lines depending on the facts of the case.

By a 7-2 vote, the Supreme Court dismissed a Republican-led attempt to have the Affordable Care Act, i.e. "Obamacare," declared unconstitutional.  Conservative justices Clarence Thomas, Brett Kavanaugh, Amy Comey Barrett in Fulton v. Philadelphia joined Chief Justice Roberts and the Court's three liberals to render the decision.  The Court used a technicality - a lack of standing - to dismiss the case, but it is clear the Court is growing tired of these challenges to the ACA.  The ACA can still be repealed, it will just have to be by Congress, instead of the courts. 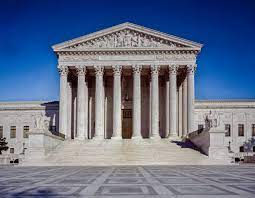 While Republicans are licking their wounds over another ACA loss, they do have something to celebrate - another religious liberty win in the courts.  The nice justices unanimously ruled that the city of Philadelphia violated the First Amendment when it froze the contract of a Catholic foster care agency that refused to work with same-sex couples as potential foster parents because the Catholic Church believes marriage should be between a man and a woman.  Philadelphia was enforcing its anti-discrimination law but had not carved out an exception for religious institutions with doctrines that conflict with the law.

The decision seems to contradict Employment Division v. Smith, the controversial decision written by Justice Antonin Scalia in 1990 which says that as long as an anti-discrimination law applies generally to everyone it does not violate the First Amendment Free Exercise of Religion Clause.  However, the majority wasn't willing to to go that far, a decision which led Justice Gorsuch (joined by Justices Thomas and Alito) to pen a concurring opinion arguing that Employment Division should be definitively overruled.

Nonetheless, it is astonishing that the Court's three liberal justices - Kagan, Breyer and Sotomayor - voted in favor of religious liberty when confronted with applying an anti-discrimination law.  And this is not the first time.

https://theintercept.com/2015/02/26/fbi-manufacture-plots-terrorism-isis-grave-threats/ It is old but the spots of the leopard do not vanish overnight. the only person murdered in DC at that mostly peaceful protest was a young lady.