On Tuesday, former Minneapolis police officer Derek Chauvin was convicted of second and third degree murder and second degree manslaughter for his killing of George Floyd last year during the latter's arrest for allegedly passing a counterfeit $20 bill.  Minnesota's sentencing guidelines recommend 12.5 years in prison for each of the murder charges and 4 years for the manslaughter conviction.  The judge could run those sentences concurrently so Chauvin could be out much earlier than people realize.  Chauvin though will have to spend the rest of his life as a convicted felon and is unlikely to ever work in law enforcement again. 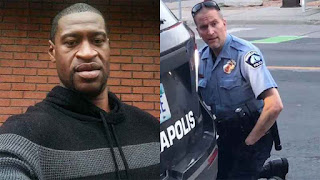 Much has been made of Rep. Maxine Waters' comment to Minneapolis protesters on the need to be more confrontational as grounds for an appeal.  Also, the failure of the judge to sequester the jury is cited in some reports as justification for appeal.  While those claims undoubtedly will be included in the appellate brief, they are long shots at best. Instead, the focus will be on more fertile appellate issues such as jury instructions and the judge's decisions regarding admission of evidence and testimony.

I think we must have an appreciation for the difficult work law enforcement officers do and give them the benefit of the doubt when they're making split-second decisions that may involve the life and death of others, including their own.  That's why it is so wrong that the police officer was immediately condemned for the shooting of the black teen in Ohio.  Turns out body camera footage showed why she was shot - she was wielding a knife and trying to stab two other young women.

The Chauvin-Floyd confrontation was not a close call however.  Floyd was handcuffed, face down on the pavement.  Chauvin kneeled on his neck for several minutes after Floyd had stopped moving.  In fact, even after other officers checked and found Floyd without a pulse, Chauvin didn't let up.  A paramedic tried to intervene to save Floyd, but Chauvin would not allow it.  In total, Chauvin kneeled on Floyd's neck for 9 1/2 minutes.

Prior to the Floyd incident, Chauvin had been involved in three police action shootings, one involving a death.  He had 18 complaints filed against him.   I take that with a grain of salt as complaints are inevitable if one is a police officer.   The number and nature of the complaints though raise red flags.  At trial several law enforcement officers, including supervisors, testified against Chauvin.

It is just hard to think what was going through Chauvin's mind. At about the fourth minute when Floyd was no longer moving, one would think it would occur to the officer that it might be time to remove his knee.  Yet Chauvin kept his knee on Floyd's neck.

While I understand the eagerness to celebrate justice being served, it is still a tragedy from top to bottom.  Hopefully though the tragedy will bring light to the fact that whites and blacks are not treated equally by the judicial system, particularly when it comes to interactions with law enforcement.  I honestly thought everyone, including those of us with white skin, knew that.

Back when I was practicing law, I represented a few clients in the Carmel City Court. They employed a "cattle call" in which a multitude of defendants had their cases set for early morning and the judge would make his or her way through the docket wrapping up by around noon.  Almost all of the cases were traffic offenses.  Even though Carmel was then maybe 95% white (certainly less so now), about 50% of the defendants in that courtroom were African-Americans and Latinos.

Several years ago, I was contacted by a woman about representing her in a divorce.  She was employed as a manager of a Carmel Kentucky Fried Chicken, located just north of the Indianapolis/Marion County line.  We began talking about her business.  The manager, who is white, said that her black employees were constantly getting stopped by the Carmel City police while her white employees rarely were.  She also said the Carmel police would regularly come in to the restaurant's parking lot and run the plates of her workers.

A couple years ago, I talked to some African-American fast food employees who worked at Carmel restaurants just north of 96th Street which divides Marion County (Indianapolis) and Hamilton County (Carmel).  Many of the employees would actually park their cars at businesses south of 96th Street and walk the 1/4 to 1/2 mile to their employer located across the street in Carmel.   The employees surprisingly were not really angry about the situation.  They accepted that was something they should do if they wanted to work at that restaurant.

While much of the supposed advantage that white skin provides ("white privilege") is exaggeration, there is no question you are better off being white if you're going to be stopped by police in most jurisdictions.   If that's defined as "systemic racism," then yes that is a real thing.