MLB Hypocrisy on its Decision to Pull All-Star Game Out of Georgia; My Lifelong Boycott of the "Midsummer Classic"

Although former President Trump has requested it, I am not going to boycott major league baseball this year.  This is especially true since the Reds are currently in first place...okay they are only four games into the 162 game season and tied with the Cubs.  But it still counts.

I am, however, going to boycott the All-Star game that MLB has announced it is moving out of Atlanta due to non-existent new restrictions on voting passed by the Republican-controlled Georgia legislature.

Okay, let me be perfectly honest. Although a lifelong baseball fan, I have never been a fan of the All-Star Game.  It was a lame contest when I was young and with the expansion of the all-star roster over the years it has become even more lame.  Players are constantly shuffled in and out of lineups.   Keeping track of who is playing and out of the game is next to impossible.   It is not a true baseball game in any sense.   An inning is about as much of the game that I can take.  I surveyed my friends who are big baseball fans.  None of them care about watching the All-Star game, which MLB wishfully calls the "Midsummer Classic." 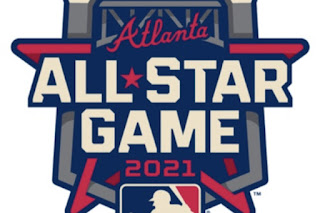 I used to play in an amateur baseball league in my early 30s.  One year, after the conclusion of the season, I was asked to play in the league's all-star game.  I am pretty sure it was a lack of players wanting to participate in that post-season, early fall exhibition that spawned the invitation and not my playing skills. But it still counts.

The one thing MLB has going for it is that, while its all-star game is a pointless, insipid contest, the other professional leagues such as the NBA and NFL have even worse all-star games.  Never seen the NHL all-star game, but I'm sure it is also awful.

When MLB announced its decision to move the all-star game out of Atlanta (which game will now be played in Denver), the league avoided the specifics of the Georgia law it found to be objectionable.  It looks like the decision was driven more by politically active players who got caught up in the zeal to condemn the law.  MLB officials know that players have never been keen on playing in the meaningless exhibition game anyway (they prefer the four days off in the middle of the long season to spend with their family) and would jump at a reason to boycott the game.

During a recent press conference, Georgia Governor Brian Kemp denounced the move of the MLB All-Star game from the Peach State and did a point-by-point comparison of voting in Georgia versus voting in New York.  As Kemp pointed out, New York has less early voting than Georgia, unlike Georgia does not have no excuse absentee voting, and, like Georgia, it is a crime in New York to give food and water to people in line.  Yet apparently MLB has no problem having its headquarters in New York.

CNN viewers though would never hear Governor Kemp make the case.  Early into the Kemp press conference, CNN cut away for an interview with Democrat Atlanta Mayor Keisha Lance Bottoms in which the Mayor continued the false narrative, without evidence, that the new Georgia law imposes sweeping new restrictions on voting.  While former Georgia gubernatorial candidate Stacey Abrams initially was reluctant to criticize the new Georgia law (compared to her early criticism of the restrictive proposals that were not included in the final bill), she soon came around to embracing the false narrative and now refers to the new Georgia election law as Jim Crow 2.0.

The Jim Crow comparison is more than over-the-top, misleading rhetoric.  It insults the legacy of civil rights leaders some who risked their lives to oppose Jim Crow laws in southern states, laws that restricted where African-Americans could live, eat, go to school, and which laws placed substantial and real obstacles on the right of blacks to vote.

There are a couple major problems with the Georgia bill - the legislature stripping power from the Secretary of State and giving itself the authority to take over county election boards the legislature believes is underperforming.  Georgia Secretary of State Brad Raffensperger was one of the few Republican elected officials who were willing to publicly refute Trump's big lie about election fraud and refused to help the former President steal the election in Georgia.  Still these "inside baseball" changes to the Georgia election law do not directly impact voting and do not seem to be enough for the faux outrage against the bill.

One of the ironies is that the MLB controversy has given Kemp an opportunity to shore up support with Republicans, including most importantly the Trump wing that was ready to take him out in the primary.

Democratic Senator Raphael Warnock and presumed Georgia gubernatorial candidate Stacey Abrams do run the risk of overplaying their hand on the Georgia election law.  To win in Georgia in 2022, a midterm election which should be favorable to Republicans, they need to appear moderate and reasonable.  Suburban voters might get turned off by Warnock and Abrams' false characterization of a bill, which in many respects makes it easier to vote.

In short, the odds of Brian Kemp being re-elected governor in Georgia in 2022 has gone way up.

"Cancel culture is bad, so I'm going to boycott." Talk about hypocrisy.

You may have missed the joke that, although a big MLB fan, I ALWAYS boycott the All-Star game because it's a lame, boring, stupid, meaningless game. Has nothing to do with politics.

Yes, I do wish they'd "cancel" the All-Star game for the above reason. Permanently. Get rid of it. Just name people "All-Stars" at the end of the season and give out awards. No need for the ridiculous All-Star game.