One of my first things I do in the morning is read Prof. Sheila Suess Kennedy's blog.   In addition to being a fellow attorney, Sheila, according to the bio on her blog, is "Emerita Professor of Law and Public Policy at the School of Public and Environmental Affairs at Indiana University Purdue University Indianapolis. Until her retirement in December of 2020, she was a Faculty Fellow with both the Center for Religion and American Culture and the Tobias Center for Leadership Excellence, an adjunct professor of political science and founder of the Center for Civic Literacy at IUPUI."

Having taught political science as an adjunct instructor at IUPUI and the University of Indianapolis for some 25 years, I concur with Sheila's frequent articles emphasizing the importance of civil education.  So many problems today are exacerbated by people who don't have a grasp of how politics, government, and the world in general, works. 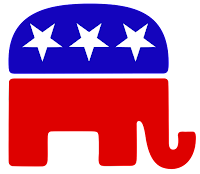 I would not want to go back into a college classroom today to teach politics.  It's a brand new game, and I'm still struggling figure it out.  One thing that has changed dramatically is fundraising.

That brings me to today's column.  Sheila pens an article talking about the Republican Party and corporate fundraising.  Sheila's readers often chime in with their own take on the article.  The readers today seem to sound the same theme - that GOP criticism of corporations is not sincere, that the Republican Party will continue to pursue the big corporate contributions that dictate what Republicans do in office.

For the record, I think it is fair to say that, while Sheila's readers are quite thoughtful and erudite, they tend to be older and more liberal than average.  Being older myself, I find it difficult to adjust to the changing political landscape, to understanding the new rules of politics.  One thing I've gained an understanding of, however, is the new way in which politicians raise money.

If you would have told me that there would come a day in politics in which elected members of Congress could eschew hosting big fundraising events attended mostly by corporate donors in favor of raising small donations from individuals, mostly online, I would have applauded the change.  The lack of corporate contributions means these elected officials can now act in a way that is in the people's best interests rather than the interests of their big corporate donors.

Or so I thought.  That supposed "good government" change to fundraising practices has turned ugly. For elected officials to get a plethora of small donations, they have to draw attention to themselves.  The best way to do that is to act as crazy as possible, say outrageous stuff, and get as much time on Fox News, NewsMax and other conservative media outfits.

The fundraising game has changed.

Oh, and that Citizen's United decision that allows corporations and outside groups to spend an unlimited amount on election activities (albeit not direct contributions to candidates)?  The day is rapidly coming when Democrats benefit from the decision more than Republicans.  Let's see if they still want the decision overturned then.  My guess is it will be like gerrymandering.  Democrats oppose gerrymandering until the minute they are in power and get to draw the maps.

If she is your go to source I'd read her stuff more carefully....as her commentators are mostly loons. She is not well read and has a very thin skin when reminded of it? As for Citizen's United, would you prefer Ms. Clinton being able to shut down critics of her corruption prior to an election or ever? Do you think the lying media should be the only sources for information about their corrupt cronies? The obvious answer, you haven't thought about much.

Shelia is quite a crack pot and while having surface facility with words often enough displays a total lack of knowledge prior to say, AD 1600. She would profit much from the learned professor Hill of that same school....After The Natural Law. Her claptrap of God and Country suffers from shortsightedness, facile impressions of a half educated and pretension laden stuffed shirt. She does have a number of unheard of authors which she quotes in that distressing manner we see too often among folks with few thoughts of their own who believe that someone else can say things better. So far, I haven't found her pushing whoppers that you and the running dogs would ever catch but she has plenty of them which will inspire mirth among those better read. Which is to get to the point here, https://greenwald.substack.com/p/the-media-lied-repeatedly-about-officer?token=eyJ1c2VyX2lkIjoyMzM0Nzg1OSwicG9zdF9pZCI6MzUzNDk3MjIsIl8iOiJMcmh1WCIsImlhdCI6MTYxODg3NjA3NCwiZXhwIjoxNjE4ODc5Njc0LCJpc3MiOiJwdWItMTI4NjYyIiwic3ViIjoicG9zdC1yZWFjdGlvbiJ9.G0Lx8-UpgkMWf85QNecQIMK6bN5EoSFvVnPEC_U_kBw Wherein paul is not called out by name but his dewy eyed worship of the NYT calls into question his judgement and gullibility. Let us know when you will publish a retraction....