The year was 1987, and I was flying from Indianapolis to Washington, DC.  I had signed up for congressional campaign school which offered training for prospective candidates and their campaign staff.  The class had workshops and speakers, the most prominent of which was a young Georgia congressman named Newt Gingrich.

While getting on the plane I saw Mike Pence and struck up a conversation.

In law school, I was editor of the law school newspaper, the Dictum.  Pence, who was a year ahead me, would occasionally submit a cartoon for the publication.  He would often stop by the Dictum's office, and we would both talk politics.  Being outspoken conservatives, a rarity at Indiana University School of Law at Indianapolis, we certainly had politics in common.  We also were both from Southern Indiana (he Columbus, me Madison) and had both attended tiny Hanover College at the same time (though I left after my Freshman year.) 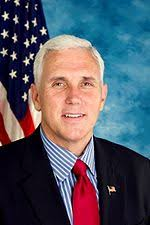 Up until that plane ride, I had not known Pence was interested in running for elected office.  After returning from campaign school, I decided not to run for Congress.  Pence though did run and lost, twice, before he won in his third attempt.

People don't believe me, but in law school Mike Pence was very personable and well-liked, even by the liberals in the school.  He was very down-to-earth and had no problem making jokes at his own expense.  His first few years in Congress, Pence was a principled conservative who wasn't afraid to take on those in powers in pursuit of those principles.

Somewhere along the line, ambition got the better of Mike Pence.  I think it was probably near the end of his time in Congress, certainly before he ran for Governor.  Like ambitious people do, sometimes they start setting aside their principles to curry favor with those who they think might help them get ahead.  That strategy ultimately led to Pence becoming VP.  For the last four years, Pence has continued selling out his principles in the hopes of courting Trump's fervent base of supporters, thus positioning himself to run for President after Trump leaves office.

Last night, I saw a Mike Pence I haven't seen in 25 or more years.  Pence stood up for his principles and the Constitution, and refused to be brow beat by Trump into doing something he could not legally do...disregard electoral votes that did not favor Trump in order to hand the President a second term.  He was impressive, a leader this country desperately needed as pro-Trump rioters were literally banging on the doors of the chamber trying to get in and stop the count of electoral college votes which would hand the election to Joe Biden.

Of course, the Trump faithful immediately turned on Pence on Twitter.  But, realistically, Pence's political career was over before he stood up to Trump anyway.  Now he is free to do the right thing.

The nation is in crisis. There is no telling what President Trump will do in his final 13 days in office.  He's already instigated his supporters to attack and invade the Capital.   How much worse can it get. Well, Trump has the nuclear codes at his fingertips, so it could get much, much worse.  We cannot trust having Trump in office for nearly two more weeks.  He is obviously not mentally well.

Time to dust off the 25th Amendment.  If Pence led the charge to use the 25th Amendment to immediately remove Trump from office, he would be forever remembered as a hero who came through when the nation needed a leader.