Joe Biden's national lead over President Donald Trump nearly doubled after Tuesday's presidential debate, with voters saying by 2-to-1 that Biden has the better temperament to be president, according to a new NBC News/Wall Street Journal poll.

The poll was conducted in the two days after the unruly and insult-filled debate Tuesday but before Trump tested positive for Covid-19 and was hospitalized Friday at Walter Reed National Military Medical Center. 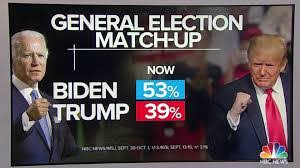 Biden is now ahead of Trump by 14 points among registered voters, 53 percent to 39 percent — up from his 8-point lead in the previous poll, before the debate.

The 14-point advantage represents Biden's largest lead in the NBC News/WSJ poll during the entire campaign; his previous high was 11 points in July.

Considering the Electoral College, it is a mistake to focus too much on national polls, especially this late in the campaign.  However, national polls are good at highlighting demographic shifts critical to the success of presidential campaigns.  The major data point in the NBC poll is that, among voters 65 and over, Biden leads 62-35.  No Democrat has won the senior vote since 2000.  In 2016, Donald Trump won the senior vote over Hillary Clinton by a 9 point margin, 53-44.

The NBC poll also shows Biden winning among suburban women 58-33.  Although Hillary Clinton targeted this demographic group in 2016, she had limited success. The changing partisanship of the suburbs could lead to a 2020 Democratic wave at the national and state level.