No, Virginia, Trump Did Not Win His Debates Against Hillary Clinton; He Lost All Three of Them...Badly

In a USA Today/Suffolk University poll released early last week, 47% of those polled thought President Trump will win the September 29th debate against Democratic nominee Joe Biden.  41% see Biden as being the winner.

Why does a majority of people think Trump will win the debate?   Well, Trump has for weeks championed himself as being a strong debater, citing in particular his three debate wins over Hillary Clinton on in 2016. 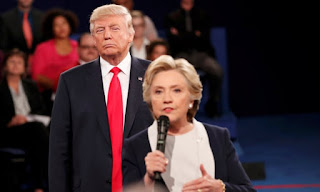 I know this will come as a shocker.  Trump is lying.  Gallup polled Americans who watched the debate to find out their thoughts on who did a better job.  Hillary Clinton won the first debate 61-27, the second debate 53-35, and the third debate 60-31.  None of the debates were close.  Trump came across in all the debates as someone who was not prepared and lacked knowledge about the several issues brought up during the debate.  That is probably because Trump did not prepare for the debates and lacked knowledge about the issues.

I repeat, Trump performed very, very badly in all the Trump-Clinton debates.

I also watched all the GOP debates during the primaries.  Trump did not come close to winning any of those either.  He was often a bystander during those debates, disappearing for long stretches of time while the other candidates displayed their knowledge of the issues.

One thing Trump has learned if that if you tell a lie enough times, people will eventually start believing the lie.  That's why a large segment of Americans believe Trump is a strong debater.

While praising his own debating skills, the Trump campaign has played down Joe Biden's mental acuity.  At his rallies, Trump regularly insists "Dementia Joe's" condition is so bad, he doesn't know where he is or what he's doing.

Not that Biden is a great debater either. During the Democratic primary debates, he often became lost in the crowded field, going long periods of time without talking.  His primary debate performance was strikingly similar to Trump's, except that Trump was rarely the target of attacks by fellow debaters while Biden often was.

But when Biden finally got a chance to do a head-to-head debate against Bernie Sanders, Biden did very well.

Trump has lowered the bar so much for Biden is that pretty much all he has to do now is show up and say a few sentences without drooling all over himself, and he'll be declared the winner.  That's why Trump campaign operatives are now desperately trying to recast Biden as a great debater, a message that is being drowned out by Trump's rhetoric.

The bottom line is that Biden is much more knowledgeable than Trump when it comes to the issues that will be raised during the debate.  And there is no evidence that Biden suffers from dementia.  Yes, Biden stutters, stammers, sometimes loses his train of thought, and commits plenty of gaffes.   That is not a new development - Biden has been that way his entire political career.   Compared to Trump - who often forgets the question asked, rambles, loses his train of thought, and commits more gaffes than any politician ever - Biden comes across as sharp as a tack.  Challenging Biden's mental acuity, causes an examination of Trump's own mental soundness.  That's not a battle addle-brained Trump is likely to win.  See Fox News poll below on the candidates' mental fitness.