During the 2016 primaries, Donald Trump sold himself as a self-made, successful businessman.  Having followed Trump's career, I knew neither was true - that he was not "self-made" or a "successful" businessman.  Yet, so many Republicans were willing to buy the image Trump was selling.  But it wasn't just Republicans.  Members of the media would label Trump a "billionaire," even at times inflating the billion to ten billion, an estimation of Trump's worth that comes from, well, Trump.

Trump has zealously fought disclosure of years and years of tax returns, ostensibly based on the claim that those returns are under an IRS audit.   Of course, that is not why Trump was not disclosing his tax 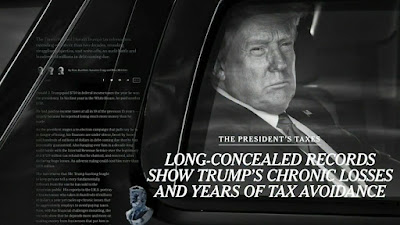 returns.  The real reason was that Trump did not want the public to see that he is a spectacularly bad businessmen who has used questionable, and perhaps illegal, maneuvers over the years to avoid paying federal income taxes.

The New York Times though got ahold of Trump's more recent tax returns and published a story yesterday which belies the myth of Trump as business tycoon.  In the article, the Times reports that Trump paid just $750 in taxes in 2016 and 2017, which is actually more than the 11 of the 18 years when he paid zero taxes.  The article offers this assessment of Trump's career as a businessman:

The tax returns that Mr. Trump has long fought to keep private tell a story fundamentally different from the one he has sold to the American public. His reports to the I.R.S. portray a businessman who takes in hundreds of millions of dollars a year yet racks up chronic losses that he aggressively employs to avoid paying taxes. Now, with his financial challenges mounting, the records show that he depends more and more on making money from businesses that put him in potential and often direct conflict of interest with his job as president.

Ultimately, Mr. Trump has been more successful playing a business mogul than being one in real life.

Yeah, no doubt.  But the fact that pretend billionaire Donald Trump has paid little or no federal income taxes over the past two decades is hardly the most significant revelation in the NYT article.  The article details dangerous foreign conflicts-of-interest, crushing personal debt, an IRS attempt to claw back a large tax refund, and questionable, quite possibly illegal, maneuvers to avoid taxes and transfer money to his daughter, Ivanka.  Oh, and let's not forget mysterious "consulting fees" paid on overseas real estate projects which may well be disguised bribes in contravention of the Foreign Corrupt Practices Act.

Before winning the Presidency in 2016, Trump had exactly one other success in life - becoming a reality show star.  As co-owner of the Apprentice franchise, Trump earned a sizeable fortune playing the role of a successful businessman.  A shocking revelation from the NYT article is that Trump has now so squandered his Apprentice money that he has taken out $300 million in loans against Trump properties which he has personally guaranteed.  Those loans are coming due within the next four years.

Not that all Trump's business ventures are losing money.   Trump Toweris turning a profit.  So too is Mar-a-Lago, the  Florida resort which has become a magnet for domestic interest groups and foreign governments seeking to curry favor with the President. (It didn't hurt too that Trump doubled the admission fee to the club the month he took the office.)  Trump's branding business have been a money maker.   But other than those ventures, Trump's other businesses, especially the commercial properties the Trump Organization owns and runs, have proven to be spectacular failures.  Losing large amounts of money running a family business does provide one benefit though - you can dramatically reduce your taxes.

As the Apprentice income began drying up, Trump turned to other sources to prop up his businesses:

In 2012, he took out a $100 million mortgage on the commercial space in Trump Tower. He took nearly the entire amount as a payout, his tax records show. His company has paid more than $15 million in interest on the loan, but nothing on the principal. The full $100 million comes due in 2022.

In 2013, he withdrew $95.8 million from his Vornado partnership account.

And in January 2014, he sold $98 million in stocks and bonds, his biggest single month of sales in at least the last two decades. He sold $54 million more in stocks and bonds in 2015, and $68.2 million in 2016. His financial disclosure released in July showed that he had as little as $873,000 in securities left to sell.

Let me translate.  Trump took assets that were in secure investments and sold them to prop up his businesses which regularly lose money.  By the way, how many 70 year old plus "billionaires" have less than $1 million of that fortune in securities, i.e. stocks, bonds, etc.?  I'm guessing none of them.

The NYT article also revealed questionable consulting fees.  Ivanka Trump was paid nearly $750,000 by the Trump Organization to consult on two hotel projects even though she was an executive of the Trump Organization.  The NYT speculates that Ivanka's payments may well be an attempt to transfer wealth to the Trump daughter while avoiding gift taxes.  It is a maneuver similar to how Trump's late father, Fred, used to transfer money to his children.  Fred named his children employees of one of his businesses and paid them large salaries despite the fact the children, then minors, did no apparent work for the business.

Maybe of more concern is the consulting fees the Trump Organization paid on foreign projects, particularly one in Turkey:

On the failed hotel deal in Azerbaijan, which was plagued by suspicions of corruption, a Trump Organization lawyer told The New Yorker the company was blameless because it was merely a licenser and had no substantive role, adding, “We did not pay any money to anyone.” Yet, the tax records for three Trump L.L.C.s involved in that project show deductions for consulting fees totaling $1.1 million that were paid to someone.

In Turkey, a person directly involved in developing two Trump towers in Istanbul expressed bafflement when asked about consultants on the project, telling The Times there was never any consultant or other third party in Turkey paid by the Trump Organization. But tax records show regular deductions for consulting fees over seven years totaling $2 million.

It is speculated that these consulting fees were bribes paid to local Turkey officials who controlled whether the Trump project would move forward.  While foreign government officials often expect bribes as a cost of doing business in their country, it is actually a violation of  of the Foreign Corrupt Practices Act for American companies to pay such a bribe.

The NYT article points to a need for Congress to enact laws requiring presidential candidates to release their taxes, put assets into a blind trust, and avoid conflicts of interest.  It is simply not enough that these practices are  "norms" that candidates will voluntarily follow because of political and public pressure.  Trump has proven that approach does not work.