FiveThirtyEight: Democrats are Slight Favorites to Win Control of Senate

The Democrats are slight favorites (58%) to win control of the Senate according to a new statistical model released by FiveThirtyEight.   Republicans currently control the chamber 53-47.  Because the Vice-President sits as President of the Senate, Democrats need a net pick up of 3 seats, if Biden wins, and 4 seats if Trump wins.  Add one to each of those though as it is almost certainly the Democrats lose the Senate seat the party gained during the 2017 special election.

I would place the odds of Democrats winning control of the Senate a bit higher (let's say 65%) and have a few differences on the odds FiveThirtyEight assigned to particular races.  Let's examine some of them:

Maine:  Democrat Sara Gideon is given a 53% chance of ousting Republican Senator Susan Collins.  Too low. Democrats are going to win the President's race big, at least statewide, and I don't think Collins can overcome that.  This FiveThirtyEight prediction is a Democratic pickup. 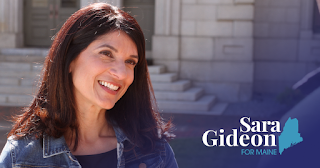 Iowa:  Republican Senator Joni Ernst is given a 59% chance of winning re-election.  I'm fine with those odds.

North Carolina:  Democratic challenger Call Cunningham is given a 62% chance of unseating Republican Senator Thom Tillis.   This FiveThirtyEight prediction is a Democratic pickup.

Montana:  Republican Senator Steve Daines is given a 68% chance of turning back the challenge posed by former Montana Governor Steve Bullock.  That's too high.  Maybe 60%;

Colorado:  Former Colorado Governor John Hickenlooper is given a 68% chance of defeating Republican Senator Cory Gardner.  That's about right.  This FiveThirtyEight prediction is a Democratic pickup.

Alabama:  Republican challenger Tom Tuberville has a 72% chance of defeating Democratic Senator Doug Jones.  Those odds may be too low.  I'd make it closer to 80%.   This FiveThirtyEight prediction is a Republican pickup.

Arizona:  Democrat challenger Mark Kelly has a 78% chance of ousting Republican Senator Martha McSally.  Too low.  McSally is a dreadful candidate. I'd put the odds closer to 85%.  This FiveThirtyEight prediction is a Democratic pickup.

South Carolina:  No way Lindsey Graham has an 85% chance of winning re-election. Make that 65%.

Kentucky:  Senate Majority, probably soon to be Minority, Leader Mitch McConnell is a solid favorite to win re-election, but 96%?  Too high. Make that about 90%.  Maybe 85%.  It is definitely high enough though that Democrats wanting to win control of the Senate would be wise to stop sending money to long-shot McConnell challenger Amy McGrath and instead invest that money in more winnable races.

Your comment on Republican City-Councilors is wrong. Josh Bain was literally just caucused in the last few months to represent Decatur Township. Mike Dilk was just elected last year as was Paul Annee and Michael Hart. Only Mowery (who reps Franklin Township) has been on the Council for longer then a year. He was caucused in to replace Aaron Freeman when Freeman was elected to the State Senate in 2016. They aren't the same councilors who voted for Ballard's proposals (none of them were elected at the time). So your blind hatred of all things Republican is starting to cloud your common sense.

I've been a Republican my entire adult life. So I'm pretty sure I don't have a "blind hatred for all things Republican." I don't believe giving away taxpayer money to developers and contractors, i.e. corporate welfare, huge budget deficits, tariffs, increased executive power, undermining federalism so our national government has more power, putting kids in cages, giving aid and comfort to tin pot dictators while undermining our allies, etc. are Republican ideas.

I became active in GOP politics in Indianapolis in 1984. In the 36 years since, I have never seen Republican (with the exception maybe of Christine Scales) or Democratic politicians oppose corporate welfare. I am not aware of any of the new council Republicans opposing corporate welfare during their campaigns. The vote in the council committee, which includes Republicans, was UNANIMOUS.

While I believe my comment was as to the long, long history of local Republicans and Democrats unanimously supporting corporate welfare, and in the process stiffing taxpayers, I would be thrilled if one of those new council Republicans stood up for taxpayers instead of well-trenched corporate interests when it comes to the final up or down vote on the bond proposal. I won't hold my breath, however.