Turns Out Jerry Falwell, Jr. Was Not Living the Christian Life He Insisted Students at Liberty University Live

Shocker!  Turns out that Jerry Falwell's Jr.'s was not living a Christian life.  Rueters Investigates reports:

In a claim likely to intensify the controversy surrounding one of the most influential figures in the American Christian conservative movement, a business partner of Jerry Falwell Jr has come forward to say he had a years-long sexual relationship involving Falwell’s wife and the evangelical leader. 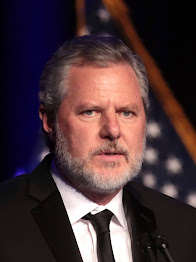 pool attendant at the Fontainebleau Miami Beach hotel in March 2012. Starting that month and continuing into 2018, Granda told Reuters that the relationship involved him having sex with Becki Falwell while Jerry Falwell looked on.

Granda showed Reuters emails, text messages and other evidence that he says demonstrate the sexual nature of his relationship with the couple, who have been married since 1987. “Becki and I developed an intimate relationship and Jerry enjoyed watching from the corner of the room,” Granda said in an interview. Now 29, he described the liaisons as frequent – “multiple times per year” – and said the encounters took place at hotels in Miami and New York, and at the Falwells’ home in Virginia.

His friendship with the Falwells eventually soured, Granda told Reuters, in part because he wanted to dissolve his ties with the couple and fell into a business dispute with them.

Several hours after the Reuters article appeared, the Washington Post and other U.S. media reported that Falwell had stepped down as head of Liberty University, the Christian school he has run since 2007. But later Monday, Falwell disputed those accounts. “I have not resigned,” he told Politico. “I will be on indefinite leave.”

Falwell, 58, had taken an indefinite leave of absence earlier this month from Liberty. That step, announced in a terse statement from the school’s board of trustees, came days after Falwell posted, then deleted, an Instagram photo of himself with his pants unzipped, standing with his arm around a young woman whose pants were also partly undone. Falwell later told a local radio station that the picture was meant as a good-natured joke.

(Editor's Note:  I listened to a recording of that radio interview during which Falwell's speech was slurred as if intoxicated.)

If Falwell does step down, his departure from that high-profile perch would represent a remarkable fall from grace for a man who has been a potent force in American conservative politics. His surprise 2016 endorsement of Donald Trump helped the twice-divorced New Yorker win the Republican nomination for president.

Becki Falwell, 53, is a political figure in her own right. She served on the advisory board of the group Women for Trump, which advocates for the president’s reelection campaign. She also spoke as part of a panel with her husband and Donald Trump Jr at last year’s Conservative Political Action Conference, or CPAC, the signature annual gathering of conservatives. Jerry Falwell and others refer to her as “the first lady of Liberty University.”

This is not the first media report that Jerry Falwell, Jr. might not be living the Christian life he insists students at Liberty University follow.  In May 2019, former Trump attorney fixer Michael Cohen said he had helped Falwell deal with racy photos which might surface during the 2016 campaign in which Falwell fully endorsed Donald Trump.

In September of 2019, Brandon Abrosino, a graduate of Liberty University penned a lengthy story published by Politico, on the climate at the school and Falwell, Jr.'s not so Christian behavior:

Over the past year, Falwell, a prominent evangelical leader and supporter of President Donald Trump, has come under increasing scrutiny. News outlets have reported on business deals by Liberty University benefiting Falwell’s friends. Trump’s former personal attorney Michael Cohen claimed that he had helped Falwell clean up racy “personal” photographs.

Based on scores of new interviews and documents obtained for this article, concerns about Falwell’s behavior go well beyond that—and it’s causing longtime, loyal Liberty University officials to rapidly lose faith in him.

More than two dozen current and former high-ranking Liberty University officials and close associates of Falwell spoke to me or provided documents for this article, opening up—for the first time at an institution so intimately associated with the Falwell family—about what they’ve experienced and why they don’t think he’s the right man to lead Liberty University or serve as a figurehead in the Christian conservative movement.

In interviews over the past eight months, they depicted how Falwell and his wife, Becki, consolidated power at Liberty University and how Falwell presides over a culture of self-dealing, directing university resources into projects and real estate deals in which his friends and family have stood to make personal financial gains. Among the previously unreported revelations are Falwell’s decision to hire his son Trey’s company to manage a shopping center owned by the university, Falwell’s advocacy for loans given by the university to his friends, and Falwell’s awarding university contracts to businesses owned by his friends.

“We’re not a school; we’re a real estate hedge fund,” said a senior university official with inside knowledge of Liberty’s finances. “We’re not educating; we’re buying real estate every year and taking students’ money to do it.”

Liberty employees detailed other instances of Falwell’s behavior that they see as falling short of the standard of conduct they expect from conservative Christian leaders, from partying at nightclubs, to graphically discussing his sex life with employees, to electioneering that makes uneasy even those who fondly remember the heyday of the late Rev. Jerry Falwell Sr., the school’s founder and Falwell Jr.’s father, and his Moral Majority.

In January, the Wall Street Journal reported that in the run-up to Trump’s presidential campaign, Cohen hired John Gauger, a Liberty University employee who runs a private consulting firm, to manipulate online polls in Trump’s favor. Not previously reported is the fact that, according to a half-dozen high-level Liberty University sources, when Gauger traveled to New York to collect payment from Cohen, he was joined by Trey Falwell, a vice president at Liberty. During that trip, Trey posted a now-deleted photo to Instagram of around $12,000 in cash spread on a hotel bed, raising questions about his knowledge of Gauger’s poll-rigging work. Trey did not respond to requests for comment.

Don’t forget about our piece of Falwell, JR from 2018. I will put a link to it below. He like his dad before him was full of it!