Yesterday, at the Democratic National Convention, Michelle Obama delivered a speech in which the former First Lady outlined what the 2020 presidential election is really about:

Empathy: that's something I've been thinking a lot about lately. The ability to walk in someone else's shoes; the recognition that someone else's experience has value, too. Most of 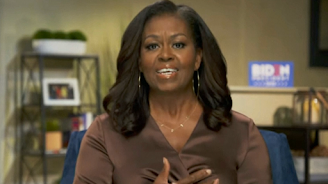 us practice this without a second thought. If we see someone suffering or struggling, we don't stand in judgment. We reach out because, "There, but for the grace of God, go I." It is not a hard concept to grasp. It's what we teach our children.

And like so many of you, Barack and I have tried our best to instill in our girls a strong moral foundation to carry forward the values that our parents and grandparents poured into us. But right now, kids in this country are seeing what happens when we stop requiring empathy of one another. They're looking around wondering if we've been lying to them this whole time about who we are and what we truly value.

They see people shouting in grocery stores, unwilling to wear a mask to keep us all safe. They see people calling the police on folks minding their own business just because of the color of their skin. They see an entitlement that says only certain people belong here, that greed is good, and winning is everything because as long as you come out on top, it doesn't matter what happens to everyone else. And they see what happens when that lack of empathy is ginned up into outright disdain.

They see our leaders labeling fellow citizens enemies of the state while emboldening torch-bearing white supremacists. They watch in horror as children are torn from their families and thrown into cages, and pepper spray and rubber bullets are used on peaceful protestors for a photo-op.

Sadly, this is the America that is on display for the next generation. A nation that's underperforming not simply on matters of policy but on matters of character. And that's not just disappointing; it's downright infuriating, because I know the goodness and the grace that is out there in households and neighborhoods all across this nation.

And I know that regardless of our race, age, religion, or politics, when we close out the noise and the fear and truly open our hearts, we know that what's going on in this country is just not right. This is not who we want to be.

Michelle Obama is right.  This election is not about issues.  It is about the character of our nation.  It is about who we, as a people, want to be.

Only then did the former First Lady turn to the current occupant of the White House:

So let me be as honest and clear as I possibly can. Donald Trump is the wrong president for our country. He has had more than enough time to prove that he can do the job, but he is clearly in over his head. He cannot meet this moment. He simply cannot be who we need him to be for us. It is what it is.

I never jumped on the Trump train because I had long followed Trump's career and knew him quite well.  Trump has always been a joke, a huckster pretending to be a successful businessman kept afloat by his father's money and loans he would never repay.  The only thing Trump has ever succeeded in was becoming a reality show star.  I knew Trump lacked the temperament, the intelligence, the life experiences needed to be President of the United States.  My only mistake was underestimating the depth of Trump's psychological problems, which further compounded his other limitations.  I had no idea how spectacularly bad a President he would turn out to be.

"He is clearly over his head."

What I find so utterly frustrating is that many, perhaps most, of my fellow Republicans would admit Trump is over his head, that he lacks the basic competence to be President.  Yet they continue to support Trump anyway.  Why? Because Trump makes the liberals mad!  That and the Democrats are bad on the issues.

Not that Trump is right on the issues.  So many positions he takes are antithetical to traditional GOP conservativism.   Trump has expressed hostility to the idea of federalism, limited government, and restrained executive power.  At every turn, he has refused to be constrained by constitutional limits.  Trump ran up huge budget deficits, even before the pandemic, and saddled American consumers with higher prices due to tariffs.  He conveys disdain for America's traditional support for human rights, and expresses a fondness for dictators (even when they're paying bounties for terrorists to kill American soldiers), while undermining our allies at every turn.

But even if Trump were right on the issues, the fact remains he is spectacularly incompetent.  Trump's failure to deal with Covid-19, a failure that has resulted in 170,000 dead Americans, starkly highlights that fact.

"He is clearly over his head."