Today, a group called the "Young Conservatives of Southern Indiana" held a rally at the Indiana Statehouse to protest state and local mandates that Hoosiers wear masks to prevent spread of the the Covid-19 virus which has killed 160,000 Americans.  Many of the protesters wore "Trump" hats and 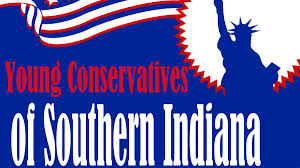 Meanwhile, President Trump was in Washington signing four executive orders on taxing and spending policy, bypassing a Congress that not yet acted.  As I recall, one of the complaints we Republicans had about President Obama was that he believed he could do executive orders whenever Congress failed to act.

Maybe the "Young Conservatives of Southern Indiana" might take two seconds to consider the potential impact on our freedoms of the precedent of President simply being to adopt whatever policy he prefers by signing an executive order instead a bill passed by Congress.   Maybe members of that organization might consider what this precedent will mean when a Democrat is elected President.

Young Conservatives of Southern Indiana might be "young," but they are certainly not "conservative."