Instead of adopting a detailed political party platform setting forth its views on the issues of the day, Republicans delegates to this year's quadrennial national convention chose to adopt a statement that they "enthusiastically" support President Trump.

So if Trump comes out in favor of abortion, higher taxes, increased welfare, reparations, and immigration amnesty, Republicans support those policies?    Absolutely!  If Dear Leader supports something, that makes it by definition the right policy.

Yeah, that is a personality cult, not a political party.

But wait...I'm sure there have been other occasions when the Republican Party chose against adopting a 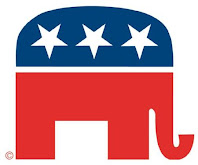 Yep, every single presidential election since it was founded featured the GOP adopting a party platform.  Not once did the Republican Party choose not to adopt a platform enunciating what the party stood for, even when the ticket was lead by statesmen such as Abraham Lincoln, Teddy Roosevelt and Ronald Reagan.

For the record, I also researched the history of Democratic Party platforms.  Founded in 1828, the Democratic Party started adopting platforms in 1840 when it nominated Martin Van Buren for President.  Van Buren went on to lose the general election to Whig candidate William Henry Harrison.  The Democrats have adopted a party platform for every presidential election since 1840, not missing a single election.  FYI, the aforementioned Whig Party was the very first American political party to adopt a platform, which it did in 1832 in support of its nominee Henry Clay.

So, the GOP choosing to adopt a statement in support of Donald Trump instead of a platform enunciating the party's principles is a very big deal indeed.

The poor old Republicans are muddling along as best they can. You can certainly now claim that the R platform is not divisive.
This is not similar to the Indiana Republican Platform in which bait and switch was only lately discovered by their delegates and those rock ribbed conservatives leading the Party (liars all of them) were caught with their paws in the bait and switch cookie jar. I suppose one could make analogy to the British Constitution which isn't written. If you are following all of the R speakers at their version of a convention it won't be too hard to see that it is unified and has a great number of policy positions outlined in some detail. What they all recognize is the the R ship sinks or swims with Trump. You fail to see this, wedded as your are to Indiana sorts of R "leaders" who, if I recall correctly, preferred Kasich to Trump. Whata bunch of maroons? Of course, they didn't have much use for Mike Pence either but he is VP and they are trying to push that dead carcass, HowCome? over the finish line as some form of Republican. I suppose you can hold your nose and vote for the dead horse, you know, be loyal to what you have and keep the Black Man down? No, wait, Woody isn't to be kept down, it was the AG, the competent one.

Leon, I do not get why you are against having a President who is honest, competent and has integrity? Someone who actually knows what he is doing? Isn't 180,000 dead Americans, proof enough of Trump's utter incompetence?

GOP Senate and House candidates are going down in 2020 precisely because they tied themselves to a two bit con man, a fake Republican who has given money to Hillary Clinton, Chuck Schumer, Nancy Pelosi and Kamala Harris. Trump, who is hardly a conservative, has been on every side of every issue, including immigration, minimum wage, Planned Parenthood, abortion and the war in Iraq. The only thing Trump has ever succeeded in in life is being a reality show star and narrowly beating out in the Electoral College the most unpopular Democrat ever nominated. If you want to complain about socialism blame the Republicans who bet everything on that clown Donald J. Trump. It will take a generation to rebuild the movement after Trump.