In politics, altering the image of a political opponent in an advertisement is considered to be crossing an ethical line.   This is even more so true when the alteration is being done to exploit racial attitudes.  I remember a number of years ago when the GOP ran attack ads against then Indianapolis congresswoman Julia Carson, an African-American, in which her face was darkened.  The tactic was roundly criticized in the media and, as I recall, prompted an apology from the Republicans.

I guess we shouldn't be surprised in the era of Trump that some Republican candidates have chosen to cross that ethical line and exploit voters' prejudices.  The Hill reports on Trump's No. 1 enabler, South Carolina Senator Lindsey Graham using the tactic against his African-American opponent, Jamie Harrison:

Democrat Jaime Harrison hit Sen. Lindsey Graham (R-S.C.) on Wednesday for running a Facebook ad that features an apparently darkened image of the Senate hopeful in the background, suggesting that the ad carries racist undertones. 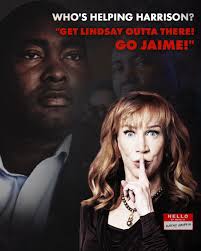 room for people who looked like me,” Harrison, who is Black, said in a statement, later adding that “Lindsey Graham might have darkened my face — but it’s Lindsey who the people of South Carolina can’t recognize.”

The ad, which began running on July 23 and cost less than $100, according to Facebook’s ad library, features an image of comedian Kathy Griffin superimposed over a darkened background and a photo of Harrison. The effect used on the photo makes Harrison’s skin tone appear darker.

In Georgia, Republican Senator David Perdue, another huge Trump supporter in the Senate, is squaring off a Jewish candidate, Jon Ossoff.  Since the Ossoff's name is not a tip he is Jewish, how could Perdue get the message across to Georgia voters? Why, of course, make Ossoff's nose bigger!  If the voters still miss that Ossoff is Jewish, just add in a better known Jewish politician to the ad.  CNN reports: 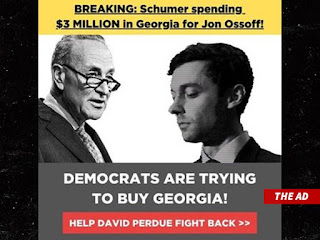 The Ossoff campaign noted that both he and Schumer are Jewish.

The Perdue campaign deleted the ad following a report by the Jewish publication The Forward. A Perdue campaign spokeswoman said the size of Ossoff's nose in the ad was an "unintentional error" caused by an "outside vendor" who applied a filter that "distorted the image."

First, I'm not sure what type of "filter" makes a Jewish candidate's nose appear larger.  Second, Trying to blame the tactic on an "outside vendor" is pretty silly since the campaign screens and approves those ads before they are published.   But at least the Perdue campaign apologized and took the ad down, two steps that Graham's campaign has thus far refused to take.

Returning to the Graham ad, some readers will say the darkening of Harrison's skin is irrelevant because voters already know he is African-American. Vesla Weaver, who teaches political science at Harvard University, has studied the impact of the darkness of one's skin on their electoral chances.  She concluded that it is not just the race of the candidate which matters, but also how dark one's skin is:

Color in this study had a large, unambiguous effect that was independent of race. The magnitude of the effect of race on candidate evaluation depended primarily on color. With few exceptions, darker skin magnified the effect of race, exacerbated stereotypical beliefs about candidates, and made certain categories of voters more or less likely to support the candidate. Light-skinned black candidates were more immune from race effects in both directions (bias for and against). Like race and gender cues in electoral politics, skin color also operated as a shortcut in candidate evaluation. Sensitivity to skin color was especially likely when subjects were not aware of differences based on racial categories. In the situation of a same-race election between black candidates, the effect of darker color was consistently associated with negative reactions. Candidates who shared the same race were nevertheless treated and evaluated quite differently. Future studies might build on this research by evaluating the impact of color for minority voters.

Historical norms and legal precedents that evolved to treat blacks as all of a group and ignore internal variation by mixed ancestry and color prescribed the understanding and practice of race in ways that meant that color did not become a salient identity, even while large intraracial disparities and color bias persisted. This study, like others in sociology and psychology and economics, has shown that intraracial variation by color has an unmistakably large impact on voters’ perceptions of candidate quality. However, studies of racial cues, audit studies of discrimination, and racial stereotyping continue to design their studies that treat race as a binary category and racial groups as internally consistent, potentially missing a source of racial bias that operates without awareness of egalitarian norms. Continuing to ignore an important form of racialized perception risks damaging our studies. For example, experimental studies that alter the race of the target and measure policy preferences may find that their results are improved by being attentive to the phenotypical variation among blacks.

Color has recently emerged in several studies as an important influence on cognitive perception and behavior, such that the extent to which a person appears ‘‘stereotypically Black’’ influences judgments of character, criminality, and whether a victim of a natural disaster exacts sympathy, as well as shaping actual life chances and experience, such that the outcomes of minorities are further stratified by color. However, the possibility that color may play a role in racial bias has been a central deficit in studies in race politics. The point of this exploration confirms that skin color bias is an understudied, albeit significant, aspect of white racial attitudes.