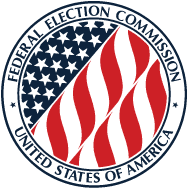 Of course, most people involved in politics know there is a $2,800 limit on individuals giving money to federal candidates, such as someone running for Congress or President.  Other people may be aware that corporations are completely banned from donating to federal candidates, including in kind contributions such as a corporation providing an airplane or a fleet of vehicles to a favored candidate.

Another campaign finance law which got more publicity during the Trump years is that foreign nationals and foreign governments are strictly forbidden from doing money or making in kind contributions (such as opposition research) in American federal elections.

The FEC has the authority to launch investigations and take action to enforce these federal campaign finance laws.  Commissioners, who run the FEC serve staggered six year terms, with two seats up every two years.  The appointments are made by the President and confirmed by the Senate.  No more than three of the six Commissioners can be of a particular political party. If a Commissioner's term is up, he or she can remain on the Commission until replaced.  In fact, all three current sitting FEC Commissioners terms officially expired long ago, the most recent one was up in 2013.

To taken an enforcement action requires, the FEC needs to have a quorum of Commissioners present.  As of last Fall, two Commissioner positions were vacant.  With four members, the FEC had a quorum (barely) to take enforcement actions.  But then, on August 26, 2019, FEC Commissioner Matthew Peterson, a Republican, suddenly resigned from the Commission, leaving the FEC's current and future enforcement actions in limbo.  Peterson was may be best known for his December 2017 performance before the Senate Judiciary Committee.  Appointed by President Trump to a DC federal judge position, Peterson failed to impress even the GOP majority in that chamber when Peterson could not answer several basic legal questions posed by Senator John Kennedy, a Republican from Louisiana.  Peterson's performance during the confirmation hearing went viral and he withdrew his name from consideration.

Despite the fact President Trump could appoint all six FEC Commissioners, he has only appointed only one during his three plus years in office.  In 2017, he appointed Trey Trainor to replace Peterson who expected to become a federal judge.  Trainor, an Austin, Texas based attorney and fervent supporter of the President, was know for fighting the Texas Ethics Commission over campaign finance disclosure and having a deregulatory attitude toward money in politics.  His appointment made ethics watchdogs and even some Republican Senators queasy.  Further, the appointment violated the previous practice of a President nominating, at the same time, two candidates, one Republican, one Democrat, to the bipartisan FEC.  When Trainor and Peterson's appointments went nowhere in the GOP-controlled Senate, Peterson stayed on as FEC Commissioner.  That is until last Fall when Peterson suddenly resigned as FEC Commissioner, providing no reason for his departure.

In a February 21, 2020, article, the publication Government Executive explained the impact of Peterson's resignation:

At the start of 2019, the FEC had 344 enforcement matters at various stages and 101 were awaiting commission action (such as a vote or dismissal). By September, the commission was able to get the numbers down to 272 for enforcement matters at all stages and 63 awaiting commission action, according to Weintraub’s year-end report. However, with the loss of a quorum the caseload has increased to about 300 and the number of cases awaiting action rose to 119, said Weintraub.

“Honestly the biggest story at the FEC is what’s not happening and that is anything that would require a working commission. It’s really unfortunate,” said Weintraub. The commission is supposed to have a six-member board, and it needs four members for its proceedings to be valid. With only three commissioners the agency cannot launch investigations, issue advisory opinions, publicize rules and make decisions on enforcement actions. This includes dealing with cases involving “illegal, undisclosed and even foreign money spending into election 2020,” the Center for Public Integrity stated.

With the presidential election less than a year away, The New York Times on Thursday reported that intelligence officials warned lawmakers last week about “what appeared to be new information” on Russian attempts to interfere in the 2020 election, just like in 2016. Election interference can take on many forms—voting machine hacking, cyber attacks, disinformation campaigns on social media and foreign spending through political action committees.

Given the ongoing threats of foreign interference in the 2020 elections, "to not have the FEC able to take action right now is deeply concerning,” Daniel Weiner, a former FEC senior counsel, now Brennan Center for Justice deputy director for election reform, told NPR in late-August. He said the agency is on the "front-line" of combating foreign interference and it will be “impossible until that seat is filled” to take up measures to prevent foreign manipulation.

Leaving the FEC without enforcement power means that, should there be a violation of federal campaign finance law that has criminal penalties attached, such as foreign governments trying to aid the Trump Campaign, that law can only be enforced by Attorney General Bill Barr's Justice Department.  Good luck with that.