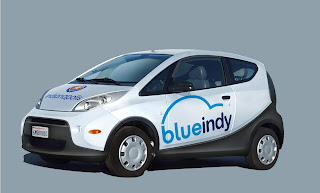 Late last year it was announced that the electric car service company, BlueIndy, was ceasing operations.   BlueIndy was one of the many hair-brained ideas that came during the Ballard administration, ideas that almost always involved taxpayers subsidizing private business.

This is how Blue Indy describes itself:

BlueIndy is a subsidiary of the Bolloré Group which is among the world's 500 largest companies.

Despite being given free prime parking spaces throughout Indianapolis, BlueIndy could not turn a profit.  Not a surprise.  The spaces were almost always occupied by unrented BlueIndy vehicles taking up valuable parking spaces.

If you have been downtown lately, you will know it is a mess for those of us still driving vehicles  Scores of traffic lanes have been taken away in favor of dedicated Red Line bus and bike lanes.  Numerous traffic signals have been added providing different options which do little more than confuse everyone.  In some places, parking has been moved off the curb so that parked cars appear to be in traffic lanes.

The other day I drove from 16th and Capital to Maryland and Capitol, about 2 miles.  It took me 30 minutes.  Downtown traffic was just one big parking lot at rush hour.

But let's return to the parking issue   Finding on-street parking in the middle of the day near the City-County Building is virtually impossible.  You might drive around for 30 minutes looking for a space.  Scores of parking spaces have been removed to create dedicated bus and bike lanes.  And then you have the numerous BlueIndy cars taking up valuable parking spaces.

Not only have Indianapolis residents lost out on valuable parking spots, we are paying for those lost spots.  Yep, when Indianapolis privatized on-street parking several years ago (another hair-brained Ballard idea), we agreed to pay ACS (ParkIndy) for each parking spot taken out of commission as if they were fully-occupied six days a week.

When BlueIndy moves out of the spots, city officials need to return those spots for the use they were intended - on street parking.
Posted by Paul K. Ogden at 12:59 PM 4 comments:

In a few hours the third presidential impeachment "trial" in American history will begin.  I hesitate to call it a "trial" because it is still not clear that the Republican-controlled Senate will agree to hear witnesses and evidence, or even whether that body will consider the documents and witness testimony gathered by the House.

Andrew Johnson was the first President impeached. That effort, in 1868, fell one vote short of 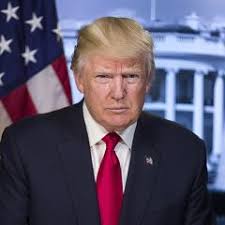 conviction in the Senate.  In 1998, President Bill Clinton was impeached for perjury and obstruction of justice.  His conviction on those charges failed by votes of 45-55 and 50-50.  In the 100 member Senate, 67 votes are needed for a conviction.

At the time, I supported Clinton's removal from office.  My view over the years has changed however,.  I still believe Clinton committed a felony (perjury) and, no, you don't get a free pass to lie when the issue is sex.  Also, it should not be overlooked that Clinton was carrying on a sexual affair with a subordinate in the workplace.  That's not right and to the Democrats credit, most at the time acknowledged that Clinton's conduct was wrong.  But most of those Democrats also took the position that Clinton's conduct was not impeachable and I agree with that now.  As heinous as Clinton's conduct was, that conduct did not directly relate to his presidential duties.  I think that should generally be the standard for impeachment.

The Trump's impeachment is most similar to the impeachment charges against Richard Nixon that were voted out by the House Judiciary Committee in 1974.  Those charges were 1) obstruction of justice for Nixon's attempt to impede the investigation of the Watergate break-in; 2) abuse of power
for using his office to compel federal agencies to target his enemies; and 3) contempt of Congress for refusing to comply with congressional subpoenas.

I was only 13 in 1974, but I followed the Nixon impeachment hearings quite closely.  (Nixon, of course, resigned before the full House could impeach him.)  Donald Trump's transgressions make Richard Nixon's look like jaywalking. There is no comparison.

As the 2020 election approached, Donald Trump decided he would cheat again.  This time he used his office to "encourage" Ukraine into announcing an investigation of his chief political rival, Joe Biden, so he could try to paint Biden as "corrupt."  (I find it ironic that the most corrupt President in my lifetime, by far, thinks corruption is a good issue for him.).  To accomplish this goal, Trump, through intermediaries, offered Ukraine's President Zelensky a bribe - already appropriated military aid that Ukraine desperately needed for survival in defending itself against Russia.  (Never mind that Trump had no actual authority to impound the congressionally appropriated money.)  Trump was willing to put America's national security at risk for his own selfish, political reasons.  So much for Trump being a "patriiot."

And, no, Trumpers, the "transcript" (it was actually just notes) of the phone call does not exonerate Trump. Not even close.  Not that the phone call is the only evidence of Trump's Ukraine scheme.  Far from it.

When the House tried to investigate the Ukraine scheme, Trump immediately went into cover-up mode, attempting to block executive branch witnesses from testifying and refusing to turn over a single document (beyond the so-called "transcript").  The claim that executive privilege allows Trump to do this is laughable.  Nixon attempted to take the same approach when the White House recordings were subpoenaed.  The Supreme Court ruled 8-0 that Nixon executive privilege claim as to the tapes was invalid.  While a President can exert executive privilege when applicable, that privilege is not a blanket that allows a President to bar all witnesses or refuse to hand over any documents. The notion that Congress has no recourse but to run to court every time the President or other executive branch official refuses to comply with a subpoena by offering a bogus claim of blanket executive privilege is nonsensical.

The House's impeachment charges against Trump are for 1) abuse of power; and 2) contempt of Congress.    Not only are both charges richly deserved, they only scratch the surface for what Trump could be charged with.

As a Republican, I am greatly disheartened that so many people in my party, including those in Congress, want to give Trump a pass on behavior they would never in a million years accept from a Democratic President.  You would think they'd try to argue otherwise, but most do not.  It is a sign of today's tribalism, that they don't even protest when you point out their hypocrisy.  All that matters is what uniform the players are wearing.

History is watching.  History will judge Republican Senators harshly if they abdicate their responsibility to carefully consider the evidence and, instead, exonerate an obviously guilty President.
Posted by Paul K. Ogden at 6:25 AM 10 comments: