After receiving a lot of positive feedback for the race I ran trying to unseat then State Rep. Jeb Bardon from a Pike Township based seat in 2000, I was persuaded by a couple state representatives to run for Marion County Clerk.  Months into that endeavor, in the midst of attending scores of Republican meetings across the county, I received a call from a high level Marion County GOP operative.  He told me that party leadership would be supporting my GOP slating opponent because I 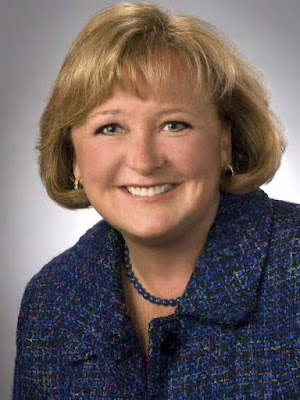 "could not be controlled." While I might vote the way Marion County GOP leaders wanted 90% of the time, they wanted someone who will support them 100%, even when what they wanted wasn't in the public's best interest.

It was probably about that time frame, 2001-2002, that I met  Christine Scales at a Washington Township GOP meeting.  Christine was later elected to her northside Washington Township city-county council district in 2007, serving three terms.  Christine Scales proved be a tireless public servant who always insists on putting the best interests of her constituents first, even when her party's leadership wanted her to vote the other direction.  In short, Christine was the elected official who "could not be controlled" by party bosses.

Okay, "tireless" may not be the right term.  No doubt that after three terms of non-stop fighting on behalf of her constituents, Christine is, understandably, very tired.  For 12 years she has been a flurry of activity.  Her chief interest has always been public safety.  I remember well her fight to ensure northside residents had sufficient fire coverage when the city tried to eliminate a ladder truck.  She also has been a good friend to law enforcement, fighting to ensure they had the resources and equipment to make Indianapolis neighborhoods safer.

What I like most about Christine though is that she has always been a straight shooter.  She always is willing to tell you what she thinks and if her words step on some political toes in the process, so be it.  And Christine has stepped on a whole lot of toes while in office.

To understand the arc of Christine's political career requires an understanding of Indianapolis/Marion County politics.  Although party control in the county has gradually shifted from Republican to Democrat these past few decades, it has always been developers, contractors, and big law firms who have called the shots.  If there is some project that will result in taxpayer money ending up in the pockets of these powerful special interests, you can bet that the project will be supported by Indianapolis' political leaders, regardless of the party.  Even when the Indianapolis GOP faces a drubbing at the polls, which will most surely happen today, you don not see Republican mayor or council candidates speaking out for Indy residents against the wishes of  those special interests.  It is a line that candidates, even those facing sure defeat, will not cross.

Christine never got that memo.  Or more likely, knowing her, she did get the memo and threw it in the trash.  Regardless, Christine went about doing her job, fighting for constituents and getting re-elected by voters who liked and appreciated her putting community service ahead of special interests.

Proposal 364, which is one of the last measures Christine initiated on the Council, is emblematic of her work.  During her time in office, Christine attended scores of committee meetings in which advocates for various proposals would blindside councilors with reams of documents filled with stats and data for why the councilor should support, or oppose, some measure.  Naturally, councilors presented with the documents for the first time at the committee meeting do not have the time it to digest the information (considering in the process its veracity as well as alternative information), prior to casting a vote on the measure under consideration.  Proposal 364 is a good government measure aimed at requiring that those documents be provided to councilors 48 hours in advance of the committee meeting.  If the documents are not provided in a timely fashion, Christine's measure provides that a committee vote can be taken to delay consideration of the proposal until the next scheduled meeting.

While Proposal 364 passed out of committee unanimously, council leaders have apparently stalled the measure, quite possibly as a final personal affront to Christine who to the very end insists of putting her constituents ahead of Indy's special interests who exercise the political clout in the city.

During Christine's last term in office, she switched her partisanship from Republican to Democrat.  But, regardless of what party she affiliated with, she always put the voters first.   Thank you, Christine, for all you did and tried to do.  Indianapolis is better off because of your service.
Posted by Paul K. Ogden at 1:27 PM

Look no further to examine the demise of Marion County Republican Party. Your piece is a bit light on just how this lady
was backstabbed by the Republican Party cretins. R's are not very good at dirty low down skunk moves either then or currently with their attempted exorcism of AG Hill. While Mr. Hill is more of a mainline Republican were he to switch political parties is there
any doubt that being a real conservative he would easily win any statewide office that happened to be contested by an R light sort?
Democrats will win nothing with Pelosi brand D's but as Mr. Gregg showed, even a poser conservative D could be a shoo in. At
any rate, a post lacking polls is progress and the absence of the Trump Syndrome is welcome. Good column.

This clearly describes who Christine is and how she governed. It is sad that we cannot say the same of most of her constituents.