As I've pointed out on this pages before, despite an ongoing election in Indianapolis, local candidates have thus far refused to listen to listen to the complaints of voters negatively impacted by the (unnecessary) elimination of traffic lanes as part of the implementation of a new rapid bus system.

Now that the Red Line is in place, next up is the Blue Line which will result in the elimination of two 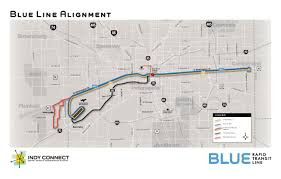 travel lanes.  On West Washington Street that means travel will be limited to ONE eastbound and ONE westbound lane.  Drivers seeking to avoid the resulting congestion in that commercial corridor will divert to nearby residential streets.   Business establishments on West Washington will lose customers and residents near Washington Street will have to deal with increased traffic and see their property values lowered.


INDIANAPOLIS (WISH) — IndyGo’s Blue Line Rapid Transit System will run from the east side to the airport in the future, but business owners along the West Washington Street route are pushing for changes to the proposed plans.

The project is expected to have a designated lane for the bus, much like the Red Line. West Washington Street will go from four lanes to two, but store owners fear the Blue Line will negatively impact their businesses.

Many told News 8 the road isn’t efficiently designed for an exclusive bus lane and will create more congestion.

“It’s hard for us to get trucks in and out of here as we do get a lot of freight in and trying to bring obviously motorcycles in and cars in to park in front of the building which is what we really want,” said Mike Dreyer, owner of Dreyer Honda.

“Instead of people using this main road they’ll divert off onto the residential side streets which causes traffic problems for the residents,” said Rachel Hawkins, owner of Markin Sales.

IndyGo plans to build bus stations in the middle of Washington Street and remove some designated turning lanes. Some business owners feel that could steer potential customers away.

“It’s gonna be easier for someone to just continue west and find the next local shop or business that they’re looking for rather than turning back around and making it an inconvenience for themselves,” Roy Reynolds, owner of Reynolds Body Shop said.
...

One thing I learned while writing about this subject is drivers apparently are not supposed to turn left across that raised bump in the middle of the rapid bus transit lane.  They are supposed to go to the next intersection and then do negotiate a tight U-Turn, against the traffic, to return to the business one originally wished to turn left into.  Many people, obviously, are not going to want to do that and will instead choose a business down the road where a u-turn is not needed.
It is important to emphasize that the City's elimination of traffic lanes for the rapid bus system is contrary to the study touted by the City on the web page of the Indy Connect Central Indiana's Regional Transit Initiative.  That study said that "it is not realistic to expect ridership increase under even the most favorable conditions to approach the threshold for exclusive lanes."  Yet despite this advice, city officials have decided to go ahead anyway and eliminate traffic lanes, despite the impact on commuters and residents.
West Washington Street business owners are hosting a meeting on Wednesday about the subject, the details of which are below:
When:  October 16, 2019 at 5:30 pm
Where:  Wayne Township Government Center
5401 W. Washington St.
Indianapolis, IN  46241
Posted by Paul K. Ogden at 11:08 AM

That's absolutely correct, because transit and transit-oriented development are a religion to some people. Facts and commonsense have nothing to do with it. Frankly, Hogsett from sources I have is not gung-ho on this but like most politicians he will ride the stupid train until it derails and promise to fix it. Give credit to the writer's of that study who did not lie, but when liberal doctrine replaces traditional religion, this is what you get - climate-change religious fervor bringing non-sensical transit, bike lanes and other unrealistic endeavors as city priorities.