Normally a political analyst would not compare a presidential election to a mid-term because they have dramatically different turnouts.  Tuesday's mid-term turnout rivaled that of a presidential election, so a comparison is possible so I decided to look at Indiana's congressional races 2016 v. 2018.  Here is a table with the information I gathered:


The smallest GOP decline came in the mostly rural 9th Congressional district located in the southern part of the state.  The fact Hollingsworth held onto that district by approximately the same margin as 2016 despite having a well-funded challenger who was constantly on television is significant. 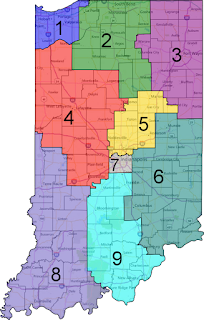 Congressman Jim Banks saw his margin trimmed the most, losing 18.3% on his winning margin in CD 3.  However, he still won CD 3 by nearly 30 points so that district is far from being competitive.

In CD 2, Republican Jackie Walorski saw her winning margin trimmed from 22.3% to 9.6% . While that seems close, Walorski pre-Trump has experienced closer races in the north central Hoosier district.

In the one Indiana Democratic congressional district with an available comparison, the 7th District based entirely in Indianapolis, the Republican losing margin increased from 24.3% to 29.8%.

What undoubtedly has allowed Hoosier Republican members of Congress to avoid the fate of many of their losing colleagues is that every Republican district in Indiana has a substantial amount of rural area in it.  Further, instead of using the Indianapolis’ suburbs to create a single congressional district, several congressional districts were drawn to cut into the Indianapolis suburbs.   The result is that GOP congressional incumbents avoided the election night loss experienced by many of their colleagues.

Republican losses were due, in part, to the media creation =POS John McCain. R's blathered for years about Obamacare and how the R's were going to fix it. Judge Roberts did not fix it, but he gave it a mortal blow. The House passed some sort of fix and it went to the R Senate where the traitor, McCain, killed it and the Republican Brand. He was an asshole.

I believe anyone who attacks American values like freedom of speech, freedom of press, due process of law, the rule of law, federalism and separation of powers, someone who constantly attacks America's allies while lending aid and comfort to dictators, someone who likely worked with the Russians to win an American election, should be called a "traitor." That doesn't describe McCain though. it describes Donald J. Trump.

Good grief! The GOP lost because of Trumps childish antics! Besides weren’t you saying the GOP wouldn’t take too many loses in the election?